The Atlanta Streetcar’s long-awaited extension on an eastern segment of the Atlanta BeltLine could be running by 2027, said MARTA officials at a May 27 meeting where they unveiled a proposed route and stop locations. The line would extend between Edgewood Avenue and just south of Ponce de Leon Avenue.

But first the transit agency will spend months weighing what are sure to be vocal responses from the public on such concepts as fences or walls to prevent BeltLine users from straying onto tracks and maybe killing on-street parking or even closing private-car traffic on sections of the route. And MARTA will have to soothe lingering skepticism about the effectiveness of the streetcar, whose current Downtown loop is notorious for delays and low ridership as it runs amid traffic on surface streets.

The sunny side of the public mood is the renewed agitation from such groups as BeltLine Rail Now for what is currently a partially built trail system to start getting the light-rail transit that is supposed to be its core feature. 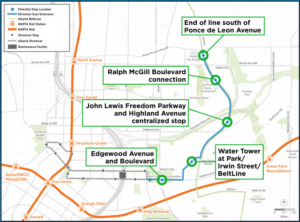 A map showing the proposed route and stop locations for the Atlanta Streetcar’s extension onto the Atlanta BeltLine. (MARTA)

With that momentum — and money flowing in part from the “More MARTA” special sales tax — “we can’t hold the excitement in” about completing the so-called Streetcar East Extension, said project manager Bryan Hobbs in the meeting. And, he said, the transit agency believes it has fixes for some of the current service problems — with tech like traffic-signal prioritization — and that ridership will be boosted by having the booming BeltLine as a destination.

The streetcar debuted at the very end of 2014, running a roughly 3-mile loop between the tourist hot spots of Centennial Olympic Park and the Martin Luther King Jr. Historic District on Auburn Avenue. Talk of quickly connecting the streetcar to the BeltLine stalled, with the last public meeting on a possible route having been held over four years ago, MARTA officials said. MARTA took over the streetcar service from the City in 2018 and is now planning the extension with input from engineers at Atlanta BeltLine Inc., the organization building and operating the 22-mile trail, transit and park loop around the city.

MARTA’s proposed route, or alignment, would keep the current loop, but extend the line with on-street tracks on Edgewood to Randolph Street, then take Auburn and Irwin Street to access the BeltLine. Alongside the existing BeltLine trail, the route would run north to the area of Ponce City Market. That’s essentially the same route presented to the public back in 2016. 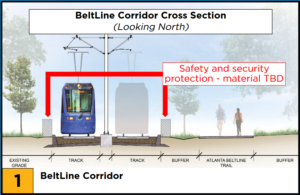 A general illustration of what the streetcar might look like running on the BeltLine alongside the existing trail, shown at right. Some type of safety fence, wall or other objects to be determined would keep the track and trail separated. (MARTA)

MARTA considered but rejected an alternative route, said transit agency executive Catherine Owens. The existing streetcar loop runs east on Edgewood, then takes Jackson Street north to Auburn, where it heads back west. MARTA looked at extending that one-way loop farther down Edgewood and Auburn, which would run the streetcar directly in front of the Martin Luther King Jr. National Historic Park center and Ebenezer Baptist Church. That was rejected in part due to concerns from the King family, the church and the historic district about traffic and construction impacts, Owens said.

There are other impacts for everyone to consider. Putting the light-rail vehicles on the BeltLine should require little or no reworking of the existing trail, Owens said, as the concept was part of the design all along. But, she added, some of type of barriers — maybe big, maybe small, maybe both — would need to be added to avoid pedestrians and cyclists from being hit by “literally a 90-ton vehicle going down the corridor.” Her description of more “controlled access” than the current freewheeling ability to walk onto the BeltLine from virtually anyplace drew questions from meeting attendees.

“It’s not reduction in access. It’s just more controlled access,” Owens said, adding that “we’re not talking about gates. We’re talking about maybe there’s a small fence that is deterring you from crossing into the trackwork. But you still have these same public street access points.” 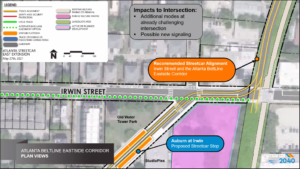 An illustrated map showing how the streetcar would access the BeltLine at Irwin Street and Auburn Avenue. The relatively complex movements raise safety concerns that planners are looking at various ways to deal with — possibly including closing part of the street to private vehicles. (MARTA)

Then there are possible traffic and parking changes. One big idea planners are considering — and soliciting feedback on — is closing Irwin Street between Sampson and Krog streets to private vehicles. That’s under consideration because the streetcar’s transition there between the BeltLine and the surface street presents plenty of potential vehicle conflicts.

Another big idea is how to handle room for bicyclists and pedestrians on Edgewood between Jackson and Randolph, where the extension would run in both directions. One alternative involves eliminating on-street parking and using the space for dedicated cycle tracks.

The extended route would mean more streetcar vehicles to store and maintain. MARTA officials said an existing streetcar maintenance facility tucked under the Downtown Connector at Auburn and Fort Street should be able to handle them without major expansion, though with an addition of another set of tracks.

So when might riders be cruising between Ponce City Market and Church? MARTA says it’s in a preliminary design phase running to June 2022. Work on a final design is expected to follow in 2022 to 2024. Then a three-year construction period would begin, with the streetcar extension opening in 2027.

Public input on the current phase can come in several ways. Two more public meetings are planned — one in September and one in February. A project website with basic maps and other information is available at tinyurl.com/StreetcarEast. The website includes a survey about this phase, which will remain open through June 30. And a recording of the recent meeting and answers to more questions from it will be added by June 4, officials said.

And the public can comment or ask questions anytime by emailing streetcareast@itsmarta.com.