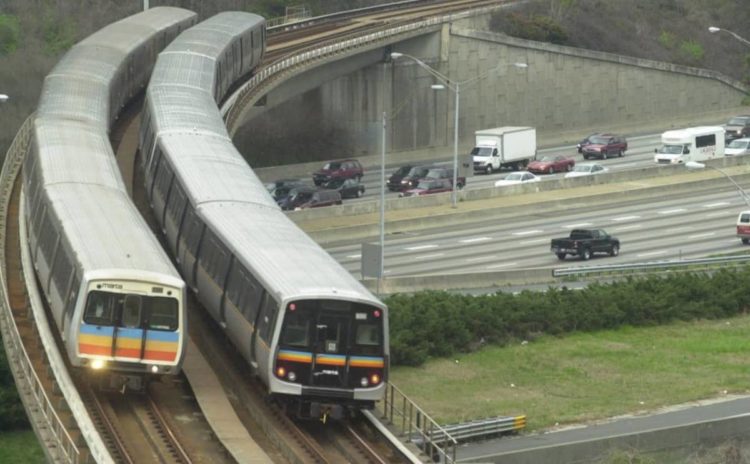 MARTA intends to use a portion of the additional sales tax to make high-capacity rail improvements and build infill rail stations. File/Credit: blogs.cresa.com

MARTA intends to replace all of its train cars by 2026 and has asked vendors to provide information on both new cars and the best way to extend the life of the existing fleet until the new vehicles arrive, according to bid solicitations that are due Aug. 30. 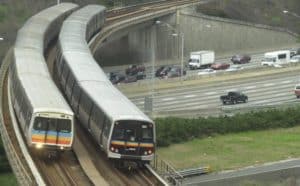 MARTA intends to replace its fleet of train cars by 2026 and is seeking advice from the industry on current practices. Credit: blogs.cresa.com

MARTA envisions the new cars serving as streetcars and able to travel freight rails – the later of which could be required for an expansion of rail service in Clayton County.

Regarding usage as streetcars, MARTA wants information on vehicles that can be powered by both a third rail that’s mounted in the track, as the cars now receive electricity to run their motors, and from an overhead pantograph – the charged wire that’s been laced over some downtown streets to power the Atlanta Streetcar.

To reduce the cost of new vehicles, MARTA is not enforcing the federal Buy America Requirements regarding steel, iron, and manufactured parts. MARTA can do that because it doesn’t intend to use federal funding to purchase the cars, according to the solicitation. That said, the solicitation observes:

MARTA has issued requests for information from vendors. One RFI is for new train cars. One RFI is for fleet maintenance. MARTA intends to use the information to write requests for proposals that are to be released in December. Bid solicitations show the RFP for new rail cars is due to MARTA around April 2017 and a contract is to be awarded around November 2017. For the car extension program, MARTA expects to award a contract in 2017. 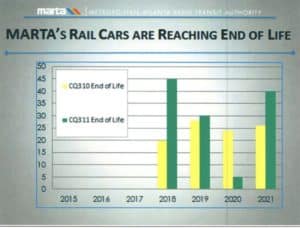 MARTA’s fleet of rail vehicles is to reach the end of its life expectancy in 2021. The yellow and green bars refer to the two generations of MARTA’s fleet. Credit: MARTA

MARTA’s trains are old. They’re to reach their lifespan in 2021. Each vehicle received a mid-life overhaul at some point between 2005 and 2008, a solicitation shows.

MARTA has two generations of train cars. The first generation, of 96 vehicles, is 36 years old. The second group, of 120 cars, is 31 years old.

MARTA intends to wring at least 30 years of life expectancy from its new cars, according to the solicitation. MARTA asks the carbuilding community to help it avoid buying cars that are going to become obsolete in short order: