MARTA’s Campbellton Road expansion plan is expected to change the nature of the roadway from the Oakland City Station to I-285, a distance of about 5.7 miles. The plan for how that is to happen is to be completed within nine months. 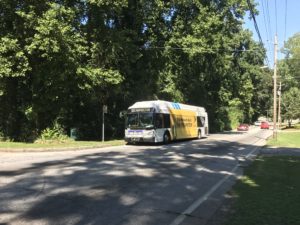 MARTA planners are imploring the public to provide their opinions. Each of the 11 slides in a virtual project update ends with the same request on an interactive tab: Give Us Feedback.

The next major deadline is early 2021. By that time, MARTA planners expect to have a recommendation to MARTA’s Board of Directors about the concept for which MARTA intends to seek federal funding. The concept will identify issues including the route of transit; where in the roadway vehicles would run – and with that the determination over purchase and possible condemnation of private property; type of vehicle, such as bus or trolley; anticipated travel times of vehicles; and detailed cost projections.

To reach the phase of a concept plan, transit planners are starting with the purpose and need for the Campbellton Road Transit Project. The needs and situations identified by planners include: 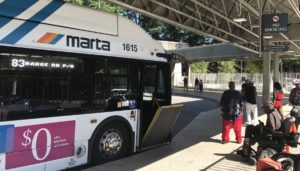 Senior citizens represent 15 percent of residents in the Campbellton Road area. Some use MARTA, such as this man boarding a “kneeling bus” at the Oakland City Station. Credit: David Pendered (2017)

The question over where in the roadway vehicles should run is now a focus of study. MARTA planners have identified four types of systems that they think are appropriate for the corridor. Two types would run in the center of the roadway. Two types would run along the curb. This is a set of highlights from the detailed information available on the page of the virtual project update with a tab in the center of the page: Click here to view details on tier 1 alternatives: 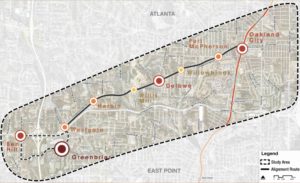 MARTA envisions four types of transit stations to serve the Campbellton Road corridor. Station size would depend on the expected development in the area. Credit: campbellton.scoutfeedback.com

The nine proposed stations would be designed to serve four distinct purposes. The purposes are based on the existing area, and the area as it is to expected to be developed once the transit enhancements are installed. Here are the four stations, definitions, and their neighborhoods:

Community Activity Center – A mixed use area, somewhat like that at the Lindbergh Station:

Note to readers: MARTA is accepting comments for the Campbellton Road Transit Project at publichearinginfo@itsmarta.com, and provides contacts for multiple digital platforms on the last page of the virtual project update.