MARTA officials today are slated to open bids for land MARTA intends to sell near the Arts Center Station in Midtown, and an additional property in Stone Mountain. 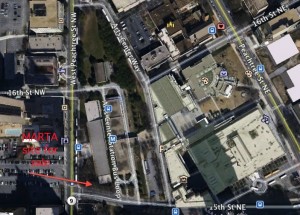 The minimum prices set by MARTA indicate that a sliver of land in Midtown is significantly more valuable than a parcel in Stone Mountain.

The Midtown site is barely more than a tenth the size of the one in Stone Mountain. The minimum price for this tract is set at about 75 percent of the Stone Mountain parcel, according to bid documents.

MARTA’s bid opening also will indicate the market’s appetite for development sites like these. Only one company has submitted a question about the deals, and it’s a broker that asked about commissions.

These two pieces of property are not part of MARTA’s effort to promote development around its rail stations. The planned sales are straight disposals of properties.

Minimum prices are set at $160,000 for the Stone Mountain site, and $121,500 for the Midtown site, according to MARTA’s bid documents. The bid opening is set for 3 p.m., a delay of an hour from the originally scheduled 2 p.m. opening. 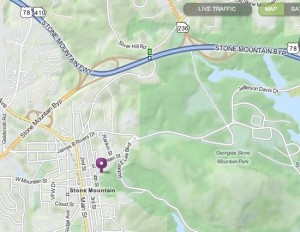 MARTA intends to sell a parking lot located at the flag on this map. Credit: mapquest.com

The Midtown site MARTA is selling is located immediately south of the Arts Center Station, on the same tract of land that houses the station. The site encompasses 1,282 square feet. An acre measures 43,560 square feet.

The property description in the bid documents describe the site as being located along 15th street, facing about 70 feet of West Peachtree Street.

There are no improvements on the parcel, according to the bid documents. The site does have easements, including an access easement in favor of the property located on the north side.

The site is zoned under Atlanta’s Special Public Interest-16 classification. This SPI aims to ensure that future development in Midtown promotes the density and texture of the existing neighborhood.

The Stone Mountain site covers 2.54 acres and is located at 978 Fifth Street, in the Stone Mountain Village. The site is between Stone Mountain Park and the village, which is a collection of shops that operate in a town center that in 2001 was placed on the National Register of Historic Places, according to exploregeorgia.org.

DeKalb County tax records indicate MARTA purchased the property in 1972 and that the site remains vacant. MARTA’s bid document shows the property is improved as an asphalt-covered parking lot.

The property is zoned for residential and Village Center Mixed Use.