Editor’s note: This story was updated Thursday night with the 40 percent service reductions discussed Thursday by the CEO of New York City’s MTA.

MARTA’s planned service expansion in Downtown Atlanta and, possibly, into Gwinnett County comes as MARTA’s finances have received positive credit reviews and a budget that could afford to stretch federal pandemic-related funds into future years. 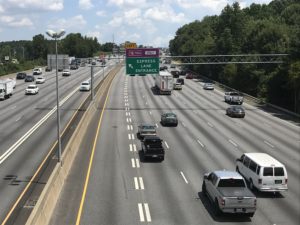 These new horizons arise as MARTA appears to stand on solid financial footing, at least in the context of the global recession triggered by the response to COVID-19.

This was at the start of the COVID-19 economic collapse, before MARTA’s revenue outlook diminished as the two main sources of revenue have decreased – passenger fares and sales tax revenues. Nonetheless, MARTA’s board was able to adopt a $1.2 billlion budget in June that did not entail layoffs or fare hikes, according to a statement.

In contrast, the head of the MTA in New York said Thursday service cutbacks of 40 percent are in the future if Congress doesn’t provide $12 billion in pandemic relief funding. The MTA announced the cuts Wednesday and MTA CEO Patrick J. Foye described them in a transcript of an interview on WCBS Newsradio 880:

Moody’s released its report on MARTA at the start of the COVID-19 economic collapse, before MARTA’s revenue outlook diminished as the two main sources of revenue have decreased – passenger fares and sales tax revenues. Transit systems across the nation experienced similar collapses and shared in relief funding. The current request is for $32 billion in transit funding, submitted by the American Public Transportation Assoc.

Nonetheless, MARTA entered the downturn with ample reserves, Moody’s analysts observed of two key indicators of any business enterprise, as well as the impact of sales taxes collected in Clayton County since voters agreed to fund MARTA:

The budget approved in June by MARTA’s board of directors provides another view of the agency’s financial position – the use of federal funds Congress provided to the nation’s transit agencies.

MARTA reported an allocation of $298.6 million in funding from the federal CARES Act. The board reported it anticipates using that money for three years, and possibly longer. This is the breakdown in use of funds: