MARTA’s seven-year project to replace about 35 miles of heavy-rail lines is responsible for the inconveniences affecting passengers this week on the East-West, or Blue-Green, rail lines. 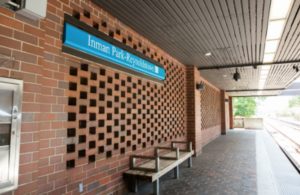 MARTA is in the process of a seven-year project to restore rail line, and work is underway near the Inman Park/Reynoldstown Station. File/Credit: itsmarta.com

Almost unnoted in the renovation project is the fact that it is underway. This is a notable feat in light of the not-too-distant past.

Less than a decade ago, the voter rejection of a proposed 1 percent sales tax for transit and transportation was widely viewed as a potential death knell for the region’s only heavy rail transit system. A portion of sales tax revenues was earmarked to maintain MARTA’s trains, buses and infrastructure.

Today, the grumbling focuses on the challenge of using the stations at the Inman Park/Reynoldstown, and Edgewood/Candler Park. Work to manage aged track started Monday and is to be complete March 16. Construction will not be halted during the travel period before and after the Saturday game of the Atlanta United soccer game.

Customer service and experience was top-of-mind in a statement issued by MARTA’s general manager and president, Jeff Parker:

This type of maintenance is called “State of Good Repair,” in the language of a federal funding formula that helps pay for routine maintenance. This is the fourth phase of rail restoration in MARTA’s 40-years of operational history.

The classification covers everthing from track to signal systems, bridges to tunnels, vehicles to stations, according to a report by the Federal Transit Administration.

Federal funds are paying $6.2 million of the MARTA project. This amount represents about 4.6 percent of the total cost.

The remaining sum is coming from MARTA’s budget for local capital projects in the amount of $127.4 million, according to information MARTA compiled at the request of SaportaReport.com.

The scope of work represents a “gee whiz” list of engineering and construction projects that are to be addressed over the course of the restoration project. Highlights of the list include: