A recent study shows housing in metro Atlanta is much cheaper to buy than rent, just as a new report suggests the national housing market may be poised for an upswing.

Here’s the breakdown on rent vs. buy as provided in a Dec. 9 report from zillow.com regarding metro Atlanta:

The working theory among some economists is that renters will become buyers when they recognize the cost savings and other benefits associated with home ownership.

These trends resonate across the broader economy because of the tremendous role of residential construction. Past recessions have ended as residential development created jobs that range across sectors including design and construction, home décor and provisions, landscaping, and government services.

However, the working theory does not seem to encompass other factors that may prevent renters from buying a home. The range of factors includes access to a mortgage; student debt; other forms of debt; job uncertainty; and appetite for buying a home so soon after the collapse of housing prices.

This is where the Jan. 29 report from the Commerce Department comes into play.

The Commerce Department released estimates that show home ownership is at its lowest level since the third quarter of 1994.

The estimates show that 63.9 percent of households in the U.S. owned their own home in the fourth quarter of 2014. A year earlier, the proportion of owners stood at 65.1 percent.

There is a silver lining that impacts the interpretation of home ownership.

The Commerce Department’s report also shows the nation has 1.66 million new households, compared to a year earlier. This figure suggests that individuals are moving out of their parents’ homes, or other shared living space, to create their own household.

The working theory is that these newly formed households will want to move from high-cost rental housing to lower-cost homeownership. They will need a place to live regardless of whether they buy or rent their home. This pent-up demand is expected to translate to new residential construction. 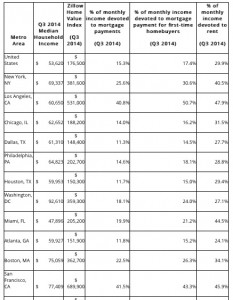 In metro Atlanta, a mortgage is less expensive than rent, according to a report from Zillow. Credit: zillow.com

Stan Humphries, Zillow’s chief economist, addressed the conundrum facing the housing industry in a statement released with the report. Humphries’ comments are in a vein similar to those cited by residential developers in the Federal Reserve’s Beige Book from the Atlanta District that was released in January.

The Beige Book for the Atlanta District included this passage: