Consumers could face higher electricity costs than expected if construction delays forecast by an independent monitor prove to be correct, according to a credit rating issued Monday. Credit: ©2021 Georgia Power Co. All rights reserved. May 2021 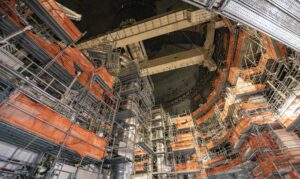 Inspectors with the Nuclear Regulatory Commission are looking into causes for remediation work done on guideways used to route electrical wires in Unit 3. This is the interior of the containment area of Unit 4. ©2021 Georgia Power Co. All rights reserved. May 2021

Moody’s’ analysts issued this observation as Georgia Power is starting the five-month process of justifying to state utility regulators its just-submitted rate hike request. The Georgia Public Service Commission has stated it will issue a ruling on the request on Nov. 2. The power company seeks an additional $235 million a year from ratepayers.

Also Monday, the Nuclear Regulatory Commission announced it has opened a “special investigation” into what led to the need to remediate raceways that route electrical cable in Unit 3, the first of two nuclear units that are to open. There’s no safety risk to the public because no nuclear fuel is in the reactor, according to NRC’s statement.

The trigger for the credit rating action was the planned sale in July of a total of $260 million in bonds for the Vogtle project by the Municipal Electrical Authority of Georgia. The money is to help pay costs related to construction, to pay off some existing debt and accrued interest, and cover other costs. The actual dollar figure could change by the date of issue, according to the rating.

The credit rating cites the construction delays forecast in a June 7 report from an independent monitor. The delays could add costs and defer revenues, setting the scene for potential borrowing with costs that would be passed to consumers. The rating action notes that the project has some reserve funds, though not enough to cover the extended delay forecast by the monitor. The use of these reserves would have the effect of:

The credit rating action issued Monday shows analysts view Plant Vogtle favorably for investors. The bonds are rated as moderate to low credit risk, meaning investors can expect to be repaid, with a profit.

Analysts expect the owners, investors and the Georgia Public Service Commission will see Plant Vogtle through to completion and for the facility to generate revenue. That’s the bet behind the favorable credit ratings. 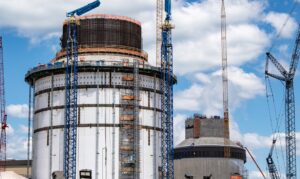 The placement of a 720,000-pound water storage tank atop Plant Vogtle Unit 4’s containment vessel is the last major crane lift at the project site, according to Georgia Power. Credit: ©2021 Georgia Power Co. All rights reserved

Analysts said as much when they identified in each rating action “Factors that could lead to a downgrade in the rating:”

Coming back to consumers, the prospect of higher electrical rates is cited in the credit ratings as the result of potential construction delays forecast in a June 7 report by an independent construction monitor who’s tracking the project.

The monitor noted that Plant Vogtle’s two nuclear plants are not likely to come online until mid 2022 and mid 2023, at the earliest. That’s a delay of at least six months from the timeline presented by Georgia Power in a February report.

The written testimony was presented by Donald Grace, an industry veteran with more than 50 years experience in energy-generating fossil and nuclear facilities. The PSC hired Grace in 2018 to independently evaluate the construction process.

The delays Grace predicted result from “poor productivity and production” in the construction processed, according to his report.

Moody’s’ analysts considered Grace’s report and other information to estimate that such a delay could add $2 billion to construction costs. The sum could be needed to cover additional construction costs, compelling the owners to seek more money to pay the extra costs and cover other financing needs, analysts reported.

Meantime, a few outliers could help reduce the amount of borrowing and the resulting costs to consumers. One is the reserve fund. Another is the lower interest rates for current borrowing. The interest rate is 3.57% instead of the projected 5.91% rate initially projected, according to a calculation of numbers in the report.

The credit rating action does not address how the rate hike would be implemented.