Norfolk Southern appears to be in a solid negotiating position as advocates of Clayton County’s potential transit system prepare to ask the company to allow MARTA to operate passenger trains on Norfolk Southern’s freight tracks. 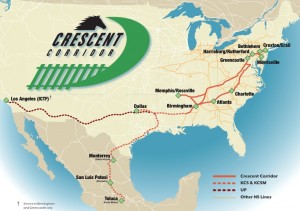 Norfolk Southern is developing a $2.5 billion project to improve its freight system along a route that passes through metro Atlanta and could affect MARTA’s plans to put passenger trains on Norfolk Southern tracks in Clayton County. For a larger version, click on the image. Credit: Norfolk Southern

A MARTA study shows that $185 million could be saved if Norfolk Southern allows use of its freight line for passenger rail service. Norfolk Southern has sent a letter to MARTA that raised a red flag over the notion that passenger service could begin in seven years at the price contemplated in the MARTA study.

The issue will come to a head if Clayton County voters approve in November a 1 percent transit tax. Clayton’s Board of Commissioners voted Saturday to place the referendum on the ballot. A feasibility study conducted by MARTA shows rail passenger service to Lovejoy could begin in 2021.

Norfolk Southern has made clear for years the value it places on its freight lines in metro Atlanta. The company reiterated its position in a two-page letter dated June 24 and sent MARTA CEO Rich Krisak.

In February, in an annual filing with the Securities and Exchange Commission, Norfolk Southern reported that the Clayton County corridor is part of the sixth busiest route in Norfolk Southern’s national system.

This corridor links Chicago with Macon. It was listed second to only the New York/Chicago route in the company’s annual 10-K filing with the SEC. The report also illustrated why Norfolk Southern is one of the largest transport companies in the nation. 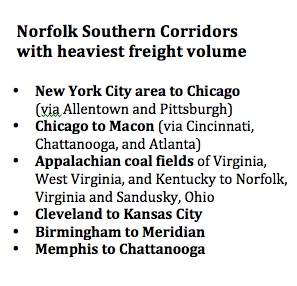 Norfolk Southern provided this list of its busiest freight corridors in a report to the federal Securities and Exchange Commission. Credit: sec.gov

In addition to the importance of the Clayton County corridor, metro Atlanta is an integral part of the company’s growth strategy.

Norfolk Southern is building a $2.5 billion project to improve the freight system along a 2,500-mile stretch that spans 11 states, and passes through Atlanta. The Obama administration is backing this project with money from the TIGER Stimulus Program, the same funding source that’s helping to pay for construction of the Atlanta Streetcar.

According to the Norfolk Southern website, the expanded Crescent Corridor intends to provide, “one of the fastest, most direct routes from the southeast to the northeast, with convenient connections to Mexico and Los Angeles.”

The project already includes $309 million in public financing, and $315 million in private financing from Norfolk Southern, according to the company’s 10-K statement filed Feb. 14 with the SEC for the fiscal year ending Dec. 31, 2013.

Norfolk Southern’s value has more than doubled in the past five years, from $13.65 billion to $32.15 billion on July 3, according to ychart.com.

Incidentally, Tom Bell is a director of Norfolk Southern’s board and chairs the board’s Finance Committee. Bell now chairs Mesa Capital Partners LLC, and he’s a former chair/CEO of Cousins Properties and Young and Rubicam Inc., and a former chair of the Metro Atlanta Chamber.