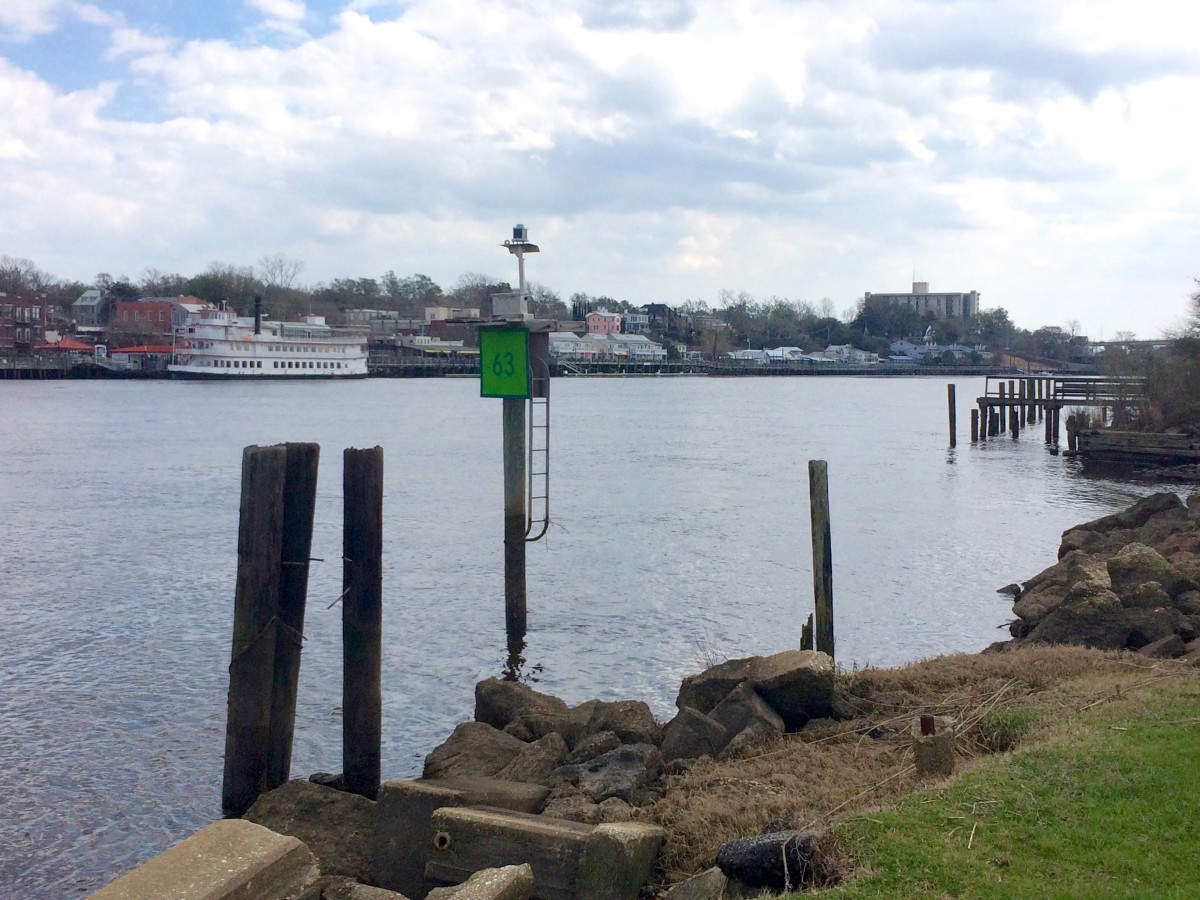 Editor’s Note: This is the first of two stories that examine economic development efforts in coastal North Carolina. Coming Wednesday: Bridges to the future.

WILMINGTON, N.C. – North Carolina is expanding its seaports and bridges in a comprehensive effort to promote economic development in shipping and tourism along its remote coastal communities.

North Carolina’s coast is even more isolated than Georgia’s. 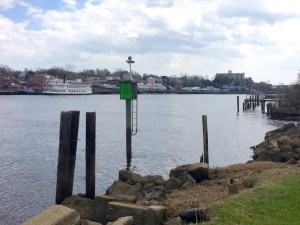 Downtown Wilmington overlooks the Cape Fear River about a mile north of the Port of Wilmington, which is being developed to spur economic growth. Credit: David Pendered

Whereas I-95 passes fairly close to Georgia’s coast, North Carolina’s seaside towns are linked by a series of ferries, bridges, and highways that serve as local arterials, similar to Peachtree Road (aka U.S. 19). In North Carolina, I-95 is 50 to 100 miles inland.

In Wilmington, the state has three construction programs intended to serve the bigger ships that will transport freight once the expanded Panama Canal is opened later this year.

In Morehead City, the state’s other seaport, North Carolina is expanding what it calls its “white glove service” – the ability to handle unusual products such as huge bridge girders and wind turbines. Major construction isn’t planned in the near future.

“We want to further our current customer base,” said Cliff Pyron, communications manager at the N.C. State Ports Authority.

“Our CEO says we want to reclaim the market of North Carolina,” Pyron said. “Ports around us [in Virginia, South Carolina and Georgia] move significant products from North Carolina. We’re hoping our expansion will give us a better ability to serve our customers’ needs.” 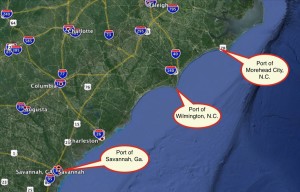 The state of North Carolina is expanding its ports to spur economic development along the coast and recapture cargo that now ships through Savannah and Charleston, S.C. Credit: Google Earth, David Pendered

The North Carolina Legislature provided a total of $70 million in construction funding over the course of two fiscal years. The ports authority is adding an additional $30 million, bringing the total investment to $100 million.

The biggest project will widen the channel in the Cape Fear River to enlarge the turning basin. The bigger ships that are expected to use the enlarged Panama Canal need more space than is now available to complete a three-point turn in order to depart the port.

The dredging operation is to widen the turning basin from 1,200 feet to 1,400 feet, with a navigable depth of 42 feet. Permits are in place and construction is in initial phases, Pyron said. The $22 million project is to be complete by June 30, he said.

Two other construction programs at Wilmington aim to attract more homegrown business. Both are public-private investments.

A cold storage facility is to open this summer. It will enable the blast freezing of products before they are loaded onto ships for transport to other countries. The facility also will serve as a seafood processing facility.

Brooklyn-based Acme Smoked Fish Corp. expects to bring in supplies, including salmon harvested in Chile, process the product, and export it to other countries.

The port also hopes to attract a fruit and vegetable maker to use the facility. Pyron said.

On the export side, Pyron said port officials hope the freezer will attract more clients who handle products produced in North Carolina, including pork, poultry and sweet potatoes.

The other project is a marine terminal and two storage domes to handle wood pellets. Enviva Partners LP is the private partner.

Enviva produces a total of 2.2 million metric tons of wood pellets a year and exports them mainly to power plants in the United Kingdom and Europe, according to a page on the company’s website. Enviva has facilities in Mississippi, Florida, Virginia, Alabama and North Carolina.

In Morehead City, the state has undefined plans to develop land it owns on Radio Island, across its turning basin from the main cargo port. Meanwhile, the port is growing it “white glove” business.

Morehead City handling massive girders that are manufactured and painted in Greensboro, N.C. and transported to Morehead City. They are loaded onto barges and hauled to New York for use in the new Tappan Zee bridge project, Pyron said.