Northside Drive in Buckhead is to reopen on Dec. 7, ending a total closure of the road for the past three months in a part of the city where travel has been impeded since 2017. 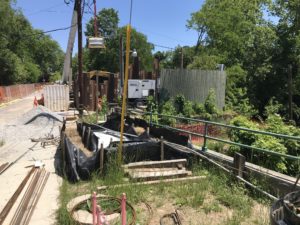 Atlanta is replacing a pump station with a larger unit that will handle more sewage and replace a former gravity feed that was made obsolete by new bridges at Northside Drive. Credit: David Pendered (May 2020)

Northside Drive is a major North-South roadway along the west side of Buckhead. It runs between I-75 and Peachtree Road through this portion of the city, serving local commuters as well as those traveling between Cobb County and Buckhead, Midtown and Downtown.

The impediments to travel have included a repaving project on Northside Drive; replacement of utility poles on the shoulder of Northside Drive; and construction at Piedmont Hospital of the Marcus Heart and Vascular Center, where construction started in January 2017 at the corner of Peachtree and Collier roads.

Contractors with the Georgia Department of Transportation closed Northside Drive on Sept. 8 to allow workers to work around the clock to replace two bridges at the intersection of Northside Drive and the triangle created by Woodward Way and Sagamore Way. GDOT offered this hope to commuters in a statement released Oct. 29: 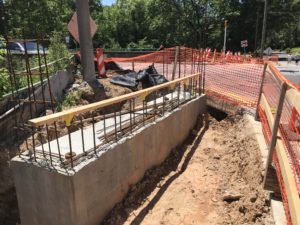 Northside Drive is to reopen to travel on Dec. 7 in a move that also will end the rerouting of traffic through Buckhead neighborhoods. Credit: David Pendered (May 2020)

This project is expected to conclude work on and alongside the road that for years had slowed the normal flow of travel.

The most recent closure came as the major work was winding down around Piedmont Hospital, where construction of the tower had been hampered through the intersection of Peachtree and Collier road.

Piedmont opened some space in the tower in April, to serve patients during the shortage of hospital beds at an inflection point of the pandemic. The tower was opened on a fulltime basis on July 15, according to a statement.

Construction activities at the tower are not complete. Work is to continue into 2026, as the interior work is built out, according to Piedmont’s statement.

Nor is the work along Northside Drive complete. But what’s left to be done is to have little impact on travelers, according to GDOT’s statement:

Atlanta portrays the work at the pump station as two-fold: To build a bigger pump to handle more sewage; and to pump sewage that flowed by gravity before the bridge was elevated. The full project overview in a statement released by the city’s Department of Watershed observes: