Georgia’s foray into the next generation of road-building projects is proving so successful that the analysts have raised the credit rating on bonds that helped pay for it. Strong revenues result in fewer concerns about Georgia’s ability to repay a federal loan that helped fund the tollway in Cobb and Cherokee counties. 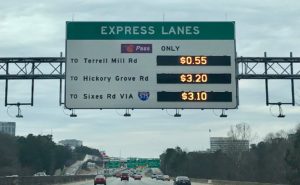 Commuter demand for the speed offered by the Northwest Corridor tollway is expected to increase as traffic congestion rises in Cobb and Cherokee counties. Traffic was lighter than usual March 13 amid concerns over the coronavirus. Credit: David Pendered

In addition, toll collections on the Northwest Corridor Express Lanes Project are forecast to continue to exceed initial expectations because traffic congestion in the corridor is expected to continue mounting, according to the rating action by Moody’s Investors Service. Rising traffic congestion is expected to convince more drivers to pay a toll to shorten their commute times along portions of I-75 and I-575.

The higher credit rating appears to affirm the decision made during the administration of then Gov. Nathan Deal to move into a design-build-finance way of building highways. The approach intends to improve mobility by partnering with private industry to deliver new roadways and is at the heart of the nearly $1 billion retrofit of the intersection of Ga. 400 and I-285, now underway.

This approach intends to respond to the relative decline in federal funding for both highways and transit. The state’s Major Mobility Investment Program – now underway across metro Atlanta – is related to this approach to road construction. The toll lanes envisioned in the MMIP are to accommodate public transit, such as buses operated by MARTA and GRTA, the Georgia Regional Transportation Authority.

For the Northwest Corridor project, in Cobb and Cherokee counties, the higher credit rating represents a one-notch improvement within a category that’s defined as medium-grade investments. Moody’s raised the rating to Baa2 from Baa3 and left their future as stable.

While the upgrade may seem small, it is a positive sign for current and potential investors in the Northwest Corridor project. The upgrade signals that revenue projections made during planning are being realized.

As stated in the March 3 rating action: 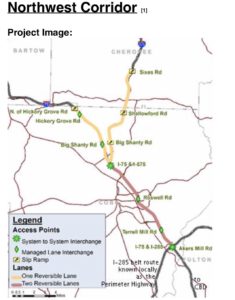 The Northwest Corridor project extends along 29.7 miles of I-75 and I-575, in Cobb and Cherokee counties. Credit: U.S. Department of Transportation

One bit of bad news for commuters – ongoing congestion – is represented as a positive for investors in the toll lane project:

Moody’s analysts reported in April 2019 that the toll system opened in September 2018 and was delivered essentially on time and within its budget of $835 million.

According to a report by U.S. Department of Transportation, funding sources for the project include the following, including federal funds from the Transportation Infrastructure Finance and Improvement Act, which is the pot of money affected by the upgrade issued by Moody’s:

Previous Article
Why save it? Just pave it – Conservation becoming tool of choice in Morgan County
Next Article
Okefenokee Swamp: Valuable sands prompt new attempt to mine along Trail Ridge