It was this week, in 1972, that Georgia elected its first Black congressman of the 20th Century, Atlanta’s Andrew Young.

And this week in 2002, Georgia elected its first Republican governor since Reconstruction, Sonny Perdue. He’d been a Republican for about four years.

But back in the 20th century, most Georgia politicians were Democrats, even the conservatives.

In the meantime, on to other news in metro Atlanta:

The issue of Stone Mountain as an official Confederate Memorial is “coming like a freight train,” Sheffield Hale told members of the Rotary Club of Atlanta on Nov. 2. 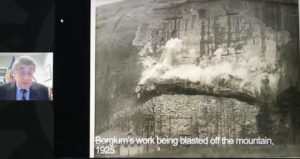 Sheffield Hale speaking to the Rotary Club of Atlanta via Zoom Nov. 2.

Hale is president and CEO of the Atlanta History Center, and he urged the business and civic community to face the issue head as they did when the state’s flag was changed to remove the Confederate Battle symbol.

“We now need to have the same collective will to address the issue of Stone Mountain,” said Hale, who added the carving of Confederate leaders was resumed in the 1950s in reaction to the Supreme Court’s ruling on Brown versus Board of Education, which ruled that the racial segregation of children in public schools was unconstitutional.

“It is not an ancient monument,” Hale said. “The carving was not completed until 1973.”

Hale, however, stopped short of calling for the removal of the carving, but he did not rule it out.

“I don’t like to take anything off the table,” he said. “It’s been blown up before, but I wouldn’t lead with that.”

“It’s not about the carving; it’s about the law that designates this as Confederate Memorial,” Hale said. “First, change the law and make it into a state park. It is not being used as a Confederate Memorial. It’s one of the most diverse places in Georgia. It’s like the United Nations over there.”

Hale said the time to remove its designation as a Confederate Memorial is now given that the park’s vendor – Silver Dollar City – is pulling out in the next couple of years.

“It’s a really good time because the state will have to take it over,” Hale said. “The state needs to recognize it’s a problem.”

Hale urged Georgia to get ahead of the issue, which he believes could become a reason for an economic boycott of Stone Mountain and Georgia because of its Confederate designation.

Cobb and Gwinnett look to women, Democrats for local office

At least one thing the pundits said was correct: vote-counting would take a while.

But scrolling down metro Atlanta ballots, some things are looking clear.

Cobb County is probably going to have an all-female county commission. It depends on Jerica Richardson’s holding onto a 50.6% vote share for the east Cobb District 2 commission seat.

But the old stomping grounds of Newt Gingrich are a-changin. Cobb clearly rejected Republicans for county office. Instead, Cobb chose Democrats Lisa Cupid for commission chair, Craig Owens for sheriff and Flynn D. Broady in a special election for the circuit’s district attorney.

Ditto for Gwinnett. Voters there chose Democrats for the same three county offices.

But Gwinnett is looking skeptical of a plan for a penny sales tax to fund bus and MARTA rail service to the county.  “Yes” and “no” are running too close to call.

Fingers on the pulse of COVID-19

Georgia’s average number of new COVID-19 cases has been creeping upward since October, as counted by the Georgia Department of Public Health.

The trend is the same in Fulton County, according to a regular update given this by county public health officials and consultants.

There are still hospital beds available in Fulton, but it’s getting a little tight as seasonal flu and other patients check in, as well as COVID-19 patients.

The county has had about 3,000 or staffed hospital beds every day for about the last two weeks. It’s considered a “low warning” level when less than 15% of those beds are available; and Fulton has nudged that mark more days than not since Oct. 19.

Fulton’s share of COVID-19 cases is disproportionately low within the state of Georgia. The county has about 10% of the state’s population, but about 8.8% of its COVID-19 cases and about 7.8% of deaths. 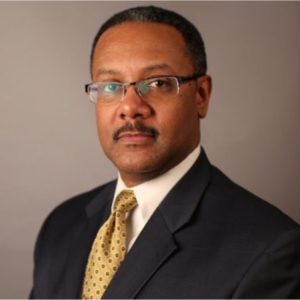 The Atlanta-based Future Foundation, which works to level the playing field for youth in metro Atlanta by providing  educational, health, and life skills programs, is getting a new interim CEO.

Fundraising executive James Tyson is taking the office. The organization serves about 1,200 youth across metro Atlanta.

Doug and Robin Shore have committed $50,000 to establish the Doug Shore Endowed Scholarship, to be awarded to KSU Journey Honors College students who are majoring or minoring in entrepreneurship.

Shore family member names are already on several other KSU gifts, including scholarships for aerospace engineering and study abroad.