Temporary artwork from Jason Kofke, part of the Drive Thru Atl exhibit at Moreland and Custer avenues in Southeast Atlanta in June, 2020. Credit: Maggie Lee

Artwork from Jason Kofke, part of the Drive Thru Atl exhibit at Moreland and Custer avenues in southeast Atlanta. Credit: Maggie Lee

Americans’ temporarily generous unemployment benefits are set to expire Friday without a congressional renewal. The extra $600 dollars a week started in March as a response to COVID-19.  Some members of Congress talked about renewing it at $100 or $200 a week or more; but as the clock ticks, a deal becomes less and less likely.

Since March 21, Georgians have been paid about $10.5 billion in unemployment benefits. That’s more than 10 times more than in the previous three years combined, according to the Georgia Department of Labor.

Atlanta Chamber in search of people who can run computers

The Metro Atlanta Chamber of Commerce is looking to nudge “tech-savvy” folks into becoming poll workers. 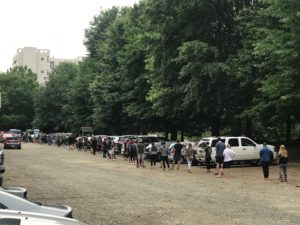 In a time of pandemic, MAC’s program aims to attract younger people to fill a void left by older workers with underlying conditions who may not volunteer as poll workers this election season. The average age of Georgia poll workers is over 70. Tech-savvy candidates are “preferred,” though all eligible folks are welcome, according to a press release announcing the campaign.

“It’s no secret how important it is for all citizens in all communities to exercise their right to vote. We are each in a unique position to use our vote to shape our region’s future and affect positive change,” said chamber President and CEO Katie Kirkpatrick. “The talent within our region’s major corporations, and our small and medium-sized businesses creates the perfect opportunity to mine for highly-qualified poll workers who can make a meaningful impact on election day.”

The last Election Day was also of course kind of an embarrassment for Georgia in general and Fulton County in particular, as pictures of long lines at some polling places stole the story. And that itself was just one episode in a public feud between the state and mainly big counties like Fulton and DeKalb about who’s responsible for the maladministration.

Call for nominations: most excellent development

The Atlanta Regional Commission wants to award planning and development projects that improve quality of life, equity and resiliency in metro Atlanta.

So they’re seeking nominations for their annual Development of Excellence awards.

Read more about criteria and how to make nominations here.

The most recent past winners are The Kendeda Building for Innovative Sustainable Design at Georgia Tech and Station Soccer.

The foundation named for the governor whose signature policy was HOPE scholarships is aiming to make up the difference the full tuition HOPE used to pay and what it pays now.

New Shirley Miller Scholarships from the Zell Miller Foundation will fund students at Georgia’s colleges or technical schools, prioritized in this order:

At its start, HOPE was a need-based program, open only to students whose families made less than $66,000.

HOPE is now open to students from all families, no matter how rich.

But it no longer pays full tuition for students except those who finished high school with the highest grades. For everyone else, what the lottery raises is divided among all recipients. At Georgia State University, for example, HOPE pays about 86% of undergraduate tuition and fees per semester right now.

The Paula and Rodger Riney Foundation of St. Louis is making a $7.8 million gift to Winship Cancer Institute of Emory University for multiple myeloma research.

Rodger Riney, founder of the brokerage firm Scottrade Financial Services, was diagnosed with the plasma cell cancer in 2015.

The gift isn’t because Rodger Riney received treatment at Emory.  He didn’t.

“Paula and I believe the best opportunity to cure multiple myeloma is to fund important research and researchers at multiple institutions, like [Chief Medical Officer] Dr. Sagar Lonial at Winship,” said Rodger Riney, an a press release announcing the gift. “In addition, we have a commitment to generate cross institutional research with the expectation that the collaborations will accelerate our collective goal of improving outcomes for patients with multiple myeloma.”

Film Impact Georgia, a nonprofit that offers aid, education, and funding for independent filmmakers and the The Atlanta Writers’ Society, an Atlanta-based organization focused on promoting underrepresented communities and their projects, are joining up.

The idea is to provide a much needed, inclusive space to promote, support, and elevate underrepresented creative writers at all experience levels,” AWS Head of External Affairs Chaz Jenkins said, in a press release announcing the partnership.

“Atlanta Writers’ Society is launching under FIG’s umbrella to help jumpstart their program before breaking out on their own,” FIG Creative Director Molly Coffee said. ” … We just want to help arm them with the resources and access that our organization can bring to the table so they are set up for success.”

Owens most recently was the senior vice president at the Georgia Budget and Policy Institute, a policy research and advocacy organization. She succeeds HealthMPowers president and CEO Christi Kay, who announced her retirement earlier this month.

The nonprofit works via several kinds of programs and in many venues, like schools and early care centers, to make sure children have access to healthy foods and safe places to play and be active.

Former CDC Director Dr. Jeffrey Koplan, who’s now vice president for Global Health at Emory University, has been elected to a five-year term on the board of directors of the CDC foundation. 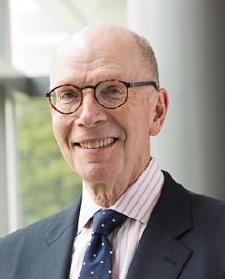 He joins along with  Dr. Amelie Ramirez, professor and chair of the Department of Population Health Sciences and director of the Institute for Health Promotion Research at UT Health San Antonio.

“These two accomplished public health experts offer unique knowledge and skills that will complement our existing board and provide additional counsel during these challenging times,” said Dr. Judith Monroe, president and chief executive officer of the CDC Foundation, in a press release announcing the additions.

Koplan is a former director and 26-year veteran of the U.S. Centers for Disease Control and Prevention (CDC). He began his public health career in the early 1970s as a member of CDC’s Epidemic Intelligence Service. He has worked on virtually every major public health issue, including infectious diseases such as smallpox and HIV/AIDS, environmental issues such as the Bhopal chemical disaster, and the health toll of tobacco and chronic diseases around the globe. From 1994 to 1998, he pursued his interest in enhancing the interactions between clinical medicine and public health by leading the Prudential Center for Health Care Research, a nationally recognized health services research organization. 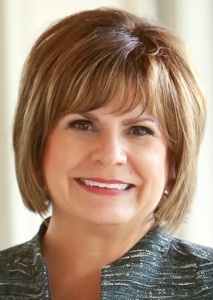 Ramirez is an internationally recognized health disparities researcher at UT Health San Antonio, where she is professor and chair of the Department of Population Health Sciences and director of the Institute for Health Promotion Research. She has 30 years of experience conducting behavioral and communications projects to reduce cancer, increase screening rates and clinical trial participation, prove the efficacy of patient navigation for cancer patients, prevent tobacco use and improve healthy lifestyles among U.S. Latinos.

The Atlanta-based CDC Foundation helps the Centers for Disease Control and Prevention (CDC) save and improve lives by unleashing the power of collaboration between CDC, philanthropies, corporations, organizations and individuals to protect the health, safety and security of America and the world.

The CDC Foundation is the go-to nonprofit authorized by Congress to mobilize philanthropic partners and private-sector resources to support CDC’s critical health protection mission. Since 1995, the CDC Foundation has launched more than 1,000 programs and raised over $900 million. The CDC Foundation managed hundreds of CDC-led programs in the United States and in more than 140 countries last year.

August 5 at 6:00 p.m.: DeKalb County Juvenile Court presents “What to do when you see Blue,” a virtual forum for young people and families about how to engage law enforcement and about civil rights and civil liberties. Free and open to the public.