The City of Atlanta has entered the “Green Zone” of its COVID-19 reopening plan, and Mayor Keisha Lance Bottoms lifted the city’s mask mandate, which has been in effect since late July. While masks are still required in all City of Atlanta facilities, private businesses and restaurants can decide if they want folks to mask up.

More news from the week:

Atlanta’s 2021 elections aren’t over yet

With Atlanta’s mayoral, City Council and Board of Education races going into runoffs, the city’s voters will need to make another trip to the ballot box.

Election Day is Tuesday, Nov. 30, but DeKalb and Fulton County voters can submit their ballot early from Nov. 17 to 24. If you plan to vote by absentee ballot, request your ballot today.

DeKalb voters can click here for more information about early voting, and Fulton residents can visit this website.

Click here to learn more from SaportaReport’s John Ruch about which seats have gone into runoffs.

You can also refresh your understanding of the candidate’s platforms by visiting SaportaReport and Atlanta Civic Circle’s 2021 Voter Resource Guide. Be on the lookout for an updated Runoff Guide, too. 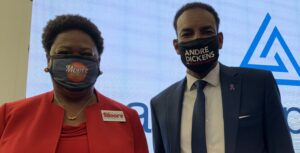 The Atlanta Press Club will host debates for the three citywide runoff election races on Nov. 16.

Part of the Loudermilk-Young Debate Series, the debates will include candidates for mayor, City Council president and the City Council Post 3 At Large seat. The debates will be available on live-stream and on-demand video, and the two City Council debates also will be shown later on Public Broadcasting Atlanta.

The following are the details of when and where to watch each debate: 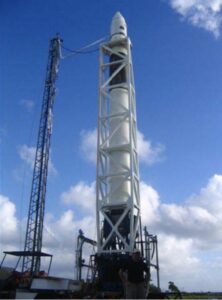 Camden County’s spaceport is to launch rockets smaller than this Falcon 9 by SpaceX, which was launched June 9 from Cape Canaveral, Fl. (Photo by NASA/Kim Shiflett via wikimedia.org)

Space history is being made 200 miles south of the planned spaceport in Camden County, which faces yet another delay in the federal review of proposed rocket launches from a planned build-from-scratch spaceport.

The record books were updated on Sept. 15, when Cape Canaveral, Fla., was the launchpad for the first-ever flight of tourists who were on their own. No trained astronauts were aboard.

This was the 21st licensed launch in 2021 from Florida’s space coast by SpaceX, according to records kept by the Federal Aviation Administration. Entrepreneur Elon Musk serves as CEO of SpaceX.

While this activity is underway in Florida, the FAA continues to mull over Camden County’s application to build a spaceport. The decision has been delayed multiple times. Camden’s latest proposal is for the spaceport to launch rockets capable of lifting small and microsatellites. The FAA now anticipates announcing a ruling on Dec. 15. 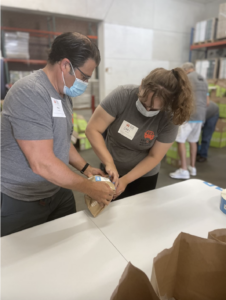 Free Thanksgiving meals to be distributed two days before holiday

On Tuesday, Nov. 23, folks facing food insecurity can collect a free Thanksgiving meal, including a turkey and side dishes.

The food is provided by HelloFresh, a meal kit company, as part of their Meals with Meaning program that offers free, healthy meal kits for low-income residents in the Atlanta area.

Through help from packing company Pratt Industries, food rescue organization Second Helpings Atlanta and Councilmember Michael Julian Bond, the program distributes 8,000 kits per week. The meals are available for anyone who shows up during the allotted distribution hours.

Visit Bond’s Facebook page closer to Thanksgiving for additional information about picking up the holiday meal. 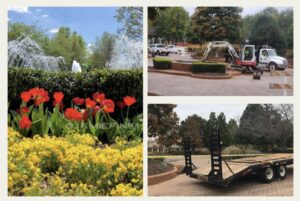 Smyrna has removed a water fountain (left) and is soon to remove the traffic circle, where the fountain was located, from its downtown area. (Photos by Jamie Fine [left]; Shaun Martin [top right] and David Pendered. Collage by David Pendered)

Smyrna has removed a decorative water fountain from its downtown area and is soon to remove the traffic circle in which it was located. The two features helped the city win a 1997 award for smart growth from the Urban Land Institute.

The Smyrna City Council voted Oct. 18 to remove the two features. Smyrna Mayor Derek Norton has characterized the new plans for the area as a continuation of the revitalization effort that began in the 1990s.

Part of the plan is the sale of an acre of city-owned land to StillFire Brewery for $600,000. The Suwanee-based brewery plans to build a three-story beer manufacturing plant with onsite sales.

Opponents of the redesign were surprised by the city’s speed in arranging for the removal of the fountain, which began soon after the vote. The traffic circle is to be removed before construction of the replacement design which will begin in Spring 2022. A poster on Smart Smyrna’s webpage wasn’t happy about the decision and wrote:

“Why was the destruction of the fountain inside the roundabout immediately implemented a few days after the City Council voted to approve the redesign? Couldn’t the destruction have happened AFTER the holiday season? Couldn’t the Mayor have allowed the citizens of Smyrna to enjoy one last traditional Lighting of the Tree and visit by Santa?” 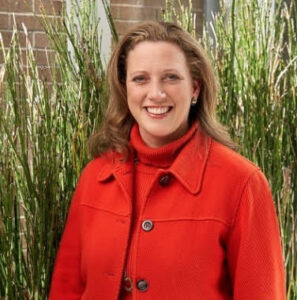 Andrea Pinabell, who has been president of Southface since Jan. 1, 2017, recently told the nonprofit’s stakeholders that she will resign, effective Nov. 15.

“After five amazing years as the Southface president, I have chosen to step down and transition towards a more strategic direction,” Pinabell wrote in an email. “I am pleased to announce that our board of directors has hired Jim Neal through the Georgia Center for Nonprofits as interim executive director of Southface.”

The organization will launch a national search for Pinabell’s successor with the assistance of Boardwalk Consulting, an Atlanta-based search firm.”

In a personal text, Pinabell said that with the passage of the federal infrastructure bill, the work of Southface “is nore important than ever.”

Pinabell said that in the past 18 months, have society has been redefining “how we work and live, how we support each other, and what it means to work toward a more equitable world.”

The same is true for Southface, which is welcoming a societal transformation so it can achieve a more sustainable and resilient future at the intersection of the natural and built environments.

“Given that Americans spend over 90 percent of our time indoors, throughout the pandemic, communities have gained a new understanding of the importance of a healthy home and workplace,” Pinabell said. “People are raising their expectations for all indoor environments to ensure the best air quality, fresh air ventilation, energy efficient systems, as well as sustainable and healthy materials.

“It is also painfully clear that Black, Indigenous, and other people of color and those in low-income communities face greater threats from both the pandemic and our rapidly warming planet, bringing home the fact that the path to recovery, resilience, and prosperity is one we must travel together, with those who are most impacted leading the way, Pinabell continued.

A low-magnitude earthquake was recorded in Lilburn, Ga., early Monday morning, according to WSB-TV.

The 2.1 magnitude earthquake wasn’t strong enough for most people to feel, but Fido might’ve picked up on the disturbance. If your dog was acting strangely that morning — now you know why.

If you’ve lived in Georgia for a while, you know this isn’t a common occurrence. The earthquakes that have shaken the Peach State, though, haven’t been a high enough magnitude to qualify for the Georgia Disaster History section of the state’s website.

A small earthquake was centered in Lilburn this morning. pic.twitter.com/0j3w70fA5H 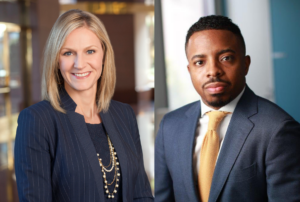 Al McRae has been selected as president of Bank of America Atlanta. Wendy Stewart, the bank’s previously president, was named as president of Global Commercial Banking and a member of the company’s senior management team.

In the new role, McRae will continue Stewart’s efforts to address social and economic concerns, strengthen communities and provide the bank’s resources to people and companies across the metro region.

“During his 17 years with us, Al has established deep relationships with teammates, clients, and the Atlanta community,” said CEO Brian Moynihan in a press release. “I thank Wendy for her leadership and for assuming new and expanded responsibilities, and I look forward to continued growth and success with Al taking on this critical role.”