As metro Atlanta is poised for a mass transit Renaissance, boosters for the sprawling, “southern crescent” sub-region known as Aerotropolis want to ensure that those who live, work, and play near the world’s busiest airport are ahead of the curve and innovating for the future.

The Aerotropolis Atlanta Community Improvement Districts (AACIDs), in partnership with their public and private sector partners, have launched a feasibility study to assess the potential of leveraging the region’s existing transit assets — and possibly creating new ones —  to keep pace with the community’s evolving mobility needs. 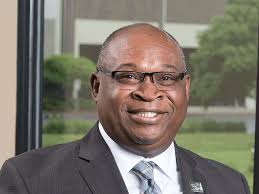 Gerald McDowell, executive director of the AACIDs, explained that the rationale for the yearlong study is twofold: First, to increase and enhance transit access for local residents, employees and employers. At the same time, they want to make Aerotropolis more attractive to travelers, conventioneers and large corporations that may be interested in relocating their operations to the region because of the area’s ideal proximity to Hartsfield-Jackson Atlanta International Airport.

Aerotropolis, which lies in both Clayton and Fulton counties, covers about 16 square miles and straddles three of the region’s major interstates: I-85, I-75, and I-285. Today, transit service to the area consists primarily of MARTA buses and its popular heavy-rail line that takes commuters directly to the airport’s main terminal for $2.50, one-way. 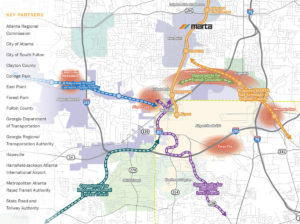 Still, there’s plenty of room for more, and better transit.

“We want to make transit connections internally, within the region and externally, beyond the region.” McDowell said. “We have to be in a position to make sure that we have the infrastructure in place for those connections to be made seamlessly.”

One of the promising scenarios being considered, McDowell said, is the possible addition of new routes for the free, ATL SkyTrain. The automated rail system currently shuttles passengers between the airport’s domestic terminal, the offsite rental car facility and the nearby Georgia International Convention Center (GICC).

The feasibility study now underway could include proposals to add SkyTrain-type service from the convention center to the busy Camp Creek Parkway corridor, to the corporate headquarters for Porsche and Delta Airlines and to a new, 320-acre, mixed-use development that will be adjacent to Hartsfield-Jackson in the City of College Park called “Airport City.”

“Everything is on the table,” McDowell said. “The theme of this transit study is creating 21st century transit infrastructure for Hartsfield-Jackson Airport.”

Grady Smith is a veteran transit planner for VHB, which is conducting the $350,000, privately funded Aerotropolis study. Smith said that a highlight of the company’s work will take place in September when Aerotropolis will be inviting transit companies from around the world to Atlanta to display their cutting-edge technologies to improve mobility.

“We will be holding an innovations summit asking vendors to bring us their ideas about how technology can help with some of these activities.” Smith said “From light-rail, to personal rapid transit to electric bikes, we want to be innovative and creative in our solutions set and we’re asking the mobility technology community to to give us some ideas.”

In addition to the September summit, Smith said his team will conduct outreach including interviews with key stakeholders, mobile exhibits, public meetings, and surveys. Those who wish to share their input for the study can complete an online survey. Recommendations from the study are expected to be announced in December.

With the overwhelming passage of the “More MARTA” referendum in the City of Atlanta in 2016 and the approval of a historic, pro-transit bill in the Legislature earlier this year, it appears that state and local leaders — and traffic-plagued commuters — are now recognizing the value of investing in buses, trains and alternative transportation modes instead of focusing solely on roads and highways.

Although  most of the new initiatives on the drawing board will be concentrated in metro Atlanta’s northern tier, the rise of  Aerotropolis could help extend the region’s transit footprint southward and become a catalyst for much-needed economic revitalization and quality-of-life improvements.

“Anytime you can make it a lot easier for people to have transportation access, it correlates to jobs and compounds the interest in the area and helps make more economic development happen,” said Shannon James Sr., executive director of the related Aerotropolis Alliance and a member of the AACIDs board of directors. “As we work to energize this area, we know what the means and the impact it will have on these communities 50 years from now.”