MARTA’s new momentum toward extending the Atlanta Streetcar onto the Atlanta BeltLine by 2027 is “historic” but still too slow, some transit advocates say, and an example of how new federal funding can spur projects while raising questions of equity in which get money first.

Meanwhile, MARTA has revealed key information about the project not mentioned in a May 27 meeting that was the public’s first look at the revived plan in years. That information includes an estimated $175 million budget and the big asterisk that a controversial “feasibility study” of the BeltLine transit plan could alter the route and stops currently recommended by MARTA. 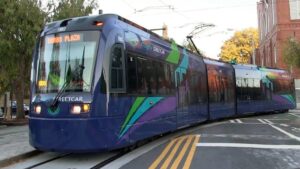 To BeltLine Rail Now, an organization pressing for the long-delayed transit element of the BeltLine to be completed ASAP, the May 27 meeting was a “milestone,” according to chair Matthew Rao. The Streetcar would be the first piece of light rail to run on the 22-mile loop, which is also to feature trails and parkland that are already partly built.

“We are now talking about when and not if. And we are talking about how and not whether,” said Rao. “… So we are excited, conditionally. And everybody should be. This is a historic moment. That meeting, that was history.”

But BeltLine Rail Now also thinks the Streetcar extension could be done in half the time. Rao says it is “not acceptable at this point, 20 years into the [BeltLine] project, to be talking about six [more years] to build 2-and-a-quarter miles” of track. That pace still means decades before light rail on the entire system would be complete, Rao says. And that, his group contends, means trail-only development that will bring “displacement, complete gentrification of neighborhoods in the path, decades of poor air quality, [and] a necklace of concrete [parking] structures” around the city.

Just a couple of months ago, BeltLine Rail now was concerned that the rail plan was at risk as MARTA launched the unexpected feasibility study and Atlanta BeltLine Inc., the organization planning and running the trail, successfully sought a property tax increase to fund only the trail element. The last public meeting about the Streetcar extension route was over four years ago, despite MARTA largely taking over the project from ABI in 2018.

MARTA says the Streetcar extension planning has been ongoing and reached one milestone in February when ABI completed draft environmental reviews for federal funding. BeltLine Rail Now believes the May 27 meeting and fresh talk of the project was triggered by U.S. Secretary of Transportation Pete Buttigieg’s visit to Atlanta less than a week before, where he touted President Biden’s infrastructure funding plan. Buttigieg visited ABI’s office for a roundtable discussion where U.S. Sen. Jon Ossoff (D-Georgia) pressed him on BeltLine transit funding, as ABI’s own website touts in a lengthy blog post.

“You have to believe that these things are all connected,” Rao says.

Sherry B. Williams, a consultant who has long advocated for transit in Southwest Atlanta, doesn’t doubt that metro Atlanta agencies have their eyes on the Biden administration funding. Her question is how some projects get prioritized over others, such as plans for bus rapid transit or light rail on the Campbellton Road corridor.

“A lot of the projects that we’re asking for, we’ve been asking for since before the BeltLine was conceived. So where’s the priorities?” asks Williams about the recent Streetcar news.

Williams says the BeltLine should get its transit, but noted that many residents in the extension’s area already have many transportation options, from private cars to rental scooters to existing MARTA lines. “We don’t have those choices,” she said. “Most of our folks, if we don’t have the bus or the train, we have nothing. People with privilege have just cut in front of the line again.”

That being said, MARTA recently announced a new public input meeting about the Campbellton Road corridor transit, scheduled for June 10.

For its part, MARTA says the Streetcar extension’s estimated budget is currently programmed as coming from local funds: the “More MARTA” half-penny sales tax. However, says MARTA spokesperson Stephany Fisher, “the budget will continue to be refined” and federal funding requests are not ruled out.

MARTA is still in the midst of that feasibility study for the entire BeltLine transit plan. Fisher says ABI’s environmental review work “revealed limits of data and transit gaps” in the planning, triggering the new study. The feasibility study has “no current impact” on the extension plan, Fisher said. But, she added, “Until the study is complete with defining transit gaps and unknowns, we will not know the impacts to the alignment and stops.”

Another big factor in Streetcar operations only touched on in the May meeting is the existing service on a 3-mile Downtown loop, which is notorious for low ridership and delays as it runs in traffic on city streets. MARTA officials briefly said at the meeting that they believe some operational fixes are possible, and BeltLine Rail Now agrees.

“The Streetcar is a colossal failure as it is. And the reason is, it’s faster to walk in most cases than it is to take it,” said Rao. But, he added, possible solutions are numerous and “not all expensive.” A basic one, he said, is to flip MARTA’s frequently practice of shutting down the Streetcar during major Downtown events. Labor Day weekend, when Downtown sees such giant events as Dragon Con and college football kick-off games, “would be a perfect time to test shutting down a couple of streets” and prioritizing the Streetcar over private vehicles for tourists.

Meanwhile, MARTA is continuing to accept public input on the Streetcar/BeltLine extension through June 30 through the project website.

Update: This story has been updated to clarify that Rao was referring to parking structures being built along the BeltLine.