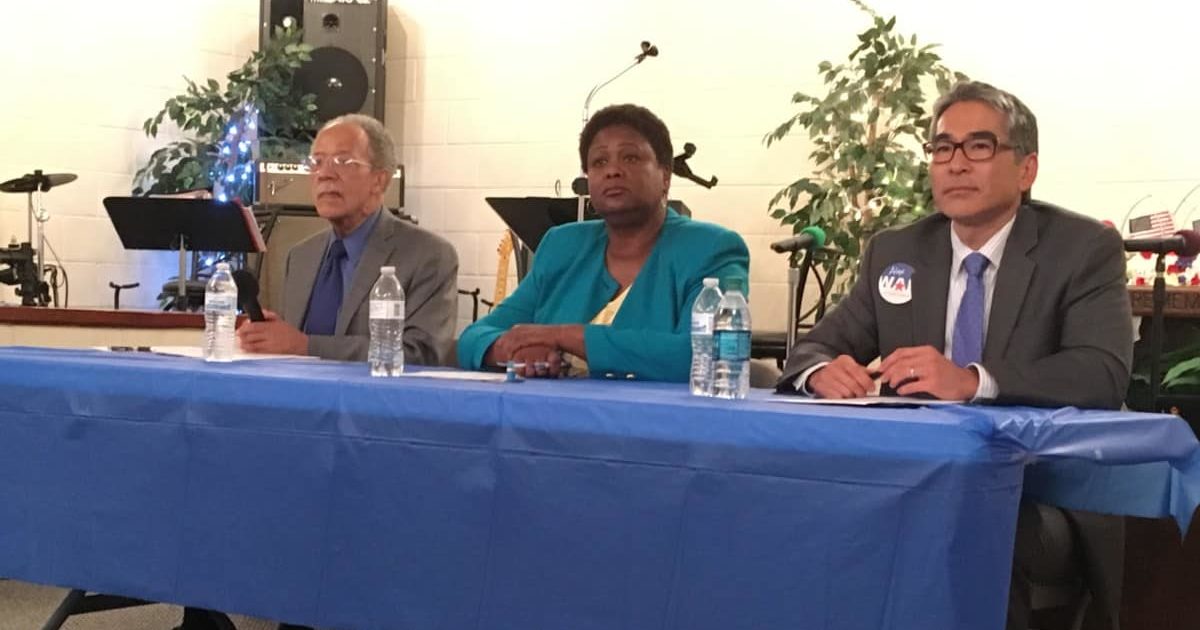 Atlanta City Councilmembers (L-R) C.T. Martin, Felicia Moore and Alex Wan, pictured at a July 19 forum in northwest Atlanta, are all running to be the next City Council president. Credit: Maggie Lee

The three Atlanta City Council members who sat before an audience in a northwest Atlanta church Wednesday night are all seeking a promotion to a higher office — and said what they’d like to leave as a legacy.

C.T. Martin, Felicia Moore, and Alex Wan all represent different parts of town now, but they’re all seeking a citywide office with different powers: that of Council president.

The Council president has several official jobs: appointing committee chairs, subject to council’s rejection; voting in case of a tie on Council; presiding at meetings; standing in for the mayor should the chief executive be unable to do their duties.

But beyond the official duties, Council president’s office is a platform that candidates say they would use differently.

Martin, who was first elected in 1990, said that the president’s job is managing the activities of the council.  “Keeping, I don’t want to say the word ‘peace,’ but keeping everybody

Atlanta City Council members (L-R) C.T. Martin, Felicia Moore and Alex Wan, pictured at a July 19 forum in northwest Atlanta, are all running to be the next City Council president. Credit: Maggie Lee

The west Atlanta lawmaker said he’s believes he’s the best among the president candidates because he knows the mayoral candidates so well: four of his present or past Council colleagues plus incumbent City Council President Ceasar Mitchell are among the frontrunners to be the next executive with whom Council will work.

“If you want to observe the Council whenever we kind of get in trouble, the person that stays quiet for a while then eventually brings forth a solution, I’m very solution-oriented and I believe that I’m the best person to deal with the Council from the management standpoint, the facilitation standpoint … because I know them that well, I know their idiosyncrasies,” Martin said.

Moore, who’s represented parts of northwest Atlanta since 1997 said that her approach to being the Council’s president won’t be very much different from that of being a member.

She said she’ll still be up on the issues, have an opinion on them and will ask critical questions to make sure Council has the information it needs to set policy. She also said she’ll work to get information out to the public about city operations.

“Where you feel that your voice isn’t being heard, the Council president can create that space and place for citizens to have their input,” she said.

As a Council member, she’s published her office’s own expenses and wants others to do the same. (As president, she said she’d ask anyone who wants to be a committee chair to put their expenses online too.)

She also wants the city’s spending and revenue figures posted online in great detail: things like city spending down to the checkbook level and the numbers of affordable housing units that are promised by developers as well as the number actually built.

Wan, from northeast Atlanta, was first elected to Council in 2009. He said his professional background — for-profit, nonprofit, higher education — is important to how he sees the president’s job.

“Council president … (has) the ability and a platform to convene stakeholders, not just the public but (also) the nonprofit sector, the business sector, higher education and the public to come and talk … share ideas, brainstorm, and devise solutions to our complicated problems.”

For example, he said, the Beltline got its first City Hall toehold in a former Council president’s office, that of Cathy Woolard.

“I think there’s a real opportunity there and that’s something I’d like to take advantage of,” Wan said.

With more than three months until election day, the forum drew about two dozen folks to the little church near Underwood Hills Park.

After the candidates introduced themselves, they took questions from the audience. One man asked each candidate what kind of legacy they’d leave.

For Moore, it was “transparency.” She said she wants to reform how city government does things “and that starts by understanding first what your government is doing.”

Wan said that he would want his Council presidency to leave behind changed feelings in Atlanta. “To make everyone feel like they had a fair shot, they had the same shot at economic opportunity, they had the same shot at building and strengthening community, same shot at quality of life across the city that I don’t feel like we have right now,” Wan said. “A lot of the conversations we’re having about affordability, about public safety about transportation, about infrastructure, it’s still very divided.”

The three candidates together have raised nearly $600,000 in campaign donations. The election is set for Nov. 7. If no candidate wins more than 50 percent of the vote, a runoff will be held Dec. 5.

The forum, attended by nearly 40 people, was organized by the Northwest Community Alliance, a nonprofit coalition of northwest Atlanta neighborhoods and “neighborhood-friendly” developers and businesses that promote smart growth. They meet bimonthly with guest speakers who are typically relevant to issues important to the neighborhoods or to the city as a whole.

Updated with host organization and description.