The latest site plan for the Atlanta public safety training center as presented at an April 26 meeting of the Community Stakeholders Advisory Committee.

A DeKalb County commissioner has formalized his call for more review and a racial injustice history lesson for Atlanta’s controversial public safety training center plan. Meanwhile, police say they are bracing for a July 23 to 30 “Week of Action” by the Defend the Atlanta Forest protest movement.

Those protesters are also heating up their spotlight on another nearby green space controversy. Part of DeKalb’s Intrenchment Creek Park that last year was swapped to former movie studio executive Ryan Millsap. Millsap, backed by an unexplained DeKalb Police Department (DCPD) presence, on July 15 barricaded a trail entrance to the land in what may be a reaction to the ongoing protests.

The $90 million training center facility, which would train police officers and firefighters from Atlanta and outside departments, is planned for 85 acres of the former Atlanta Prison Farm, a piece of property that is owned by the City of Atlanta but sits outside city limits on Key Road in unincorporated DeKalb County. The Atlanta Police Foundation (APF), a private nonprofit, is leading the planning. A council-created Community Stakeholder Advisory Committee (CSAC), supervised by the APF itself, is reviewing the plan. 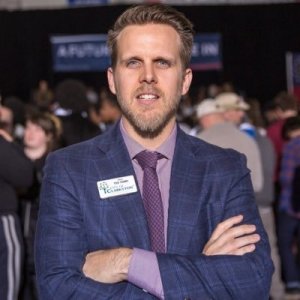 On July 19, DeKalb District 6 Commissioner Ted Terry made good on his previously announced intention to file a resolution seeking a deeper review than the CSAC — the only body publicly reviewing the plan — has provided. His resolution largely restates environmental review concerns that were pressed by Lily Ponitz, his appointee to the CSAC, who was controversially removed by other members last month for publicly criticizing the plan.

The core of the resolution is a call for a full “Phase II” environmental review and a noise study prior to the County issuing a land disturbance permit for early work. Construction permitting is the only direct review the County has over the plan, which is exempt from zoning because of the government’s role in it. APF and its consultants are already working on an acoustical study — which Terry did not realize — and have said the environmental review meets state standards. But Ponitz, an environmental engineer, questioned that repeatedly. In one basic issue, the original version of the survey did not include all of the facility’s footprint, an error that has since been corrected.

Terry says such a review is both environmentally and financially conscious because it ensures the space will be safe for the public and avoid surprises if pollutants are discovered during construction. “It’s designed to hopefully prevent major costs or major pitfalls you might not know about,” he said. Terry specifically called for the facility’s shooting range to be enclosed rather than open as currently planned.

Terry also wants the CSAC to act more like a planning commission or other formal review body by taking a recommendation vote on the plan with teeth to prevent it from moving ahead otherwise. The CSAC currently does not operate that way, with the finalization of a site plan earlier this year going barely mentioned in its meetings, which have been more focused on green space, traffic mitigations and other neighborhood items.

Terry noted the Prison Farm site is zoned residential, meaning any non-governmental project would go through a major rezoning process with all of its public input and legal leverage. He said he believed the idea of the CSAC was that because “they don’t have to follow our zoning laws, the goal was to try to emulate the process.”

“Getting their opinion on the record, I think, is important for posterity,” said Terry of the call for a CSAC vote. “It gives a greater transparency and [acts] as a seal of approval. If anyone else proposed, ‘I’m gonna do a $90 million development in your backyard…’ people are gonna say, ‘I’d like to get a little say in that because that’s gonna impact [the community].’”

Another request in the resolution is that the CSAC create a “History, Reconciliation and Reparations Committee” to look at ways of educating the public about the site’s use of slave labor and as land that was taken from Native Americans. The APF has been working with the nonprofit Atlanta Preservation Center on some preservation aspects, including the unusual presence of parts of a demolished library dumped on the site, but the CSAC has not discussed those larger historic contexts. In a nod to more recent racial justice controversies, the City and APF previously referred to the training center as including an “Institute for Social Justice,” but that term has disappeared in recent discussions for reasons officials have not explained.

Terry pointed to Atlanta’s former Chattahoochee Brick Company site as a model. That Northwest Atlanta facility infamously used prisoners as rented workers in what was essentially legalized slavery. After a development controversy, the City and The Conservation Fund announced the purchase of the land with the intention of memorializing the evils of its past.

The resolution was sent for consideration to the commission’s Planning and Economic Development & Community Service Committee, where it is expected to be on the July 26 meeting agenda.

The CSAC met on July 19, the same day Terry introduced his resolution, and spent much of the time discussing the local effects of the protest movement, which has often been peaceful and legal, while at other times including vandalism and trespassing. The protesters have dubbed the facility “Cop City” and are focused on environmental and police reform issues. With the protests gaining national attention and support, the Atlanta Police Department (APD) has said the Georgia Bureau of Investigation and the FBI are now involved in combating the illegal aspects.

Recent vandalism of security cameras and other property in the area hit home for CSAC chair Alison Clark, who lives in the Boulder Walk community. Clark said in the meeting that cameras in the community had been damaged. “I know they also painted some colorful words on our community fence.. and it’s something that says ‘F Cop City,’ except obviously that word is spelled out, and that is right on the entrance to our community,” she said, asking about police response.

APD Interim Assistant Chief Carven Tyus said told the CSAC that DCPD is increasing patrols and using undercover officers in the area. He said APD has plugged local cameras into its “Video Integration Center,” where officers can do live monitoring, and that the GBI and FBI are looking at “electronic signals” evidence to identify suspects in the vandalism.

Asked later via an APD spokesperson what “electronic signals” means and if authorities are monitoring cell phone conversations or usage data in the area, Tyus gave answered: “While we have no intention of monitoring private conversations, we will utilize every technology at our disposal to ensure that our communities remain safe from anarchy and private property does not continue to be vandalized and defaced.”

Tyus told the CSAC that APD pressure at the training center site is so good that protesters have been pushed out as far as Conyers in Rockdale County, where they “started committing mayhem.” The Conyers Police Department later said “nothing occurred” there related to the protests. The Rockdale County Sheriff’s Office could not immediately be reached for comment.

Tyus also informed the CSAC about the protesters’ “Week of Action” plan and cited some publicly announced events that included street medic training and Alcoholics Anonymous meetings. He later clarified that he mentioned those as examples of “innocuous events” noted by APD as it looks for plans for “civil unrest” on social media. “Currently we have no plans to attend any of their public events unless there is a need for police intervention,” he said.

The Atlanta Fire Department (AFD) also gave a presentation at the CSAC meeting, broadly describing the benefits of the training center to its firefighter training. The purpose of the presentation so late in the process — with a site plan already finished and a land disturbance permit application underway — was unclear. An AFD spokesperson said it could take three days to get a response to questions about the purpose and whether it came from concerns that the plan might be withdrawn. The protests have focused on the police use, with firefighter use often unmentioned.

Besides the training center’s inherent controversies on policy and location, it fits into broader tensions over the future of public land in southwest DeKalb. One big picture, as Clark reminded the CSAC on July 19, is the South River Forest vision of 3,500 acres of interconnected green space. A public input process to define that vision for possible multi-government action is underway. 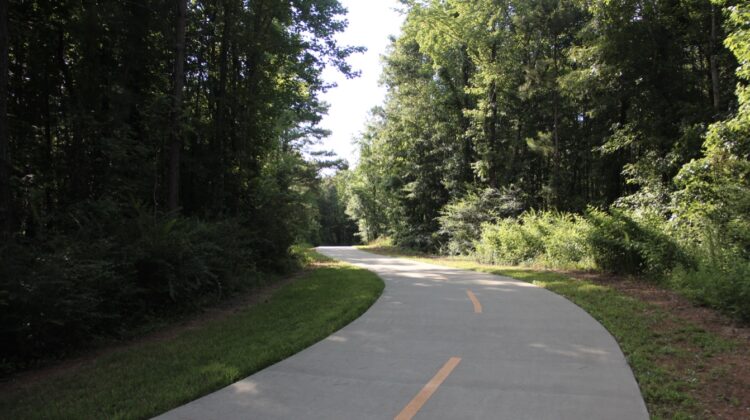 A trail in Intrenchment Creek Park. (File photo via Wikimedia.org.)

Then there’s the issue of the land swap at Intrenchment Creek Park, directly adjacent to the former Prison Farm. In that deal, the County gave Millsap — who founded the neighboring Blackhall Studios filmmaking complex — 40 acres of the park at Constitution Road and West Side Place in exchange for 53 acres of other land to create a new park. Millsap more recently sold the movie facility, now known as Shadowbox Studios, but still owns the 40 acres, which have remained open to the public.

The reason for Millsap’s barricading of a West Side Place trailhead and posting of “no trespassing” signs is unclear. Millsap did not respond to a comment request, DCPD said its officers were on the scene during the installation of barricades but did not explain why. APD and DCPD officers have accompanied construction crews at the training center due to protesters, and DCPD also was on the scene during some type of bulldozing work in the park area in May.

Chuck Ellis, director of the County’s Department of Recreation, Parks and Cultural Affairs, told commissioners in a July 15 email that eventually fencing off of the property was expected but that Millsaps’ move that day was abrupt. “It was expected as [sic] some point, but no timeline was given until we very recently received notice that they were thinking of fencing off their property,” he wrote. The County removed a trailhead sign from the property, he added.

SRFC co-manager Joe Peery says the closure is unlawful because of the pending lawsuit, which could declare the land deal void. “This is a DeKalb County park, and remains so until the court decides on the Blackhall/Intrenchment Creek swap,” he said in an email.

A County spokesperson said it won’t comment on litigation, and Kasey Sturm, the plaintiffs’ attorney, did not respond to questions.

The Defend the Atlanta Forest protesters are taking up the cause as well and announced a July 20 press conference at the site.