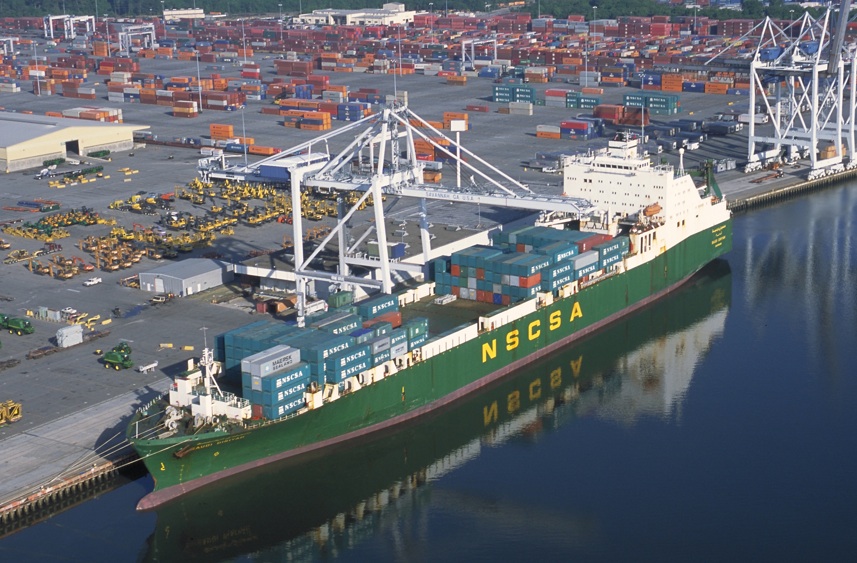 The Port of Savannah was handling so much cargo that had been redirected from West Coast ports that it was nearing critical mass. File/Credit: Georgia Tech Research Institute

When Curtis Foltz looks to the future, the head of the Georgia Ports Authority sees a day when ports around the nation won’t be able handle the demand for moving freight. 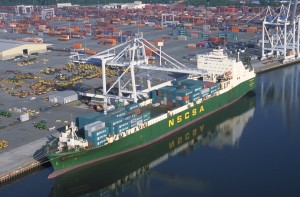 The Port of Savannah was handling so much cargo that had been redirected from West Coast ports that the ports chief said in February the wharves were nearing critical mass. File/Credit: Georgia Tech Research Institute

“Generally speaking, our ports are falling way behind in terms of modernizing, capacity, velocity, and utilizing capital,” said Foltz, GPA’s executive director since 2010 and head of the nation’s fourth largest, and fastest growing, container port.

Although Savannah benefitted greatly from traffic directed there by shippers worried about a potential shutdown of West Coast ports – with Savannah’s year-over-year container volume up 13 percent in 2014, compared to average annual increases of from 4 to 5 percent – Foltz told dcvelocity.com, a trade publication, in February the Savannah port was reaching critical mass.

A spokesman for the Port of Virginia said in the same report that capacity at their wharves is growing scarce.

Foltz remarks came as he was blue-skying about the future of the freight industry, the day after more than 2,000 folks who have an interest in the logistics industry met in Atlanta last week at the Georgia Logistics Summit. 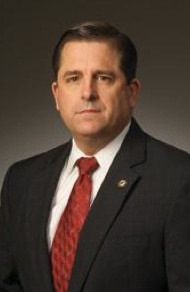 The tone of the conference was generally upbeat. International trade has rebounded since the great recession. The growth is likely to continue at a rate comparable to the increase in global gross domestic production, according to a 2011 report by PricewaterhouseCoopers, “Future of World Trade.”

However, the other side of the coin of rising demand is the ability of U.S. ports to serve the rise in traffic. Foltz said the looming challenges highlight the lack of a national entity to oversee the nation’s seaports.

Unlike highways and aviation, which have federal oversight, ports are managed at the state or local level. Foltz cited a variety of structures that may be run by the state, as in Georgia; or owned by the state and run by a private entity; or overseen by an organization that includes municipal governments.

“We don’t have a federal system to promote and prioritize freight corridors,” he said. “I’m not here to say we want more federal regulation. I am saying, as a nation, we are falling behind. Absent a central body, the nation’s going to fall short of keeping pace with our international competitors.

“There are ports that need to be deepened, to have better water access; bridges that need to be raised or removed so modern, efficient ships can access ports; ports that don’t have the great road and rail connectivity we have in Georgia, which means the freight can get off the ship, but not to the customer,” Foltz said.

For example, harbors serving ports in New York and New Jersey are plenty deep to handle the big boats expected to arrive once the Panama Canal expansion is finished. But the big ships still can’t access the wharves because the Bayonne Bridge has to be raised by 65 feet to accommodate the big ships. The project is 25 percent complete and due to be finished in mid 2016, according to a report in logisticsmgmt.com, a trade publication.

The Port of Virginia has logged increases in truck and rail traffic, 9.1 percent and 14 percent, respectively. John Reinhart, the port authority’s CEO/ED told logisticsmgmt.com: “The growth is significant, but it has created significant challenges as well, especially in service levels for our motor carriers.”

Foltz said these issues are all part of what he calls the “broader message” about the nation’s capacity to benefit from the rising amount of global commerce.

“It’s proving how fragile our port system is,” Foltz said. “We, as the ports community, haven’t done a good job of preparing for the future needs of industry, and supporting the growth of our economy.”