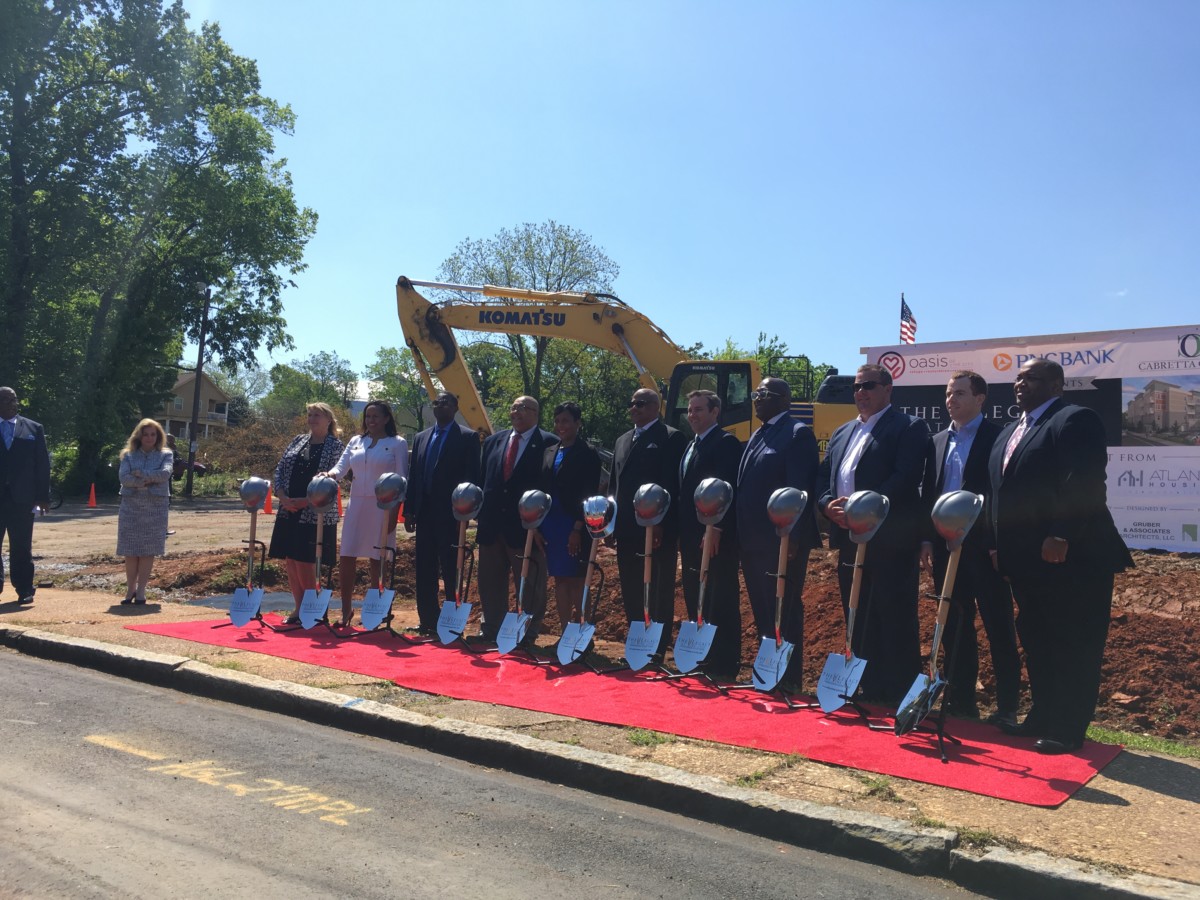 A big yellow excavator at Spencer and Walnut streets in Vine City was still on Friday morning — but just for a while, so folks could enjoy a ceremony to mark the groundbreaking for an apartment being built there so that seniors can afford it.

The 105 apartments there will be for people aged 62 and better, said Bishop Dexter L. Johnson of the building going up across the street from his Higher Ground Empowerment Center Church. 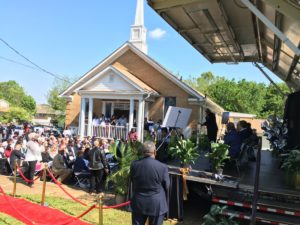 Bishop Dexter L. Johnson addresses a crowd outside of his Higher Ground Empowerment Church, at a ceremony for the groundbreaking of a new senior apartment complex. The church is a partner in building it. Credit: Maggie Lee

The wherewithal to build it and get folks in there comes from a complex mix of funding, heart and dedication: a bond from Invest Atlanta, rental assistance from Atlanta’s housing authority, state funding, tax breaks, the Beverly J. Searles Foundation (a nonprofit developer), and the Oasis of Vine City (a project of the church.)

It took years to get all that assembled — somebody joked that Johnson that went from pastor to bishop in the time it took for his idea for it to come together.

The way it’s set up will “allow our seniors to move into this facility based upon their income. The average rent on a one-bedroom right now will run about $834 or a little bit higher,” Johnson said. “But the average rent right now in this community is is $1,100. That is displacing many of our residents. But this project will allow us to have resident retention and it will address the affordable housing needs and concerns that we have in this community.”

Folks won’t necessarily pay that $834 or so sticker price for rent. If that’s too much of a person’s income, housing vouchers will make up the difference.

Construction will take a bit over a year, roughly. Probably a little after the first of next year, they’ll start looking for tenants.

It probably can’t open soon enough. From the plot where The Legacy at Vine City will rise, the skyscrapers of Downtown and Midtown are visible. It’s a short walk to the new Mercedes-Benz Stadium, which also pokes over the horizon. The apartments will be a few hundred yards from where the city’s building the 16-acre Rodney Cook Sr. Park.

In other words, it’s a place where longtime residents face getting priced out by wannabe residents who have more money.

Gentrification hangs over the neighborhood like the arm of that excavator parked at the corner.

Vine City and English Avenue are Atlanta City Councilman Ivory Lee Young Jr.’s stomping grounds — his home is on Griffin Street, he told the crowd of more than 200 people.

“Folks, we have every reason to have anxiety about what’s next,” he said. 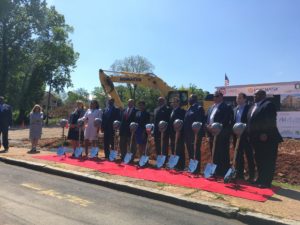 But he shouted out the things that help his  neighborhoods and the dedication it takes to organize them, like Westside Works, a job training program.

“There are hundreds of residents right here today that are here to tell you we’re not going anywhere,” Young said. “We’re here to stay and it is our job to ensure we create more and more opportunities for people to live affordably.”

Mayor Keisha Lance Bottoms’ parents were married on Walnut Street — and her family has long history in the neighborhood.

It’s a beautiful project, she said, and there’s no community that deserves it more.