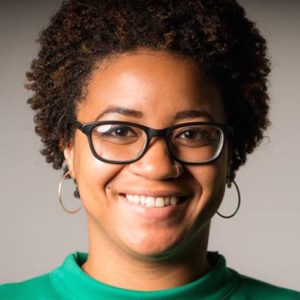 Some comments have been lightly edited for clarity.

A: A: One of the biggest things to me is that there’s a lot of change that has been long-awaited that is coming to southwest Atlanta. We’ve got a ton of investment on its way in the form of TSPLOST [transportation] and Renew Atlanta funds that are going to transform Campbellton and Cascade roads, which are the main corridors in the district. MARTA is even proposing a light rail line coming down Campbellton Road that a lot of residents feel strongly about.

We’re envisioning a Greenbriar Mall redo and we’ve got some development pressure coming from the new city of South Fulton, Aerotropolis and Fort Mac on the other side of the district. Just in a few short years, everything’s going to be different, it’s going to be improved. So my main concern is that when I’m walking around in the community, talking about all this stuff that’s coming our way, people do not know about it. This is a problem of course because all of this investment is going to do a lot, like increase our property values. But that also means we’re going to have higher property taxes and that also means that rent’s going to go up. All these things are happening and people have no idea that it’s coming. And so if they don’t know that it’s coming how can they position themselves for success?

I’m afraid they’ll be in a position where they’ll be taken advantaged of, as I’ve seen happen to people on other sides of town. So my main concern is keeping people informed and involved, making sure that they’re part of shaping this growth, but they also know how it will impact them and the things they should be doing to prepare for what’s coming.

Q: What can you as a City Council person do about these concerns?

A: The main thing that I want to communicate during this campaign is the kind of relationship that I want to have with people in the district. I am all about being responsive and being present in the community. It comes from my background as a grassroots community organizer. Some of it is doing the softer things like coming to more NPU meetings in the district and attending community association meetings, or just hanging out and being present so that people can find me. When they call my phone or my office, somebody is there, either myself or a staff person, to help talk them through whatever concern it is they might have and be a real partner with them in solving problems.

That’s the softer side of it. The harder side of it is: when we know that major policy decisions are being made, these major financial investments, whether in my district or in other parts of the city, it is important that I communicate about it to my constituents, the people in my district. I want to talk to them about their concerns and take their feedback and use it to help shape the legislation before we pass it. Same goes for the budget. We do a budget process every year and a lot of people have no real say in what’s going on. Many don’t even know when the budget’s being made, and there is only one public hearing. It’s just about making sure I’m telling the community what is going on, and giving them these opportunities to weigh in and help influence and shape the budget and any legislation before we pass it.

Q: What’s an uncomfortable truth that the next Council will need to face?

A: I think that the uncomfortable truth is that the city has problem with racism and it’s sort of hidden itself in the form of classism. We cater to the wealthiest people in this district and I understand that a big part of way that Atlanta’s economy works. We court these big businesses, these big job creators so that we have industry that can sustain the working class population. But what’s happening is we end up being a lot more responsive to the wealthier people in the city, the people who have more resources, the people who have more time to be engaged in government. We end up catering and making decisions that make them happy that consistently are at the expense of people who have less than.

In my district specifically, there are a lot of people who are feeling left out and they’re feeling unheard. They’re feeling like they’ve seen the other parts of town grow and develop and see other people thriving and succeeding. Yet we’re still dealing with problems in our community that we’ve been dealing with for decades and they’re being ignored. Not enough resources are being spent to address these problems. So I think the question we really need to grapple with as a city is: Why is it that when there’s a pothole or something crazy happening in Buckhead or Druid Hills that those issues get solved quicker than any issues that we me might be facing in southwest Atlanta?

Q: Over the last four to eight years, what’s something this Council has gotten right?

A: I think that the city investing in revitalizing areas of town that have been languishing, they’ve gotten that right. You can criticize a lot of things that they’ve done, they way that they’ve approached a lot of these projects. But we’ve got a huge, shiny new Mercedes-Benz Stadium, Georgia State taking over the Turner Field area, which has long needed revitalization, Underground Atlanta is about to be redone and now of course they’re looking at the Peachtree and Pine [streets] area and the Atlanta Civic Center. I think that over the years, they’ve done a lot to improve and revitalize parts of Downtown and Midtown …those are areas in the city that were languishing, they weren’t doing well and the city has done a lot to bring investment to those areas. So I think that’s one thing that they’ve done right.

I think that the other angle, where the double-edged sword comes in is the things that people are upset about… benefits like affordable housing, all the tax breaks that we’ve given… have we gotten the most bang for our buck? They’ve done a lot of great work getting investment, but did they get everything they could have gotten for the people of Atlanta in the process?

Q: That kind of plays into my next question. What’s something that over the last four to eight years this Council has either gotten wrong or failed to do?

A: I think that the obvious ones are affordable housing and transit. Certainly there’s a big conversation right now about Atlanta’s losing our affordable housing and this of course in the face of gentrification, people moving back into the city. Which isn’t unique to Atlanta by any means, but it’s certainly a challenge. We could have been a lot more intentional in thinking about this. So now we’re kind of playing catch up, and we’re scrambling and we’re throwing all of these ideas out. It’s just really important that whatever the Council decides to pass, it is something that is thorough and well-funded and not a band-aid approach, something that goes a little bit deeper and really commits the city to making sure affordable housing is a key part of the way that we build and design moving forward.

And then of course with transportation. I think the city’s done a lot to invest in our transportation infrastructure and obviously the biggest handicap is bringing Cobb and Gwinnett onboard. I know that city officials have to focus on the city, but I do wish we would have done a better job building a relationship with the suburban counties that, like it or not, are key to our future. Our ability to thrive as a city is tied to the region.

A: As a wife, mother of a 2-year-old, an activist and a community organizer who studied public policy at Georgia State, I know what it takes to lead this city through this time of transition. We have a situation where people don’t trust their government. People don’t trust that the leadership in Atlanta is doing the best thing possible for people. And then we’ve also seen lots of bad policy decisions being made, lots of bad planning decisions being made. So we need someone who really understands what good design is, how we can use legislation to shape our city, and also knows how to engage the community and make sure that they have real buy-in and involvement and engagement in what’s happening. That’s a skill that I bring to the table given my experience.

When I started organizing on transit expansion [to Clayton County], they said “Clayton County needs MARTA. MARTA hasn’t expanded since the 1970s, good luck.” That’s what I was told, and I went in with the principles of grassroots community engagement leading the way and we not only expanded MARTA to Clayton County, we helped create an environment that led to a $2.5 billion MARTA expansion here in Atlanta. It’s now pushing the conversation in Cobb and Gwinnett in a way that they’re taking some concrete steps to expand their transit systems. If I was able to do that, imagine what more I can do for the city if I’m able to work on all of the issues, and not just one piece of the issue.