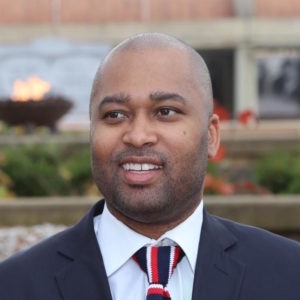 Update Oct. 17: Since this story originally ran, Duwon Robinson has been definitively disqualified from having his name appear on printed ballots.

Answers have been condensed and edited for brevity and clarity.

Note: Duwon Robinson has been disqualified from having his name appear on printed ballots, but he says he is going to appeal that disqualification. If he fails to appeal, or does not appeal, his name will not appear on the ballot.

Atlanta City Council would be his first elected office.

A: My No. 1 concern is, for the last 40 years, I just turned 40, for the last 20-some years of leadership by Ms. Moore, a lot of District 9 has been forgotten about and undeveloped. People have been pushed out with nowhere to go. That’s my main concern. Low quality of life, no economic development, I’ve watched the grocery stores be taken away, the bank, the pharmacy. I’ve watched all of those things taken away and nothing good has happened in District 9, on the other side of District 9.

A: We have to include everyone. One side of the district is half Caucasian. The other other is black. So you have the Caucasians on the side which is kind of middle class to upper class. When you have representation that forgets about the poor side, then they have no side but to come on your side of town and vandalize and steal and break in and make things unsafe for you because they have nothing over there. The poor can’t steal from the poor. She doesn’t realize … because she’s not from the district [by birth] … when you create a bunch of have-nots, then they only have the “haves” to break in and vandalize. So the public safety issue is one that is simple to me because if you help young people pick up a job then they put down the gun …

Q: What is an uncomfortable truth the next Council needs to face?

A: The uncomfortable truth is that we’ve had black leadership in Atlanta since 1974 and it hasn’t worked for all of Atlanta. We have never had a collaborative effort with City Council members working for everyone … it worked for those who came out of civil rights, it worked for their grandchildren, their families but it has not worked for all of Atlanta and we need new leadership that is really for all of Atlanta whether it’s white candidates or not. I don’t think all white is wrong and I don’t think all black is right. It’s about right and wrong and we have to face that truth and say we have given our support to those just because they’re black. We have to be open, we have to have someone that’s going to include everyone because it has not worked for 40 years that I’ve been in Atlanta…[iframe width=”400″ height=”300″ scrolling=”no” align=”right” frameborder=”no” src=”https://fusiontables.google.com/embedviz?q=select+col10+from+1uDWKbm8wSQ8wT1sXrOvQU2RegYhP3g6mgMwmh5uo&viz=MAP&h=false&lat=33.79476643129319&lng=-84.46131933593749&t=1&z=12&l=col10&y=2&tmplt=2&hml=KML”]

Q: Over the last four to eight years, what is something this Council has gotten right?

A: Decriminalizing marijuana. Making it if you get caught with an ounce or less, you pay a fine. That’s something that’s big because what happens is it makes the cops aggressive if they pull you over and they smell marijuana … now it makes the cops not be so aggressive because they know they can’t arrest you if it’s less than an ounce, now they have to give you a citation. It should kind of scale back on racial profiling.

…working at workforce, we were trying to get Council to come up with $15 hour for city employees into law. They finally did that this summer so that was another good thing that they got right. But other than that … I think it’s been the worst Council ever because they were scared of Mayor [Kasim] Reed … none of them had the gall to stand up and speak out against it and realize that you have the power, the mayor doesn’t have the power. He needs the votes …

A: This Council has failed to step up to the mayor, has failed to represent the people who voted them in. Because they were all planning to run for mayor. So therefore they have been campaigning for the last four to eight years instead of taking care of their constituents and being good stewards of City Council. They failed to do that because they were scared of Kasim Reed and they wanted his support. Everything they have done in the last four to eight years has been political instead of the right thing to do.

A: I am from the housing projects in the city of Atlanta. I don’t have friends that are contractors. So for me, that point of corruption and bribery, I don’t have friends that have their own companies to even ask for contracts. I am someone who believes in the inclusion of all. I don’t believe in discrimination of any kind. I am fair, I have my degree in political science, my master’s in public administration, so I know what I’m doing. I wouldn’t be one that would fight against my colleagues, I believe in collaborating. I am not bagged or owned by any political groups … so no one would own me. And I just stand for what’s right, it’s not about black or white with me or any other kind. It’s about what’s right and wrong, that is what I believe in …