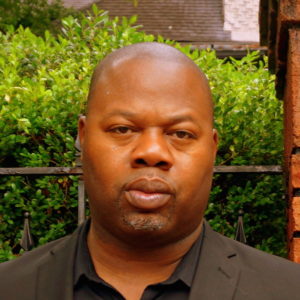 Some comments have been lightly edited for brevity and clarity.

Atlanta City Council District 4 would be the first elected office for Mr. Adassa, who just goes by one name. He wants to make city government more lean and efficient.

A: It’s complex … The two main ones that get floated around are … [one,] gentrification. The reason why that’s so important to me is because I see gentrification as progress, it’s not something that you can stop, but what needs to happen when you’re in a historic district like this is that people need to feel like they’re a part of that progress.

And so I think that addressing transition, for me, is the most important thing that I would address here. Make sure that individuals are educated, make sure they understand the resources that are available.

And then a close second would be public safety, because right now we have a lot of concerns with public safety here locally while the community’s transitioning, the residents are not feeling that there’s enough of a presence of our authority figures, police officers, things of that nature. So that’s a close second for me.

Q: You’ve already kind of talked in a way that plays into my next question: what can you as a Council member do about these concerns? What are your proposals or policy plans?

A: One thing that is tops is that you have to accessible. What I mean by that is, having been here in the community for over 12 years now, I have had first-hand experience with our current city councilwoman.

… A lot of times, I go to neighborhood planning unit meetings … great ideas will be tossed around around the room and then we say well, “How can we implement that?” The answer is always “Talk to your city council person.” And a lot of people don’t even know who that is. It’s amazing someone can be in office as long as they have and then they say, “I don’t even know who she is.”

My No. 1 thing as far as being able to implement these policies is one, accessibility, making sure that people know that I am available … I would like to have more town hall-type of meetings. Not just NPU and West End Neighborhood Development meetings, but more town hall-type meetings where everyone in the community can take part in having their issues addressed.

Q: Turning to Council, what’s an uncomfortable truth the next Council needs to face?

A: For me … we live in a community where we have a high level and high degree of entitlement in this community. And a lot of people, they ask the question, “What is it that the government can do for me?” … I think that, according to who you ask, we’re working at a surplus now; according to who you ask, the mayor has done good from a financial standpoint and so we have a little [city] money to play with.

The problem is, people see that as: “Oh well that’s great, now we have more money, so it’s more money to spend.”

And so I think one of the truths that we need to deal with is letting people know that part of what makes a government run smoothly is when the people are involved in the process, not just a government, but the people, are involved in the process of educating themselves and building a stronger community. And I think that that’s one of the things that inside City Hall, they don’t encourage enough.

… In City Hall, we talk about how we can spend money on programs programs, we’re going to build this, that and the other. We never really talk about the real truth of the matter: where that money comes from.

There was so much talk at the recent forum that I attended, of hundreds of millions of dollars of spending on various programs that supposedly did not work. That just, to me, it kind of says we need to have a better conversation about how government works and what government’s real purpose is in everyone’s lives so that the community understands what it is that we’re supposed to be doing as elected officials.

Q: And again on Council, over the last four to eight years, what’s something that this Council has gotten right?

A: That is really hard to say. I’ll tell you why: I’m in the community, I own the West End Community Business Center as well as the West End Business Education and Development Center. One is a for-profit, one is a nonprofit. Their purpose in the community is to encourage business growth within the community. So if people that live here are interested in starting a business, growing a business. What I’m finding is a lot of times, I talk to people that have tried to go to the city, go to City Hall, try to get them to actually assist in the process to make it easier for people to open businesses.

The best thing that they [City Hall] can do it seems it get out of the way. Because it’s in autopilot now. There’s a lot of great things that are happening here in our community and I don’t think that they’ve necessarily been a part of that happening. I think what is happening in groups like NPU and WEND have contributed much more to the community’s growth process. So I really can’t say what they’ve done well.

Q: My next question is over the last four to eight years, what’s something this Council has either gotten wrong or failed to do?

A: Well as you know, we have an investigation that’s currently going on, part of the procurement situation. But I think what they have not done right is, No. 1, be accessible. No. 2, they’ve not gotten involved in local issues. They haven’t been present at the meetings, at the gatherings when people are expressing things that they want to do, they haven’t been present. That’s really the big thing, they need to be present.

A: My pitch to voters is that running for City Hall for me is a continuation of what I already do, just on a much grander scale. I’m already in the community, I understand not just the needs of the people, but I have a great and strong understanding of business. I think that that’s important. I believe that the next councilperson should have, I’m not saying they need to have a degree in psychology, but they do need to understand how people think, how people approach things, and how people operate. I think that’s critical. And too, they need to have a strong understanding of business. That’s really how we should run the government: we should run it with respect for money, respect for finance and respect for the community, and then just protect the individual rights of our constituents. That’s the individual that I believe myself to be.