Atlanta’s housing authority has finalized a deal with its outgoing CEO, and will pay $260,000 in severance as Catherine Buell transitions into a paid consulting role.

That consulting role will last up to six months and will pay $21,666 per month, for Buell’s help to “ensure a smooth transition” to the next AH leader, according to an agreement between Atlanta Housing and Buell. 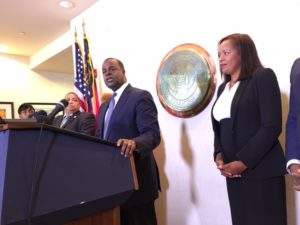 The chairman of the Atlanta Housing board, Christopher Edwards, said in a written statement that he’s pleased to announce that after two months of negotiations, the agency has released a “compromise separation agreement” with Buell.

“The compromise eliminates our exposure to the expense of another long and costly lawsuit. It allows Atlanta Housing’s CEO and staff to focus on its mission of providing affordable housing,” he wrote.

“And it’s one more important step in getting AH out of the expensive and distracting lawsuit business. We wish Ms. Buell the best in all of her future endeavors.”

Buell led the agency when in 2017 it sued major developer Integral Development and related entities over a land deal. A judge has thrown out that suit, but a counterclaim continues.

Buell’s original employment agreement appears to entitle her to two years’ salary in case of termination without cause, though another clause suggests both sides might negotiate severance terms.

But there will only be one leader, past or present, in the AH building at a time — the agreement says that Buell will be available by phone and email unless the two sides agree on an in-person meeting.

Buell has been an Atlanta Housing executive since early 2016. The board named her to the top post less than a year later.

This April, Atlanta Mayor Keisha Lance Bottoms announced that as she set up her own leadership team, Buell would be one of the leaders who would depart City Hall.

In May, the agency’s board elected one of its members, Brandon Riddick-Seals, the interim authority leader as a search for a new agency head is underway.