Park Pride discussed Tuesday results of a study that outlined a number of funding opportunities for Atlanta’s parks and recreation, followed by comments from four candidates for Atlanta mayor or their representatives. 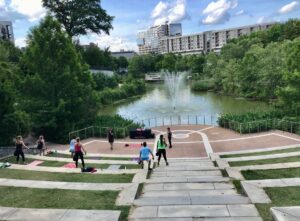 The acclaimed water feature of Atlanta’s Old Fourth Ward Park was a collaboration of the city’s parks and sewer entities. The pond helps ease flooding in the area while creating a park in an area that had been short of park space. Credit: Kelly Jordan

The thrust of the report, “Atlanta Department of Parks & Recreation Assessment,” is that Atlanta cannot continue to rely on philanthropy to acquire, develop and maintain park space. By one measure, 37% of all spending on Atlanta’s parks is provided by private donations.

A primary recommendation is for the city to create a parks authority that could sell bonds, backed by the city’s full faith and credit. In addition, the authority could engage in other measures to raise additional revenues for parks.

The program Tuesday continues an effort by parks’ advocates to ensure parks and their funding are a political touchpoint in this year’s campaigns for mayor, city council president and all council posts. The public effort started in May, when The Trust for Public Land released its 2021 ParkScore ranking that showed Atlanta ranks 49th out of 100 cities surveyed. In September, ParkPride and a dozen partners plan to host a candidates’ forum.

To that end, two candidates and representatives of two candidates were invited to pitch their parks ideas at the end of the 90-minute virtual meeting: 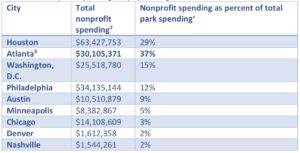 Atlanta ranked first among nine cities reviewed for spending by non-profits to support parks. The rank counts all spending by Trees Atlanta, which does plant trees on private property in the city. Credit: ‘Atlanta Department of Parks & Recreation Assessment’

These comments came after the main presentation by Charlie McCabe, a parks and placemaking professional who presented findings of a study funded by the Blank Foundation and executed by The Trust for Public Land.

The report advocates for the creation of a parks authority, a recommendation that dates back some 20 years, to Mayor Shirley Franklin’s administration. The reasons remain the same – access to money, which this report characterizes as:

A parks authority could shift control of parks funding from the political pressures of Atlanta City Hall to a smaller entity of fewer than a dozen members. Terms of appointment powers, remuneration and other matters are details beyond the scope of the report.

George Dusenbury, now with The Trust for Public Land as state director for Alabama and Georgia, a former Atlanta parks commissioner and a three-decade veteran of environmental issues in the region, observed during the meeting that the initial proposal for a parks authority did not garner support from members of the Atlanta City Council.

Other proposals in the report include:

Previous Article
Another Georgian caught in the slow-rolling aftermath of the Capitol riot
Next Article
Atlanta crime: ‘We’re all seeing something different that’s a little more frightening’