The piece of rock in question is Atlanta’s zero mile post. It is one foot square and 42 inches high. Today it stands as a relic inside Underground Atlanta (more specifically, inside the Georgia State University Security Office), but when the post was staked in 1837, it marked the southern boundary of a planned Western and Atlantic Railroad line from Chattanooga, Tennessee; it marked the future.

Around this stone grew a town called Terminus, i.e., “the end” in Latin. In 1843 Terminus changed its name to Marthasville. In 1845 Marthasville became Atlanta. You know the rest of the story: that Atlanta became a transportation hub, that it became a center of global commerce, that it attracted global talent and the eyes of the world. Atlanta United knows this stirring story, and so do its fans.

While Atlanta United is new to the city, soccer itself is not. According to the New Georgia Encyclopedia, amateurs “played in . . . Piedmont Park as early as 1912, and an amateur league played there in the 1920s and 1930s.” These teams were primarily composed of immigrants from the British Isles, who brought their love for the game with them.

Since that time, the popularity of soccer has expanded, thanks in part to an infusion of immigrants from soccer-loving countries and interest generated by Atlanta’s 1996 Olympic Games. Georgia now boasts more than a sampling of youth, college, amateur, and professional teams, among them the Atlanta Beat and the Atlanta Silverbacks.

Following years of planning and negotiations, on March 6, 2017, Atlanta United, a Major League Soccer franchise owned by Arthur Blank, made its highly anticipated debut in a sold-out match against the New York Red Bulls at Georgia Tech’s Bobby Dodd Stadium. Reportedly, the team drew the fourth-largest crowd in the world that weekend.

Sportswriters attribute supporters’ enthusiasm for the team to a variety of factors, such as novelty, timing, and owner Arthur Blank’s commitment to success. “The United have captured a local civic pride in a region that’s hungry for something to rally around,” wrote Will Leitch for the Chicago Tribune in an article entitled “What is Atlanta United doing so right that the [Chicago] Fire are doing so wrong?”

Leitch is on to something — Atlanta United is doing something very, very right and very, very interesting that has nothing to do with how the team is playing (though wins certainly don’t hurt).

Atlanta United is staking its claim on the city and its future here by staking a claim on the past. Consider the following from the team’s website: 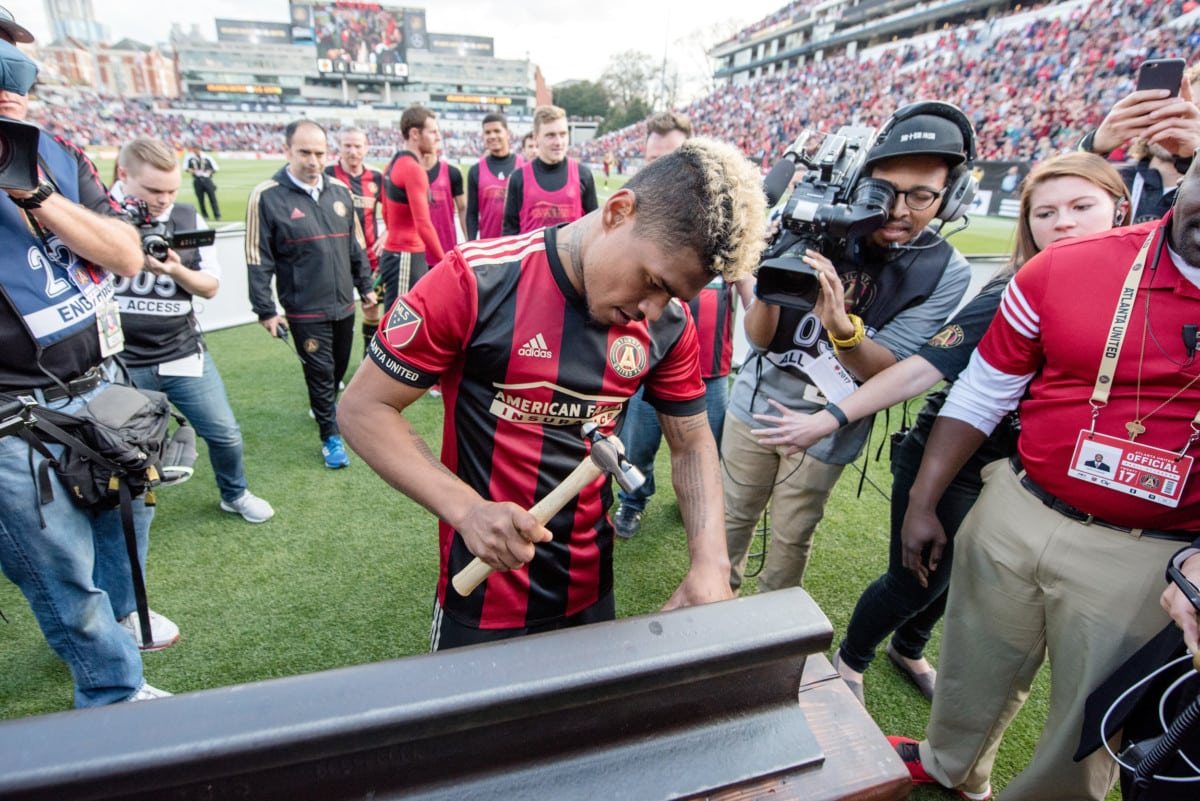 Atlanta United acknowledges the city’s railroad past, too, in a unique post-match ritual wherein the player of the game hammers a golden spike into a rail, “signifying the birth of a movement. The connection to the world. The unity of cultures, generations, and backgrounds.”

“Other cities have gone before us, but that doesn’t bother us. We will not wait any longer to stake our claim. Where history and progress intersect. Where the crossroads of culture, creativity, and commerce thrive,” the team claims. “At the spike, every strike rings true in our hearts. We unite around it.”

One need only look at the supporters’ groups and their missions for proof that the city has indeed rallied around the team and its golden spike. Two groups, Terminus Legion and Resurgence, take their names from Atlanta’s railroad past. Two others, Delta 17 and Footie Mob, acknowledge the city’s more recent points of pride: its diversity and contributions to arts and culture, respectively.

The adoption of Atlanta’s civic rhetoric by the team and its supporters’ groups is so seamless, so complete, so perfectly attuned to the new and exciting, the ancient and revered that one can’t help but wonder: what could any other city possibly have to offer as inspiring as what Atlanta has offered its team and fans? What other team could so cannily claim and utilize a history it never witnessed? What kind of future, other than one of passion and progress, could a team so firmly tethered to Atlanta have in store?

Who else but that great observer of our city, Ralph McGill, mid-20th century editor and publisher of the Atlanta Constitution, could have articulated so well the ongoing zeitgeist into which Atlanta United has tapped? In 1959, in a special edition of the paper honoring the arrival of Atlanta’s one millionth citizen, McGill wrote the following: “Atlanta honors the past, but it does not look backward nor cling to that past. It is a proud and intelligent city. And it moves confidently toward the future.” On and off the soccer pitch.

You can experience Hometown Teams: How Sports Shape America, a traveling Smithsonian exhibition sponsored by Georgia Humanities, at the Colquitt County Arts Center in Moultrie April 22 through June 3.

Previous Article
Georgia’s middle class is disappearing; GSU report can’t say where it’s going, or why
Next Article
In 6th District race, who exactly is us?