But even with federal aid, don’t look for the city to do much hiring or splashing out for at least the next 13 months, as the Covid Recession wallops the economy.

“Fiscal year 21 is shaping up to be one of the most challenging years the city has experienced and endured in quite a while,” said city of Atlanta CFO Roosevelt Council, presenting the mayor’s draft spending plan for the year that will begin July 1 to Atlanta City Council at the start of budget hearings last week.

The city would draw about $37 million from its rainy-day fund and take a one-time payment of about $17 million from an Eastside economic development fund under Bottoms’ plan. The budget also reflects spending cuts of about $40 million.

There’s no money in the budget for filling hundreds of jobs that are vacant now, or the ones that will become vacant naturally as people leave the city.

“We’ll be taking a much closer look at those positions that fall within the sworn [mainly police and fire] and the mission critical-category,” Interim Human Resources Commissioner Jeffrey Norman told City Council members. “But it is our intention, minus those exceptions, to move forward with abolishing those non-filled positions.”

There are 658 vacancies citywide; nearly 250 of those are in the police department, according to the city.

Spending on overtime continues to decline, from about $17 million this year to Bottoms’ proposal of about $14 million next year. Two years ago, overtime spending was nearly $28 million.

Each city department head will also be asked to develop plans to cut their budgets by five percent and  by 10 percent; and to include an analysis of what that reduction would do to public services, city COO Joshua Williams told City Council.

“The goal of this exercise,” Williams said, “is to have more thoughtful contingencies available to us should we need to reduce costs further later in the fiscal year or to support FY 22.” 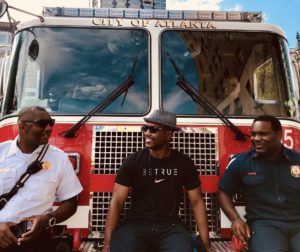 Atlanta firefighters — and police — are still on track for raises this year. Credit: Kelly Jordan

Spending is going up on employee retirement benefits that the city has to pay. But the draft budget also funds some political promises from both the mayor and Atlanta City Council: raises for police and firefighters, money for police body cameras, and money to start up a new office of city inspector general.

But a marquee plan to fund affordable housing by borrowing $200 million — or $100 million — is off at least for now. Maybe.

Atlanta is receiving about $88 million in federal aid that the Cares Act directed to the county’s most populous cities and counties to help pay for the costs of COVID-19. Bottoms’ proposal for that money includes grants for hospitals and other health care providers, grants to small businesses, city resident rental assistance and more. It would be spent across two fiscal years.

(The federal subsidy to the airport of about $339 million doesn’t make a difference to the city budget. The city owns the airport, and the airport does in the city’s budget book, but money collected at HJIA stays there to fund airport operations.)

Overall, Atlanta’s budget-writers are estimating a general fund revenue decline of about $58 million next year compared to the year that’s ending this June.

But they’re also still refining their models and watching tax figures come in, so numbers may change.

It’s hard to know how long people will stay away from Atlanta bars, hotels and malls or how long events and festivals stay cancelled. The fees and sales taxes from those things normally help fuel city “general fund” expenses from building inspectors and cops to pothole-filling and recreation center air conditioning.

It’s that drying-up of the economy and tax revenue that puts Atlanta and all cities in a tough place.

“We’re all trying to look into a crystal ball and see what this year is going to look like,” said City Council Finance Committee Chair Jennifer Ide on the first day of budget hearings.

Economic research readied before COVID-19 predicted sunny growth, with perhaps a few clouds on the horizon in the form of an oil price spike, trade war or a stock market decline.

But now, the city is looking at scenarios that have the economy dried up for between four and nine months.

So Atlanta, like every city, is scrambling to figure out the cost of the pandemic shock that’s actually happening.

It’s almost entirely certain it will take longer to restart the economy than it has to shut it down, Roosevelt Council said. But he also said most don’t believe that this is the start of another Great Depression, because of the federal policy response and because the economy was strong and sound before the pandemic.

But while the city finance department refines the numbers, Atlanta City Council will continue budget hearings and may make amendments to Bottoms’ proposal.

City Council’s Finance/Executive Committee has scheduled a budget vote on June 10; and full Council should consider the budget on June 15.

Budget hearing schedule — All meetings are live-streamed on Atlanta channel 26.

Previous Article
Rural Georgia at risk of falling behind amid philanthropic pandemic relief efforts
Next Article
A crowded summer calendar, as the nation struggles to get back to business