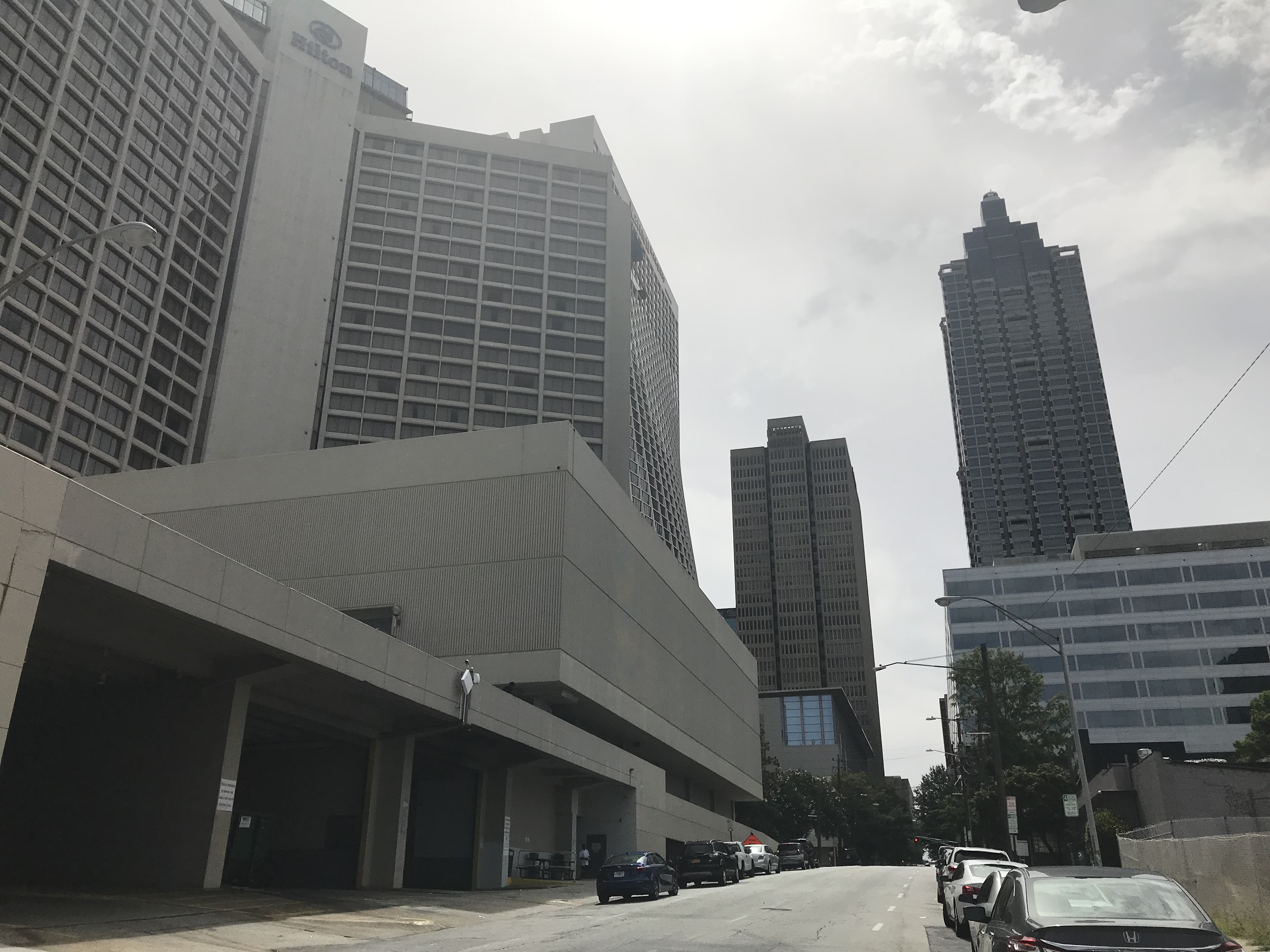 Transportation planners did not know the Hilton Atlanta handles 30 busloads of conventioneers almost simultaneously and they use the one-way Baker Street, in the foreground. The mayor has vetoed a plan that would had converted this portion of Baker Street from one-way to two-way travel. Credit: David Pendered
Share30
Tweet
Share
Pin
Pocket
WhatsApp
Buffer5
Email
Reddit
35 Shares

Transportation planners overlooked one aspect of Atlanta’s convention industry – the people who attend – and that evidently contributed to Mayor Keisha Lance Bottoms’ decision to halt the first step in a plan aimed at making Downtown more pleasant for pedestrians. In addition, the mayor ordered a review of the entire Downtown mobility plan by the city’s newly approved Transportation Department, which is to be functional by late 2020. 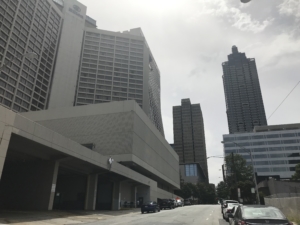 Transportation planners did not know the Hilton Atlanta handles 30 busloads of conventioneers almost simultaneously and they use the one-way Baker Street, in the foreground. The mayor has vetoed a plan that would had converted this portion of Baker Street from one-way to two-way travel. Credit: David Pendered

The transportation plan didn’t account for the 30 buses packed with conventioneers that simultaneously land at, or leave from, the Hilton Atlanta hotel. Planners didn’t know that many buses traveled at once, Josh Rowan, head of Renew Atlanta/TSPLOST, told the Atlanta City Council’s Transportation Committee.

The Hyatt Regency Atlanta and Atlanta Marriott Marquis have joined the Hilton in raising mobility concerns about the Downtown plan; all concerns are to be addressed, Rowan said. Likewise, the American Cancer Society and residents of Museum Tower are to be brought into the conversation, he said.

Rowan said city officials also intend to review, “how future developments Downtown … would interact with one another.” This likely is to include a fresh look at growth projections used to devise the new traffic patterns for Downtown. For starters, the plan calls for about 12,000 additional persons to reside in about 20,000 new homes that are to be built by 2030.

The next day, the mayor released a statement explaining her decision to veto the council’s vote to approve the administration’s request to convert Baker Street from one-way to two-way. The city was to pay $1.3 million of the projected $2.7 million cost of converting 0.57 miles of Baker Street.

The conversion is part of a much broader mobility plan, Downtown Atlanta Transportation Plan, for the Downtown area that was sponsored by Central Atlanta Progress and its affiliate, Atlanta Downtown Improvement District; Atlanta Regional Commission, and Georgia Department of Transportation.

The plan calls for converting a total of 6.7 miles of Downtown streets from one-way to two-way roads. 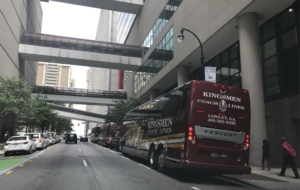 Concerns expressed by Hyatt Regency Atlanta will be easiest to address, Rowan said. The Atlanta Marriott Marquis also has loading problems, though Rowan didn’t characterize the ease of a solution.

“The Hilton is the most technical one,” Rowan said.

This is how Rowan described the situation a the Hilton:

In handing the matter over to the city’s future DOT, the mayor ensured the discussions over the Downtown mobility plan could continue for up to 18 months. The city’s DOT is to be functional by late 2020, according to legislation the council approved June 17.

According to the legislation, six functions have been assigned to the DOT, with the sixth providing a degree of latitude for it to take on additional responsibilities:

Previous Article
Vine City Peace Park – Much more than a name: A place to study war no more
Next Article
‘Midsommar’ – a deeply unsettling horror movie