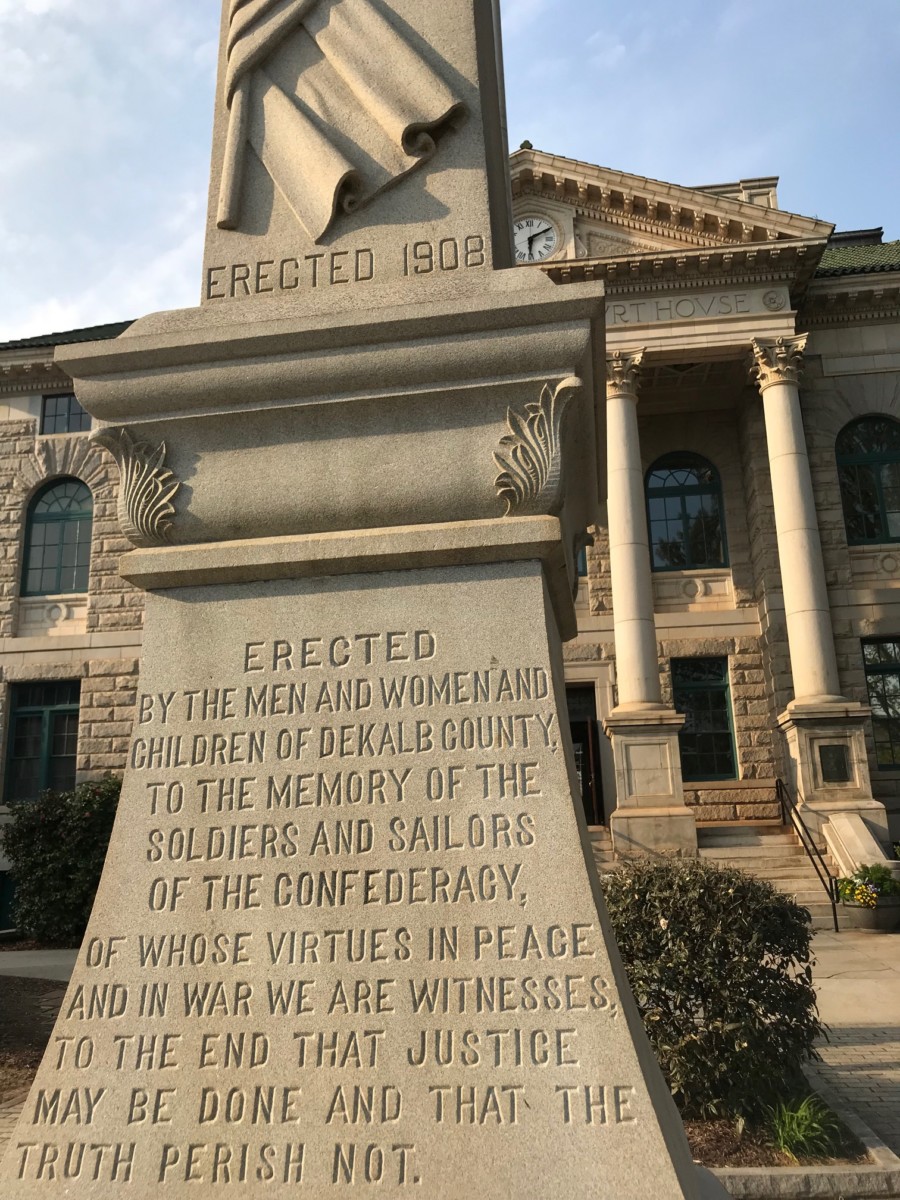 Decatur's Confederate monument, which neither the city nor DeKalb County wants. But state law protects it from easy removal. Credit: Kelly Jordan.

Georgia’s state Legislature has OK’d triple damages for vandalizing plaques, statues, markers and so on, under a bill that one opponent called an attempt to suppress debate about public monuments to the Confederacy.

Left behind is a bill that would’ve helped Decatur and DeKalb, where folks have already debated — and resolved that they don’t want the giant Confederate obelisk that’s in the heart of the county seat. 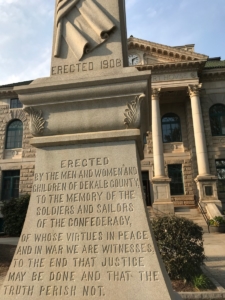 Decatur’s Confederate monument, which neither the city nor DeKalb County wants. But state law protects it from easy removal. Credit: Kelly Jordan.

With the majority Republicans in strong support, Georgia’s state House and Senate approved a bill that would make monument vandals liable to pay three times the cost of monument cleanup or repairs; and face the possibility of paying court costs. The bill now sits on Gov. Brian Kemp’s desk.

“We’re living in a society today, that it seems to be OK in a lot of quarters, to vandalize this property. That’s wrong,” said state Rep. Alan Powell, R-Hartwell, House sponsor of Senate Bill 77.

Powell repeated that his bill is about “all monuments,” as he showed photos of all kinds of monuments covered in vandals’ paint.

But it’s Confederate monuments that arouse disgust in a way others don’t.

It’s the name “Confederate” that Atlanta has recently removed from two streets.

And it’s a 30-foot-tall Confederate obelisk in Decatur that DeKalb owns and both want to get rid of.  But the county’s so far found no takers who would or could display it in a similarly prominent place, as required by state law.

And it’s Confederate monuments that opponents of SB 77 verbally attacked from the state House floor on Thursday.

Remembering the Civil War is a historical necessity but it can be done in an appropriate or even educational manner, said state Rep. CaMia Hobson, D-Albany.

But any monument to honor those who fought against freedom and the Constitution to preserve the use of slaves for their own personal gain should be removed from communities that don’t want those markers, she said.

“The time for celebrating oppression with the shrines of enslavement is over,” Hobson said.

State Rep. Angelika Kausche, D-Johns Creek, said the purpose of SB 77 is to silence the debate surrounding the mortality of Confederate monuments in public spaces.

She said she grew up in Germany at a time when that country was starting to grapple with the atrocities of its Nazi past.

“Every family had a family member who was either a culprit or a victim … the only way to move forward was to confront our past in its raw and painful reality,” Kausche said.

Germany has many solemn and dark reminders of Nazi-era atrocities, like memorials at concentration camps. But, she said, it has no monuments celebrating Nazism or militarism.

Tearing down those celebratory monuments, she said, was a necessary first step to acknowledge responsibility for the steps that ended in such hate.

“Colleagues, our first step is long due,” Kausche said to fellow House members.

But Marietta Republican state Rep. Sharon Cooper spoke up for the bill. She said it’s important to remember history, both good and bad; and she said young people aren’t being taught history.

“I see the statues and the monuments … as moments and reasons to teach what has happened to us and why we should not be that way,” Cooper said.

Powell called on legislators to respect previous generations and people died for what ever reason they did, in the case of military monuments.

Earlier this year, a bill from Decatur’s state Senator would’ve paved the way for the monument to go, but Elena Parent’s Senate Bill 51 got only one committee hearing and no vote. It would have allowed local governments to decide if they want to remove publicly owned monuments.

So now, Parent doesn’t think DeKalb will be able to remove the Confederate monument anytime soon.

But the county is putting up an explanation of it. As written, SB 77 would have banned installing new interpretive markers by old monuments, but Parent got an amendment to continue to give public space for a little bit of background.

That’s important because “it will give context about those eras, the Civil War Era, the Jim Crow Era,” Parent said.

DeKalb has already drafted language for a plaque explaining the history of the obelisk and why it was put up about 40 years after the Civil War ended, and squarely in front of what was then the working courthouse.

The plaque is set to read, in part, “This monument and similar ones also were created to intimidate African Americans and limit their full participation in social and political life of their communities.”

Previous Article
Atlanta to Host First Ever Smart City Expo in the U.S.
Next Article
Meters and meters of art by Kelly Jordan