The race for Atlanta City Council between incumbent Michael Julian Bond and challenger Courtney English has attracted thousands of dollars in donations and now some well-known supporters.

Former Atlanta Mayor Shirley Franklin stood on the steps of City Hall Thursday and endorsed English for the at large seat. He is now chair of the Atlanta Board of Education.

She said that she has seen him make tough decisions that are better for Atlanta’s children. Franklin said English can be trusted, and that he has stamina, courage and vision.

Bond is not lacking for high-profile fans: Next week, at the Commerce Club, former Gov. Roy Barnes is listed among the hosts of a fundraising reception to honor the councilman — with tickets ranging from $101 to $2,500. The other hosts are Sheriff Ted Jackson, Mayor Kasim Reed and Ambassador Andrew Young.

Reed’s office did not respond to a request for comment made Wednesday. Barnes was not immediately reachable by phone at his office on Thursday.

But as an incumbent, Bond can roll over donations unspent in previous campaigns. Bond reported $18,357.69 cash on hand as of June 30.

Bond and English got heated with each other during a candidate forum organized by Georgia Stand-Up on Sept. 7.

In response to a question about how city government can help students succeed and help create equity in the city overall, English said the schools find themselves doing things that aren’t their in their bailiwick, like providing meals, glasses, on-campus clinics and looking into setting up affordable housing on vacant APS property “because the city hasn’t got that job done.” 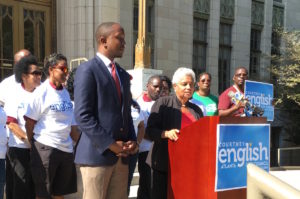 Bond charged that the schools have created a school police force that “nobody asked for,” among other charges. He also said that APS has failed children, and called the 71 percent graduation rate cited by English “inflated.”

In a back-and-forth exchange, Bond finished  with remarks that went over the allotted time by saying that English “doesn’t know what he’s talking about.”

When the two men sat down after the question, Bond leaned close to English and said something inaudible to the audience. The moderator  ended up separating the two.

(Video is available on Georgia Stand-Up’s Facebook page from Sept. 7.  Bond and English appear about 20 minutes into the video.)

There are 14 competitive races for Atlanta City Council this year and more than 60 candidates.

Early voting begins in certain locations on Oct. 16. The election is on Nov. 7.