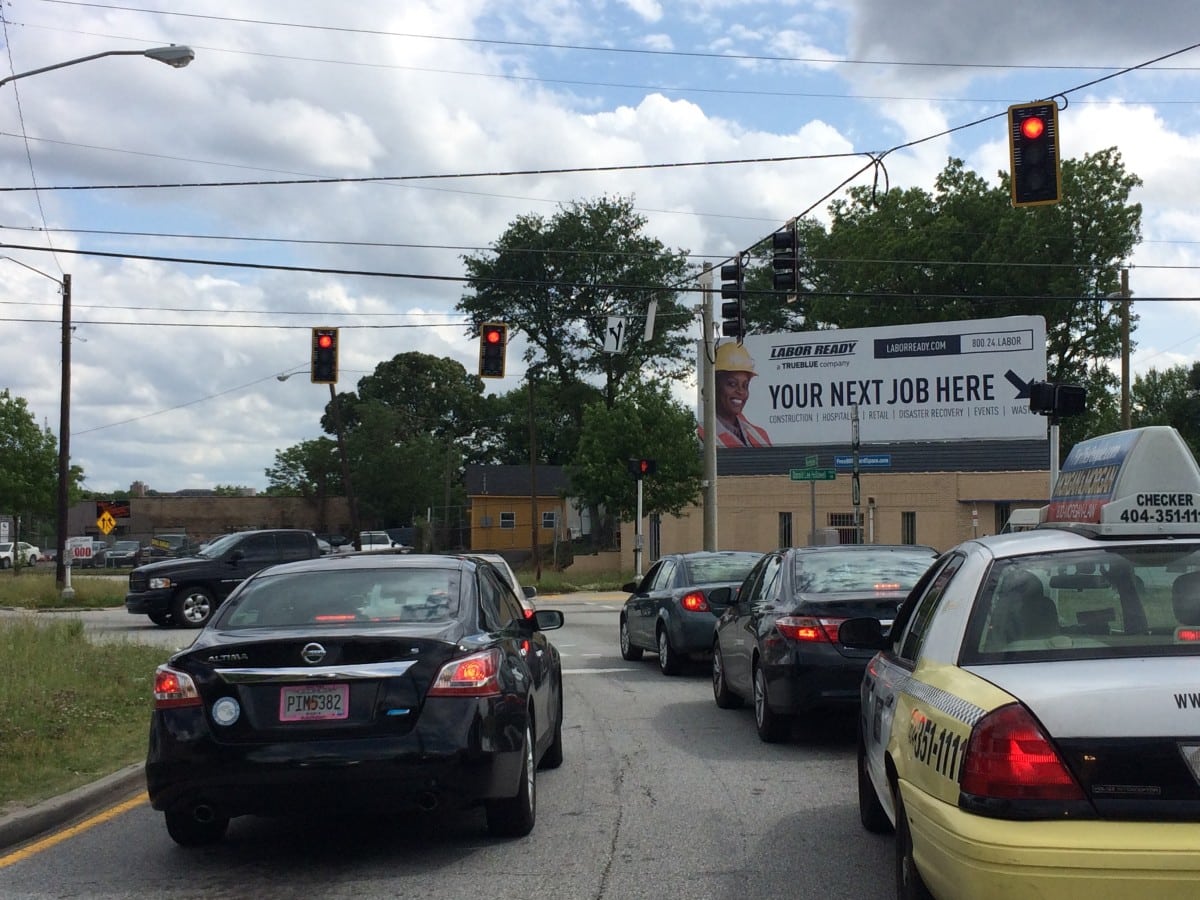 A comprehensive study of Northside Drive is being conducted by the Georgia Department of Transportation. The segment between I-75 and I-20 includes this busy intersection, at Donald Lee Hollowell Parkway. Credit: David Pendered
Share19
Tweet
Share4
Pin
Pocket
WhatsApp
Buffer
Email
Reddit
23 Shares

Editor’s note: This story is updated with data GDOT provided about the I-20 interchange soon after the original story posted.

Northside Drive from I-75 to I-20 is the subject of a comprehensive state study into ways to reshape it to meet travel needs of the next two decades – plans that once suggested redoing the interchange at I-20 and still have MARTA buses serving the corridor. 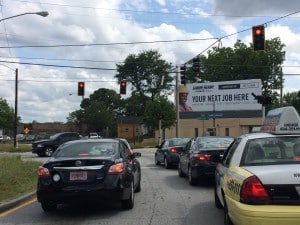 A host of principles are on the table and none come as a surprise. Four cited by the Georgia Department of Transportation in a fact sheet dated March 15 are:

In recent weeks, civic leaders have raised concerns about the notion of redoing the I-20 interchange. They say it will result in traffic overwhelming their communities.

In response, GDOT has reduced the scope of work in the days since GDOT updated the project in a fact sheet dated March 15, a spokeswoman said Monday evening. The proposal to redo the intersection is now off the table.

Civic leaders have raised concerns that the true motive of the proposed redo of the intersection is not to help struggling West End, but to improve access to the Mercedes-Benz Stadium.

Some say the neighborhood would be overwhelmed by fans traveling to Falcons football games, in the autumn-to-winter season, and to the Atlanta United soccer team games in the season that stretches from March to October.

The stadium is about a mile north of I-20 and abuts Northside Drive. I-20 would be a convenient way to drive to the stadium – if the intersection were reconfigured to improve traffic flow.

The Northside Drive corridor project originally stretched from I-75 to I-20, according to GDOT’s fact sheet. It included a potential remake of the interchange at the intersection of I-20 and Northside Drive and Lee Street, the gateway to the Atlanta University Center and Downtown Atlanta.

Now the project stretches from I-75 to, “just before I-20,” GDOT spokeswoman Annalysce Baker said in an email sent soon after this story was posted. Baker’s note serves as an update to the March 15 fact sheet.

“The department is no longer considering the interchange at I-20 and Northside Drive,” Baker wrote. “We are just focused on the corridor from the I-75 interchange to just before I-20.”

The idea that was eliminated was first mentioned in 2013 in a plan created with GDOT funding by Georgia Tech students. It called for adjusting the routing of Northside Drive and Lee Street at I-20 in order to improve the linkage between West End, located to the south of I-20, and the Atlanta University Center and Downtown Atlanta, on the north side of I-20. The stated goal was to weave together a community disrupted by the introduction of I-20.

This controversy aside, GDOT completed in April the first round of meetings with community leaders. The volunteers were nominated by area residents to tell GDOT officials their preferences for renovating a five-mile segment of the roadway, said GDOT spokesperson Annalysce Baker.

For purposes of the study, the corridor was divided into four segments and each volunteer represented one of the four segments. Groups ranged from 20 to 25 volunteers.

“They met for two hours and gave input about what problems they have with Northside Drive and to say what they would like to see on Northside Drive, what improvements they want to see made,” Baker said.

“We also asked them to tell us what they want Northside Drive to look like 20 years from now,” Baker said. “That’s an important question. We build for 20 years out.” 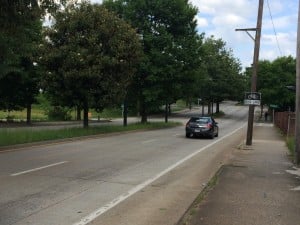 This tree-lined median, bike lanes and sidewalks were installed on Ralph David Abernathy Boulevard west of its intersection with Northside Drive. This type of project could be considered for a portion of Northside Drive. Credit: David Pendered

State engineers are in the process of reviewing the citizens’ recommendations. Around the end of summer, GDOT will reconvene the volunteers to review the proposals generated by GDOT engineers. The process will be opened to the general public after GDOT tweaks plans based on comments gathered in the second round of meetings, possibly late this year.

GDOT has participated in numerous studies of Northside Drive over the years. Most recently, in 2013, GDOT helped pay for a studio of Georgia Tech students who evaluated the corridor under the guidance of Mike Dobbins, a Tech professor of the practice and former Atlanta planning commissioner.

These studies will be incorporated into the current analysis and one of Tech’s recommendations – a reconfiguration of the interchange at Northside Drive and I-20 – is part of the mix being reviewed by state engineers.

One issue that periodically arises is that MARTA buses do not serve this section of the Northside Drive corridor. 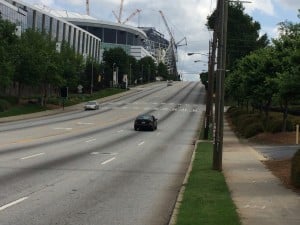 Looking south along Northside Drive, toward the Mercedes-Benz Stadium, shows a five-lane road with a dedicated turn lane, with few places to turn into, and two sidewalks. Credit: David Pendered

There’s nothing on Northside Drive comparable to MARTA’s Route 110, which travels from Phipps Plaza in Buckhead to the Five Points Station. Northside Drive still doesn’t have the dense developments of the Peachtree corridor, but it is home to a growing number of apartment buildings and restaurants – the very type of shifts a 20-year transportation plan is to contemplate.

Previous Article
Heroes, dogs, and the wet nose of justice
Next Article
Could Trump make Georgia competitive in November?