Metro Atlanta’s new transit agency is recommending Georgia borrow at least some of the money it would take to build nine priority transit projects.

The list amounts to an official assessment of the projects that would do the best service for metro Atlanta at the best price.

The projects range from huge projects like high-capacity bus service on the north and east Perimeter to itty bitty ones, like traffic signals that would give buses priority in part of Cobb County.

Now it remains to be seen if the state will do anything with this list.

The priciest items that The Atlanta-Region Transit Link Authority recommends get some state funding are MARTA station rehabilitation and high-capacity bus service along the north and east sides of the Perimeter. The total price tag for each of those is in the upper $600-millions.

By price, the list goes all the way down to $500,000 project for those Cobb traffic signals.

The ATL didn’t make any recommendation on what any state share of the cost of these projects should be; it simply listed the total cost of each project.  It would be up to the Georgia legislature to decide what sum, if any, it wants to borrow for any of the projects.

Other sources of money would include the usual transit funders of metro Atlanta transit: the federal government, local sales taxes and fares.

The projects on the list would take between three and 12 years to finish.

Georgia has historically been reluctant to spend money on metro Atlanta transit. But its creation of The ATL in 2018 is a sign of some interest in the state Capitol for the buses and trains that surround it. 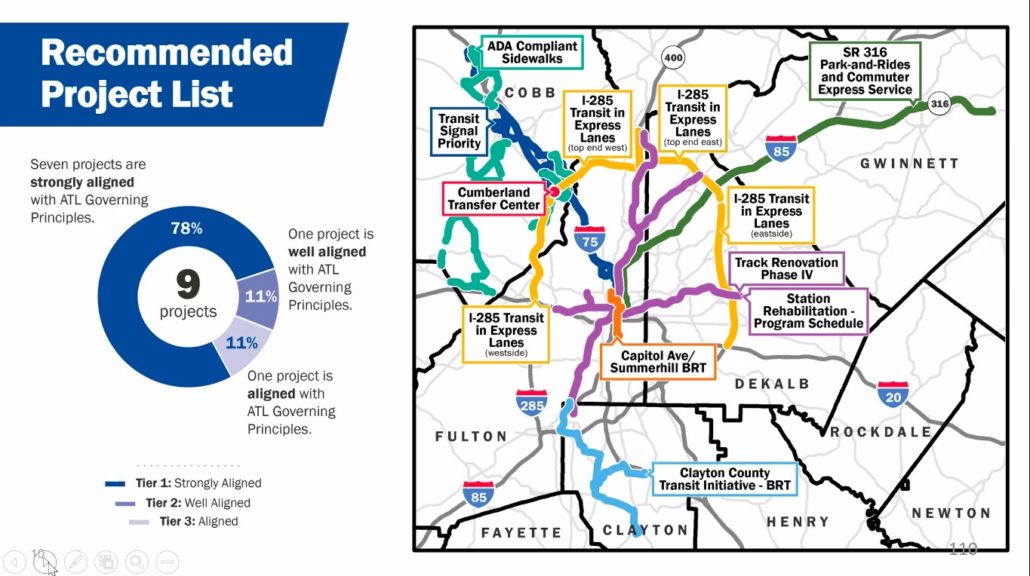 The ATL’s executive director, Chris Tomlinson, said that his agency will work with the office of Gov. Brian Kemp and the Georgia legislature in the coming months to see what level of funding might be made available toward the nine projects.

One of the agency’s jobs is to list and prioritize the different transit projects of regional impact that counties and groups of counties want to see done, and to recommend the top ones to the state for possible funding.

The nine projects would “move the needle,” Tomlinson said.

The agency’s board unanimously approved the list in a Thursday morning vote.

The ATL considered projects from all across the 13-county metro Atlanta region before choosing these nine. The agency looked at whether projects do things like connect job centers, cut down on use of single-occupancy vehicles, provide a good return on investment, serve underserved communities and several other governing principles.

The Georgia legislature next meets in January, and negotiations on bond spending usually start coming up after a month or so after that.

Georgia has a good credit rating and so can borrow cheaply.

But on the other hand, it has historically spent little on metro Atlanta transit . A $75 million bond approved in 2015 for transit projects statewide was a bit of a milestone, as was a $100 million state bond in 2018 marked for Ga. 400 rapid bus service. Other than that, state funding for public transit has been limited mainly to the commuter Xpress bus system. 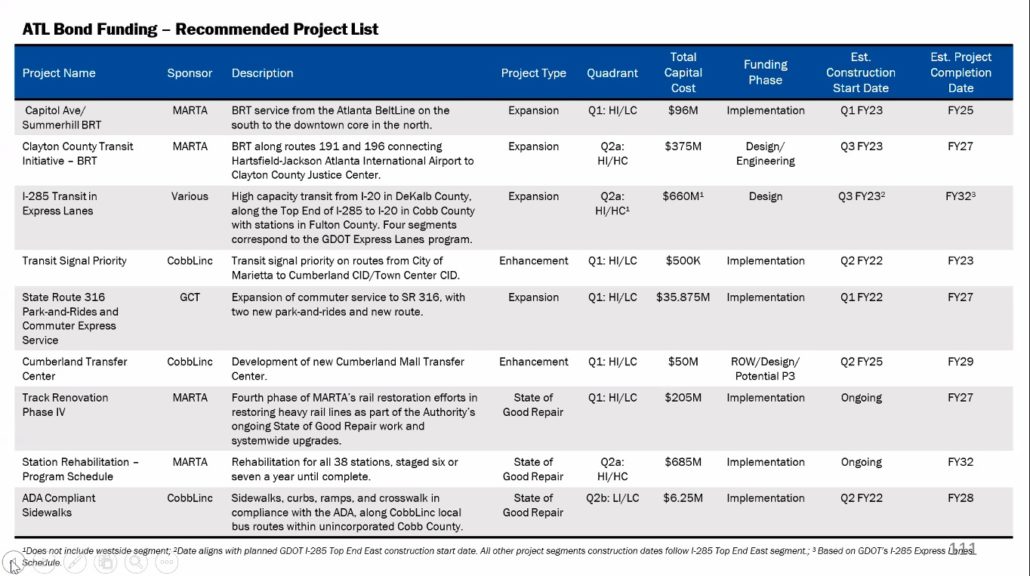