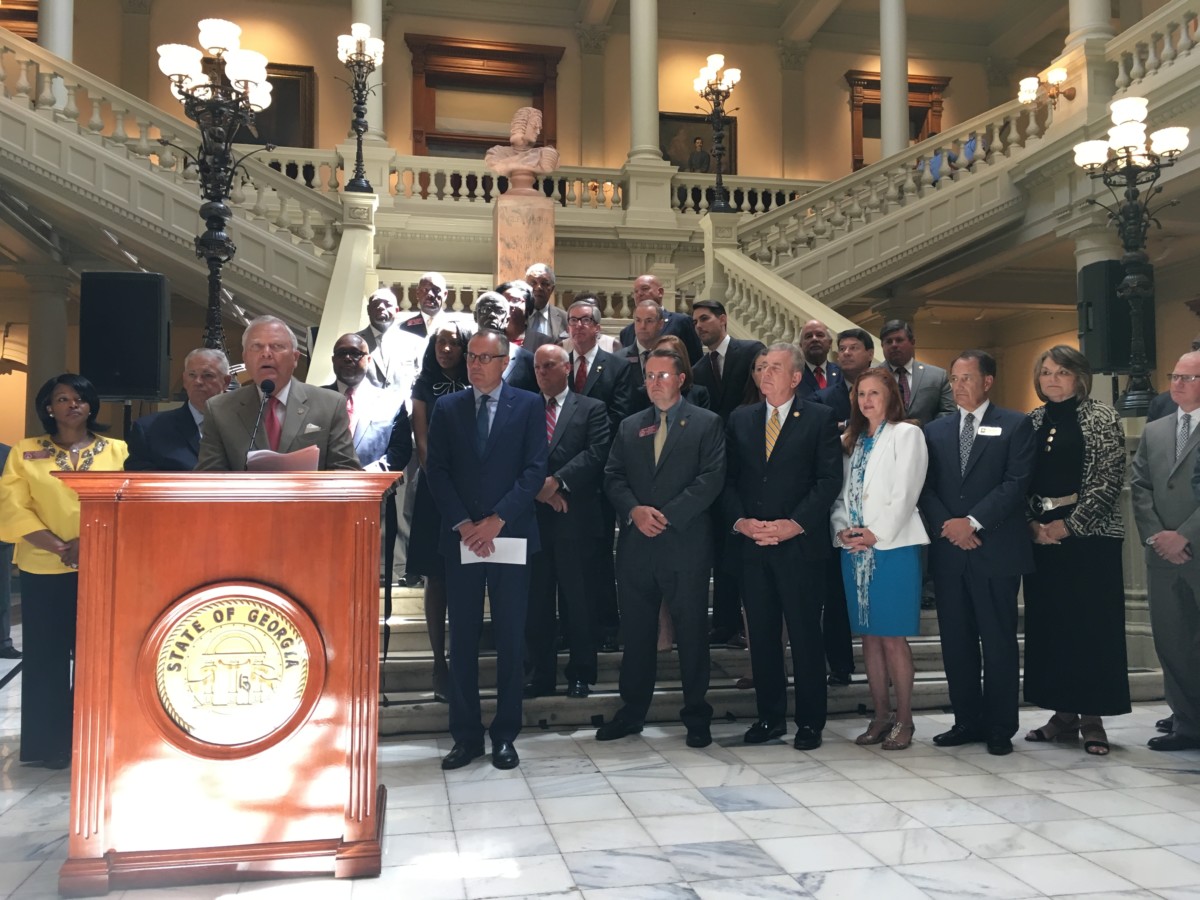 A state that’s been reluctant to bankroll buses and the train in its biggest metro has announced a major mass transit spend by Georgia standards — $100 million. That’ll be a substantial downpayment on rapid bus service along Ga. 400. 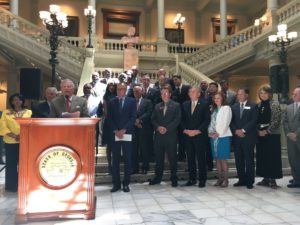 The decision to spend the state’s fiscal year 2019 transit bond on that single project was based on need, according to Georgia Gov. Nathan Deal, who announced the decision at a state Capitol press conference on Tuesday.

“We think that it is the best place for us to spend it in the short term,” he said.

Deal said that 400 is one of the most utilized corridors in the region and that freight traffic there is expected to almost double in the next 20 years.

Deal was surrounded by state lawmakers, folks from state agencies, but also officials from Fulton County and its cities.

What’s planned is “bus rapid transit:” buses that will travel in the new express lanes being planned along Ga. 400 between Interstate 285 and McFarland Parkway. So the buses will mix with cars.

“Its a much different situation than what you are probably used to in Atlanta because traffic will be flowing very, very well in those lanes,” said Georgia Department of Transportation Commissioner Russell McMurry on Tuesday.

McMurry said the express lanes are a $1.8 billion dollar project.

The bus service will come with expenses on top of that, like land acquisition and buildings for bus stops. So putting in cash now means all that can be laid out and built at the same time as the rest of the express lane infrastructure.

McMurry said the $100 million is a substantial downpayment on what he called the starter set of bus rapid transit. “We’re able to build four transit interchanges along the corridor which will work collaboratively with Fulton County and MARTA in those locations. And we will also be able to build 400 such that we don’t preclude future transit stations as well,” McMurry said.

He said land acquisition will start in the next budget year, which starts in July.

Deal said the corridor is vital to commuters, job creators and freight.

There’s no doubt the traffic is bad — and the voters there have some representatives who hear a lot about it. North Fulton is the home grounds of Senate Transportation Committee Chairman Brandon Beach, who also used to be president and CEO of the Greater North Fulton Chamber of Commerce. It’s also home to Liz Hausmann, a Fulton County Commissioner who’s been among the most active of her colleagues in working toward putting together a referendum on a new transit sales tax. 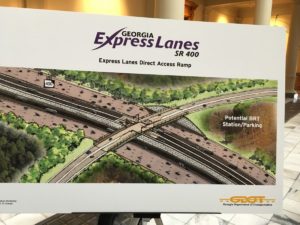 A state sketch showing the express lanes planned for Georgia 400. For a fee, drivers will be able to get into a separate lane of traffic. Parking for bus customers would also be along the highway. Credit: Maggie Lee

But bus rapid transit in north Fulton is hardly the only transit project on the wish lists of various parts of metro Atlanta and Georgia. Fulton’s mayors and commissioners themselves have been discussing asking voters for a sales tax to pay for BRT in both north and south Fulton, for example.

Union City Mayor Vince Williams has been on the record calling for equity in transit spending — spending in both north and south — if there’s a transit sales tax in Fulton.

But he was among the elected leaders standing on the state Capitol stairs, backing up Deal.

Williams said the spending will benefit the entire region and said it’s a thing to celebrate.

“This is the beginning of something great for all of Georgia,” said Williams. “Certainly what takes place on the north side … channels down to the south side.”

Asked what his message to south Fulton voters is, Fulton County Commission Chair Robb Pitts said the $100 million is just the start of the process

“We’re all in agreement we had to start somewhere and these are the more shovel-ready projects,” said Pitts.

Fulton county may yet ask its voters for a sales tax to pay for more transit — maybe that BRT on Highway 29 or South Fulton Parkway. But time is running out to put the question on ballots this year; next year might be a better bet.

This $100 million state spend comes a few years after a $75 million transit bond that bankrolled projects for several systems, including MARTA. Aside from those bonds, the state’s spending on transit has been pretty much limited to the Georgia Regional Transportation Authority, operator of Xpress regional buses, at something near $13 million for the last few budget years.

Georgia might be moving in the direction of regular, bigger transit spends.

Leading lawmakers have promised a focus next year on transit in rural Georgia — systems that can be as modest as buses available by appointment for rides to the doctor or the store.

A rural bill would be the sequel to a bill this year that put 13 metro counties at one table under the name of the “Atlanta-region Transit Link.” At “The ATL,” the counties will coordinate their transit plans.

Georgia House Speaker David Ralston, R-Blue Ridge, was a key backer of the metro bill and has been vocal about focusing on rural transit in 2019.

“I think that we all recognize this is the beginning of a process,” Ralston said.

Previous Article
This Summer, Get Your Art from the Great Outdoors
Next Article
Ebenezer and partners bail out 10, for start of campaign