Georgia’s fledgling oyster industry is being propelled by a group of public and private interests that want more table-ready oysters to be harvested from Georgia’s coastline.

Georgia lawmakers and scientists see the potential for economic development in blighted coastal communities that harvest oysters. Restaurateurs envision increased sales. The Nature Conservancy portrays oyster farms as a way to cleanse coastal waters because the bivalves are natural filters. 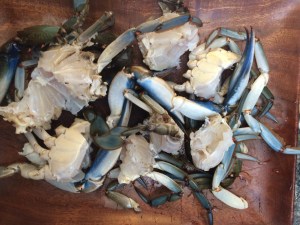 Oysters could approach crabs in value as a seafood landing in Georgia. (Photo by David Pendered.)

This collective push could result in meaningful steps being taken in 2023 to advance a potentially lucrative industry.

Virginia’s oyster landings reached $40 million in 2019, and this dockside value would increase as oysters are prepared, packaged and sold to customers. Alabama’s landings of about $1 million a year are a more apt comparison to Georgia’s potential, Tom Bliss, director of the Shellfish Research Lab, Marine Extension and Georgia Sea Grant Office, said at a Dec. 8, 2021 meeting of the House Rural Development Council.

The industry was supposed to be farther along by now.

The Legislature passed House Bill 501 in 2019 to enable the commercial oyster sector to expand. Then the pandemic arrived. With the crash in restaurant trade came a collapse of interest among potential oyster farmers to take on a new risk. Plans to promote the opening of commercial oyster hatcheries are behind schedule, though the state continues to operate its facility.

New signs of life in the industry have emerged. Two significant signs that state officials intend to reenergize the oyster industry emerged from the council meeting.

The first is the council’s non-binding recommendation to state environmental officials and scientists: “Encourage the Department of Natural Resources (DNR) and the University of Georgia Marine Extension and Georgia Sea Grant Office to continue gathering information related to the state’s oyster hatchery rules, regulations, and laws. Request that DNR and the UGA Marine Extension and Georgia Sea Grant Office return to the Rural Development Council during the fall of 2022 with comprehensive legislative recommendations to increase economic opportunities in the oyster industry while continuing to meet obligations to ensure public health standards.”

The second sign is the response to lawmakers from DNR and UGA officials. They concurred that they can meet the deadline to submit a wish list of legislation to promote the oyster industry.

Amidst all this promoting, a top DNR official said the state remains focused on protecting public health.

Oysters can be a health risk. They must be handled properly, from extraction from the water to a processing facility, from packaged product to transport to presentation on the table. The Vibrio bacteria that can be transmitted by oysters can cause stomach woes or worse.

The threat to public health posed by this bacteria is the reason Georgia won’t permit oyster harvesting in summer months. Georgia will restrict harvests to cooler weather until the industry proves its capacity to harvest and keep them properly chilled during transport, Doug Haymans, director of the Georgia Department of Natural Resources’ Coastal, told the council.

“We are trying to keep the consumer safe while building a successful industry,” Haymans said.

Another sign is a quiet campaign intended to remind that Georgia has a legacy in the commercial production of oysters. The state once was the sole source of oysters for the Campbell Soup Co. and other providers.

This bit of history is in the first question in a new survey by UGA’s Carl Vinson Institute of Government. The survey observes: “Georgia has expansive wild oyster populations and once led the nation in harvesting wild oysters for canning. The canned oyster industry in Georgia had all but died out by the 1950s, significantly limiting the harvest of wild oysters.”

The Georgia Restaurant Association disseminated the survey among its members this month at the behest of the Carl Vinson Institute. GRA President Karen Bremmer said Monday she’s been told the response has shown overwhelming response from restaurateurs who responded that customers want Georgia-grown oysters. The association supported the 2019 law.

“We’re very pleased with the forward progress,” Bremmer said Monday. “This is definitely something our restaurateurs want, in light of farm-to-table and serving and preparing food from our state.”

Previous Article
We must all work together to keep the American Dream alive
Next Article
Minority undercount in census will likely lead to lower political representation, big federal funding losses