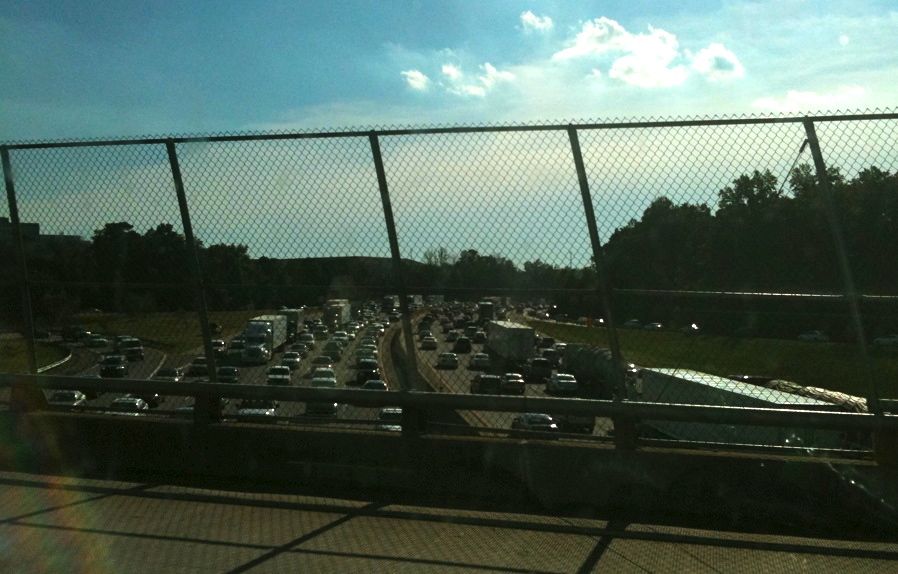 The reconstruction of the I-285/Ga. 400 interchange is intended to ease congestion and improve safety of both roads. This traffic congestion is eastbound on I-285, seen from Ga. 400. File/Credit: David Pendered
Share8
Tweet5
Share2
Pin
Pocket
WhatsApp
Buffer
Email
Reddit
15 Shares

MARTA and the Georgia Department of Transportation are advancing efforts to improve mobility around the I-285/Ga. 400 interchange and northward along Ga. 400. 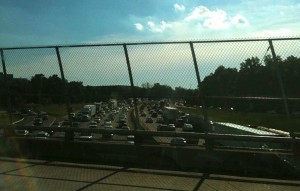 All told, the planned transit and highway projects represent investments of more than $3 billion. They intend to address gridlock in an area that is both the state’s most traffic congested regions, and one of Georgia’s major locales for economic growth and development.

This Saturday, Oct. 10, MARTA is scheduled to provide an update on its plans to extend service from the North Springs Station to Windward Parkway. MARTA planners and staff plan to discuss the status of the Connect 400 plan at the 11th annual Center for Pan Asian Community Services Tea Walk, in Chamblee.

Early estimates put the cost of transit expansion in this region above $2 billion.

MARTA staffers will be available from 9 a.m. to 1 p.m. to discuss the plan. They are to be located at CPACS offices at 3510 Shallowford Road, NE.

MARTA’s board of directors voted this year to authorize the evaluation of three alternatives to increase transit service in the corridor along Ga. 400. MARTA planners are evaluating a heavy rail system, which to date is the locally preferred alternative. It would begin at the North Springs Station, cross to the west side of Ga. 400 south of Spalding Drive, and cross Ga. 400 again at a point somewhere north of the Chattahoochee River. Planners have not yet determined where the rail line would cross the river.

Two other alternatives are bus rapid transit. BRT is a system that uses rubber tire buses that operate in restricted lanes, so as to avoid traffic congestion, or on open lanes of travel. 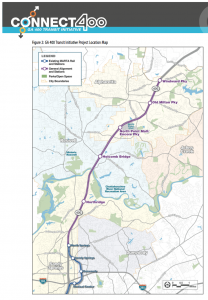 MARTA is evaluating the possibility of expanding heavy rail or BRT service in the Ga. 400 corridor north from the North Springs Station to Windward Parkway. Credit: MARTA

One BRT route would follow the same alignment as the rail. The other would operate in the managed lanes GDOT intends to build along Ga. 400.

The next step involves the public display of executive summaries from each of the four proposals, and two public meetings – Oct. 20 in Sandy Springs, and Oct. 22 in Dunwoody. These meetings won’t include a formal presentation, which means the public can drop in and visit at any time during the scheduled hours – from 11 a.m. to 1 p.m., and from 5 p.m. to 7 p.m.

The Oct. 22 meeting is schedule for the Dunwoody Baptist Church Chapel, Building E. The church is located at 1445 Mt. Vernon Road.

GDOT plans to review the four proposals and, in December, present GDOT’s board with an assessment and recommendation for best value proposal, and the recommended developer team.

“We are excited to be able to move this priority project forward on the targeted schedule and are eager to review the solutions these teams have captured in their proposals,” said GDOT Commissioner Russell McMurry said in a statement. “Our shortlist contains four well-qualified teams, and we look forward to selecting the one that will bring the overall best value to Georgia travelers and commuters in an area that is critical to Georgia’s economy.”