MARTA's map of the proposed route of Clifton Corridor Alternative 1A, a bus rapid transit line. It is one of three alternatives remaining under study, along with another bus option and a light rail line.

MARTA’s alternatives for the Clifton Corridor transit line are down to three options – two bus routes and one light-rail line – all with Avondale Station as the main eastern terminus.

One of the bus rapid transit (BRT) options also includes a spur bus route to Decatur Station. All three options continue to have Buckhead’s Lindbergh Center Station as the western terminus, connecting the route to the Gold and Red heavy-rail lines. They all use a similar route along the CSX railroad right-of-way and local streets.

The alternatives are scheduled to be unveiled to the general public in community meetings on Nov. 15 and 17. The transit agency provided SaportaReport with a private preview of the presentation before the public meetings. Large institutions along the proposed routes, such as Emory University, have already seen the alternatives as well. Betty Willis, Emory’s senior associate vice president of government and community affairs, said in a written statement that the university is staying open-minded.

“Emory strongly supports the alternative to the Avondale MARTA Station and is open to either light rail or bus rapid transit,” said Willis. “Either mode provides the transit access we have needed for so long to provide our staff, students, patients and visitors the ability to directly connect into the MARTA system.”

All of the routes are now drawn with gray boxes on the map indicating uncertainty of how exactly they would connect with the terminus stations, an issue MARTA continues to study.

Lindbergh is intended to be a major connection point for future Atlanta BeltLine transit, which is also in a study phase, and the Clifton Corridor project is likely to be built first. Bryan Hobbs, MARTA’s Clifton Corridor project manager, acknowledged that could make the project dictate the route or mode – or both – of BeltLine transit as well, though he emphasized it is being planned independently.

All alternatives include a separate but interconnected shuttle van service to the Atlanta Veterans Affairs Medical Center on Clairmont Road about a half-mile from the Clifton Corridor route. MARTA would operate the shuttle. From MARTA’s planning perspective, that is intended to boost the Clifton Corridor’s ridership and thus its viability.

Potential ridership remains a key unanswered question, as MARTA says it is still working on updated numbers in the wake of the COVID-19 pandemic, which wreaked dramatic and lasting changes to commuting patterns. However, there seems to be little doubt that the line would have high demand from the many large institutions along the route, such as Emory, the U.S. Centers for Disease Control and Prevention, the Children’s Healthcare of Atlanta’s Egleston Hospital and Emory Decatur Hospital. Hobbs said a pre-pandemic projection was a daily ridership of 22,000 or more.

Cost projections are also not yet updated, with new numbers expected in January. Earlier this year, MARTA estimated the capital costs for BRT as $670 million to $860 million and light rail as $2.1 billion to $3.1 billion. Many elements, though, have been removed and added to the narrowed list of alternatives and there are likely to be significant changes.

MARTA in July presented 10 alternatives in public meetings. According to Hobbs and the presentation about the three finalists, public feedback strongly supported using either Avondale or Decatur as the eastern terminus and showed a “fatal flaw” for a Decatur-based route in concerns about property takings and related impacts that would be needed on streets in a generally narrower corridor.

Hobbs said that right-of-way takings for the three alternatives are likely “not substantial,” at least in comparison to some of the rejected concepts. But further study is required and the project still could involve buying and demolishing some buildings. One that Hobbs could not rule out is Heretic, a Cheshire Bridge Road nightclub with a storied history in Atlanta’s gay culture whose potential demolition for the project drew outrage when the possibility was floated in 2019. “Again, this is all preliminary,” said Hobbs. “It could [be demolished], but it could not also.”

One BRT advantage in terms of right-of-way, Hobbs said, is that it could use a reversible single lane as its dedicated pathway. Such dedicated lanes are a fundamental part of making BRT actually “rapid.” However, MARTA is just introducing such lanes in Atlanta and it remains to be seen if they will remain clear for buses because they do not have physical barriers to keep out private motor vehicles. MARTA officials say they are working on state and local regulations to prohibit such encroachments, but how well enforcement works in practice remains to be seen.

Also uncertain is the construction timeline. The project is still on the books from the “More MARTA” sales tax of 2016 as having a start date of 2036, but the transit agency says that is tentative. The only certain next step is more public meetings about a final alternative to be held in January or February and a plan on the books by the summer of 2023.

The elephant in the room is whether MARTA is going to end up choosing BRT over light rail transit (LRT) no matter what, as it has done or is leaning toward in several other recent projects to great controversy. The Clifton Corridor, like the BeltLine and Clayton County’s commuter route, was originally proposed as a rail project but has opened to BRT consideration, with MARTA citing cost or technical issues. The transit agency faced fierce opposition earlier this year to choosing BRT for the Campbellton Road corridor in Southwest Atlanta.

Hobbs said, though, that light rail is still in play. “Ridership – you still want to move the most people. Both modes move a fair amount of people,” he said. He indicated a decisive factor would be a ranking of each mode by the Federal Transit Administration – part of securing federal funding – on such comparables as cost, ridership and environmental impacts. And BRT would be less expensive on some infrastructure, Hobbs said, such as the need for an LRT maintenance facility which would have to be built for a cost he estimated at around $100 million.

A MARTA survey following July’s presentation on alternatives found 45 percent of 1,765 respondents open to BRT as the mode, and another 29 percent also open on the condition that future conversion to LRT remains a possibility. Hobbs said that if BRT were chosen, that LRT conversion likely would be possible, at least on the railroad right-of-way portion that comprises about 90 percent of the proposed routes.

MARTA Deputy General Manager Josh Rowan pushed the idea that either mode would be good for handling an expected metro Atlanta population boom. “We certainly don’t want to get over-focused on mode, because it really is about moving people and shifting out of the [private] vehicles, and so this is a great project,” he said.

Alternative 1A: BRT, Lindbergh to Avondale. A bus using dedicated guideways or lanes, possibly including a reversible lane on North Decatur Road. 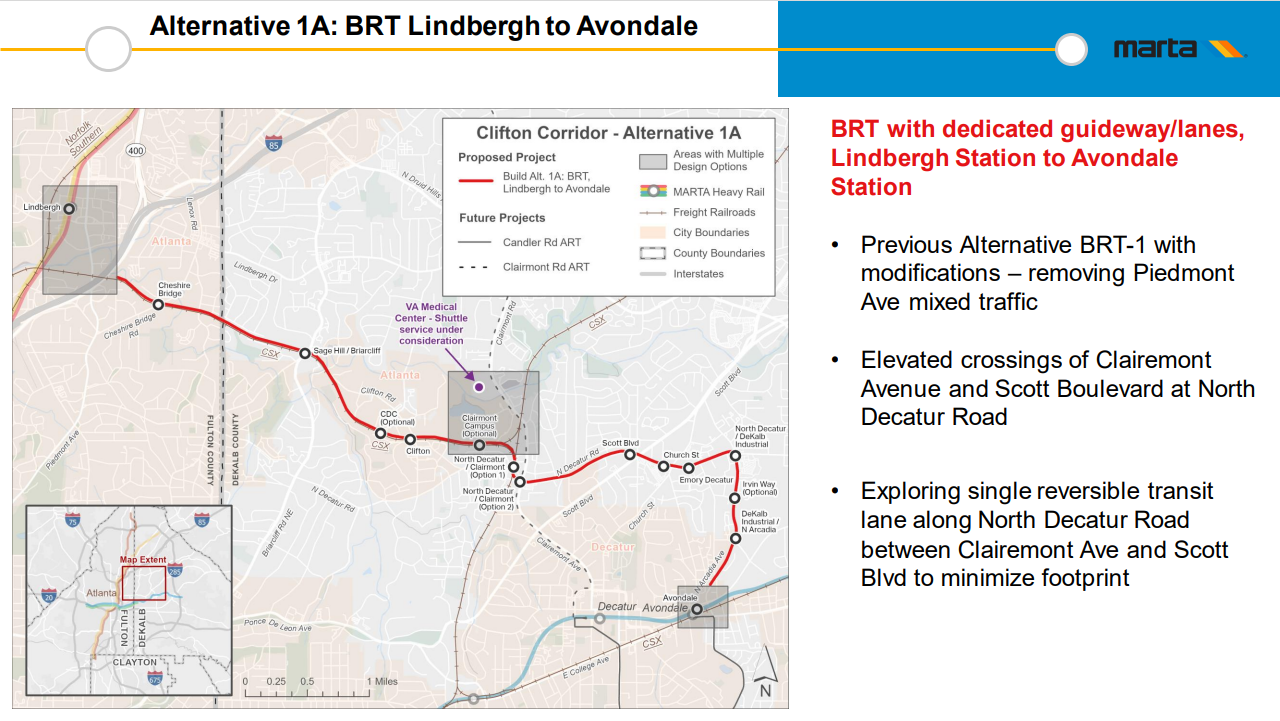 Alternative 1B: BRT to Avondale plus Decatur ART. This option is the same as 1A, but includes an ART spur to Decatur Station. 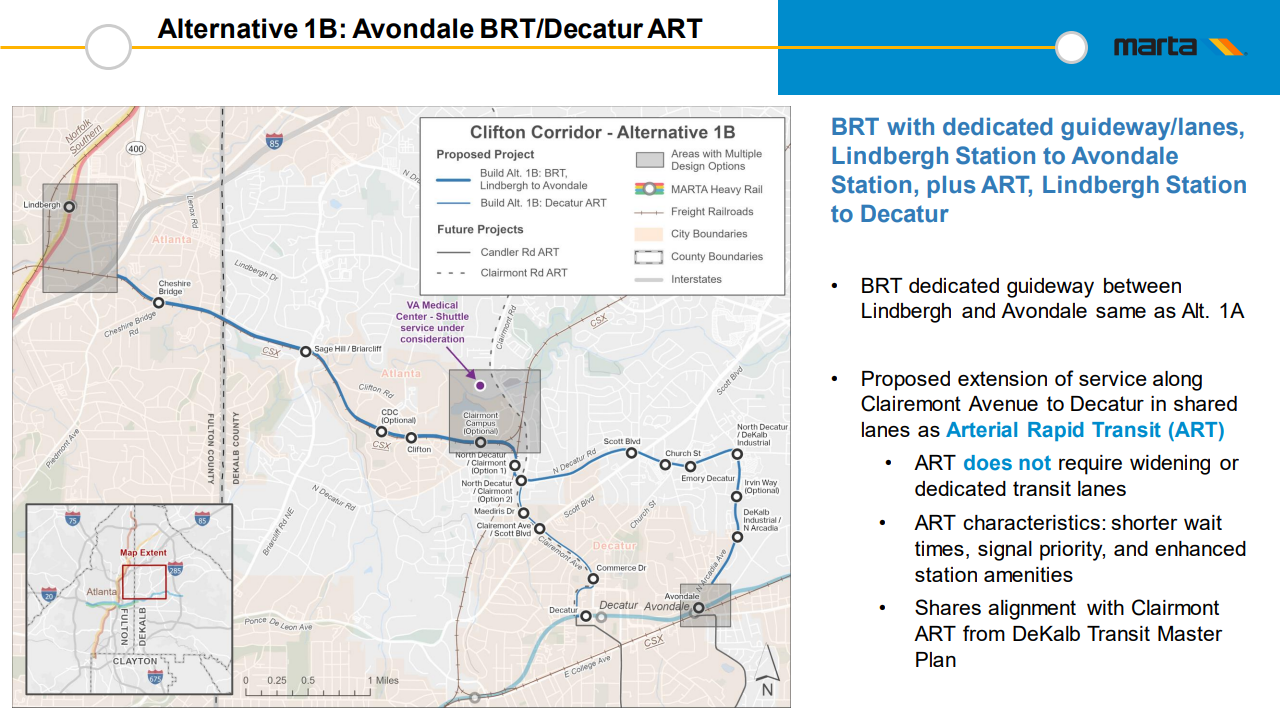 Alternative 2: LRT, Lindbergh to Avondale. Essentially the same route as 1A, but using light rail. 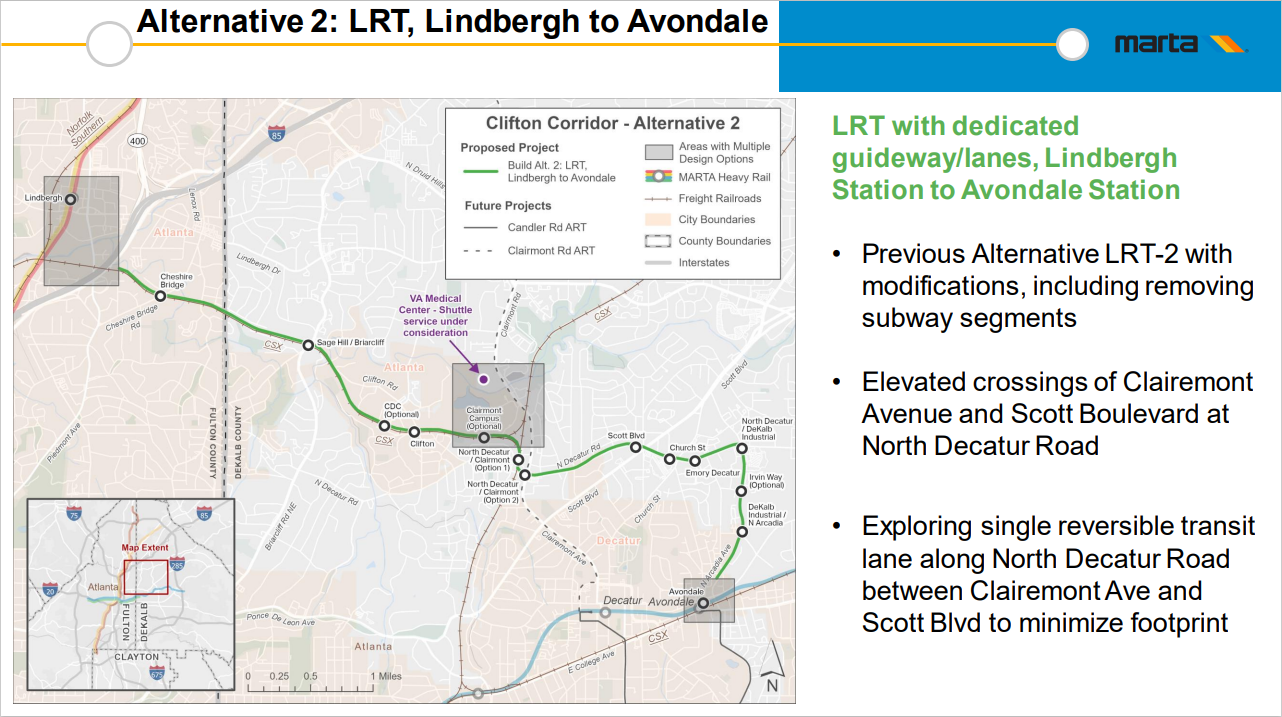 Correction: A previous version of this story incorrectly reported that the BRT option, rather than the LRT option, would require a $100 million maintenance facility.