A photo of the Atlanta Streetcar on its existing Downtown on-street route, as shown in a Sept. 12 and 13 MARTA presentation.

The Atlanta Streetcar extension onto the Eastside Atlanta BeltLine is moving toward a final design phase with no clear answer to its oldest question: What the heck is this transit service for, exactly?

Is the BeltLine Streetcar – as pitched from the moment of its announcement over a decade ago – still a beachhead for rail transit on the BeltLine and elsewhere in the car-centric metro? Or is it – as MARTA is increasingly hinting – to remain a touristy rail spur that everyone else on BeltLine transit might have to hop on and off a bus to reach?

Sophisticated concepts shown by MARTA at two “Streetcar East” update meetings last month lacked any head-on tackling of that big picture or data like fresh, post-pandemic ridership and economic development projections. The transit agency told me afterward that it is far from finishing an analysis of whether bus or rail is better for the rest of the BeltLine. A spokesperson also suggested the mode doesn’t really matter because the “type of wheel” is not the focus of transit goals and connecting bus and rail services “is not a difficult issue to resolve.”

“It’s literally the stupidest idea I’ve heard about the BeltLine in a long, long time,” said Ryan Gravel, the urban planner who dreamed up the BeltLine in the first place and four years ago co-founded BeltLine Rail Now to resist backsliding on the project’s original transit vision, when I shared MARTA’s comments. “…It’s stupid. It won’t work. That’s not how transit systems work. And why would we do it anyway?”

He pointed to the obvious attraction of a one-seat ride on a single-mode BeltLine transit system, and such engineering issues with buses as the need for a wider, paved roadway – meaning less green space – and significant barriers to prevent pedestrian collisions or trespassing trail-users.

It’s a heck of an argument to be having at this point in a project budgeted at $176 million to $215 million (and only rising in this economy) that MARTA aims to start building in 2024 and open in 2027. Especially since the BeltLine transit issue has been argued repeatedly, generally in favor of rail, to varying degrees of political satisfaction.

Atlanta BeltLine Inc. (ABI) is the organization planning, building and operating much of the 22-mile loop of trails in partnership with MARTA on the transit element. Sensitive to criticism in recent years that the emerging trail system was not living up to original promises of equity and connectivity, ABI has made various adjustments and program pushes, including a commitment to seeing transit built on the entire loop.

ABI President and CEO Clyde Higgs told my colleague Maria Saporta earlier this year that “rail transit is part of our DNA” – though he also hedged by adding, “Until we hear a compelling reason to go in another direction, that’s our position.”

After last month’s Streetcar extension meetings, I asked ABI about the timing of a full BeltLine transit mode announcement and the question of Streetcar connectivity. Spokesperson Meghann Gibbons referred all the questions to MARTA, but said the two organizations are “constantly collaborating.”

Mayor Andre Dickens also previously told SaportaReport he is “definitely committed” to rail transit on the BeltLine and that the Streetcar extension as the first step is “what I’m hoping for and pushing for.”

He’s carrying a mayor torch passed on from former Mayor Kasim Reed, who launched the controversial service in 2014 on a Downtown loop between Centennial Olympic Park and Sweet Auburn. The Streetcar was in many ways a classic case of Atlanta civic hucksterism, a showpiece aimed squarely at tourists with less comprehensible benefits to people who actually live there. It was touted in ads in New York’s Times Square and launched with Reed proclaiming he wanted it to appear in a James Bond movie. Run by the City, the service quickly ran into safety issues and stuck-in-traffic delays. MARTA took it over in 2018 but frequently halted its service during the major events tourists – maybe even those from Times Square – come to see.

However, there was a method to Reed’s PR madness. As he said at the time and successors have since, the Streetcar was an attainable “linchpin” to building out a rail transit system, including on the BeltLine. 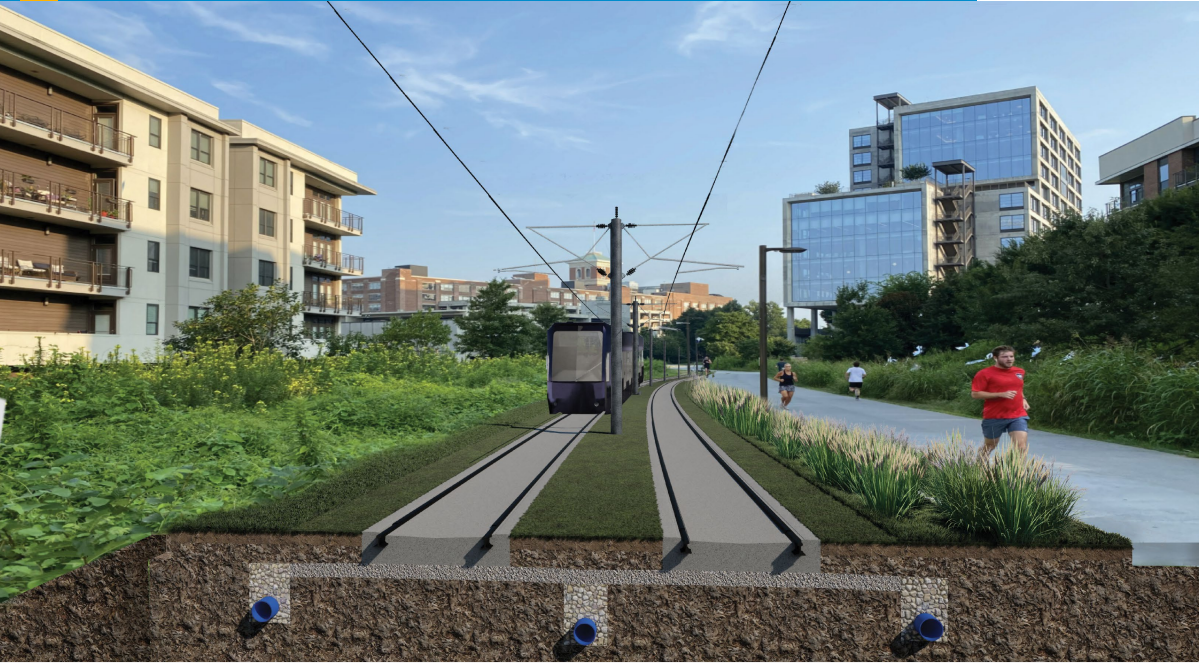 A MARTA illustration showing a cross-section of the type of track it would use for the majority of the Atlanta Streetcar’s extension onto the Atlanta BeltLine’s Eastside corridor, as shown in Sept. 12 and 13 meetings.

The extension concept originally floated by Reed is the one MARTA is now working on. It would extend the Streetcar loop from Auburn Avenue at the Martin Luther King Jr. historical site onto the BeltLine at Irwin Avenue and northward to a modern tourist showpiece, Ponce City Market on Ponce de Leon Avenue.

At Sept. 12 and 13 public meetings, MARTA showed design updates for the route that essentially maximized greenery and minimized barriers while aiming to safely run Streetcar vehicles on the BeltLine. Accessing the BeltLine at Irwin is a major issue that might be addressed by closing the street to vehicles there – with a week-long pilot program to test that concept coming this month. A “one-seat ride” – the feature MARTA might not provide on the entire BeltLine – is touted as among the benefits of the Streetcar extension as it connects the Eastside Trail and Downtown.

MARTA officials indicated that the extension could bring attempted improvements in the existing service’s conflicts with on-street vehicle traffic, including traffic signals automated to change in favor of the Streetcar and elimination of street parking on part of Edgewood Avenue.

So the BeltLine might improve the Streetcar; but will the Streetcar improve the BeltLine’s transit? That bigger picture was murky, with MARTA officials focused on the extension as a singular project moving ahead due to funding and environmental approvals that are already secured.

Money is always a contentious issue, going back to 2012, when Reed announced major funding for the Streetcar project in tandem with a push for a regional transportation sales tax that failed at the ballot box. A 2016 “More MARTA” sales tax referendum succeeded albeit with controversy over MARTA’s focus on projects other than BeltLine rail.

Last year, MARTA reignited BeltLine rail excitement with its first Streetcar extension update in years, but also with the big asterisk that a “feasibility study” of light rail could affect the plans.

That study for part of the BeltLine came amid ABI’s difficulty in securing routes for even the multiuse trail element through dense areas of Buckhead. In February, MARTA said it has found rail could cost twice an earlier estimate to build, putting it out of reach of federal funding, and that two more years of research could follow. That timeline would push against the anticipated construction of the Streetcar extension.

Josh Rowan, MARTA’s new deputy general manager, told SaportaReport in August that the transit agency must be “fairly agnostic” about the type of transit on the BeltLine and noted other significant issues relating to cost and public will, such as the need for property acquisition for right-of-way.

MARTA spokesperson Stephany Fisher gave a stronger version of that view after the September Streetcar meetings.

“MARTA remains committed to a collaborative effort with ABI and the City of Atlanta to develop a transit system that connects people to opportunity, is equitable and spurs economic development,” she said in an email to SaportaReport. “That conversation needs to include a focus on the purpose and need of each project, which includes analysis of getting people where they need to go, frequency of service, and ease of use of the system. We will not realize our shared goals if we focus on the type of wheel for the transit vehicle.”

But if the rest of the BeltLine is something other than light rail, how would it interact and connect with the Streetcar? “This would be assessed during the planning effort and detailed during design,” said Fisher. “However, it’s not much different than buses picking up people at train stations. It’s too early for this discussion, but it is not a difficult issue to resolve.”

Fisher did not give a timeline for BeltLine transit mode selection but indicated it would be based on a project-based “alternatives analysis” that would be years away. She said the agency “can’t be biasing the discussion” about alternatives on projects for which it is likely to seek federal funding. And there are many projects ahead of those, she said: first the construction starts for Summerhill bus rapid transit (BRT) and Five Points Station’s makeover, then “the next wave for design” with Campbellton Road BRT, Clifton Corridor transit and the Streetcar extension itself. “These other projects will come later,” she said.

Gravel questions MARTA’s willingness to complete the BeltLine transit or to understand how ABI and the City spending more to get quality results is part of what has made the still incomplete trail loop already a success to many. He raised the equity and political issue of a popular, gentrifying part of the BeltLine getting rail but other areas not. He worries that the Streetcar’s on-street performance woes will continue and unfairly taint public perception of transit operations in the BeltLine’s dedicated route.

More broadly, Gravel said that on a project like this, money follows civic vision and political willpower, not the other way around.

“I think people don’t understand the BeltLine, why it works,” he said. “…The BeltLine is more than the sum of its parts. There’s something about it that’s metaphorical in a way — the circle. And it works because of that. There’s no technical explanation for it, but people love it, and that love is what translates into its success.

“Sometimes Atlanta just doesn’t believe in itself,” Gravel added. “We lower our expectations for ourselves because we don’t want to do the hard work. This is not that complicated.”