Given that MARTA’s proposed budget calls for no fare hikes or service cutbacks despite the rigors of the coronavirus pandemic, a highlight may be the state’s $6 million commitment to help MARTA expand the Bankhead Station to serve the announced Microsoft campus. 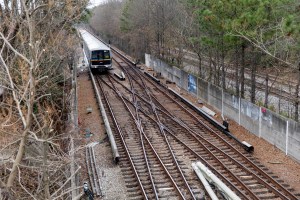 MARTA has plans to continue maintaining the tracks’ ‘state of good repair’ in the budget for the fiscal year that begins July 1. Credit: MARTA

The state funding represents more than the expanding recognition by the State of Georgia that transit is as much an aspect of mobility as roads and bridges.

The money is a milestone in the state’s growing acceptance of MARTA as a fiscally responsible government. Historically, the Legislature’s view of MARTA is so guarded that it maintains a joint House-Senate committee to oversee MARTA, despite most of MARTA’s funding coming from taxpayers in Fulton and DeKalb counties.

MARTA Board Chair Rita Scott offered this observation in a March 1 statement:

MARTA’s latest bond rating by Moody’s Investors Service, in March 2020, was Aa2. This is a top-tier investment grade Moody’s assigns to bonds “judged to be of high quality and are subject to very low credit risk.” 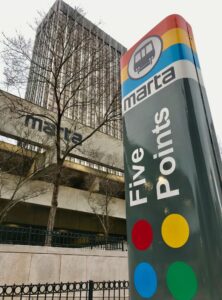 MARTA is moving ahead with plans to retool the Five Points Station, in order to serve Atlanta’s public private retooling of the Gulch into a mini city named Centennial Yards. Credit: Kelly Jordan

The state earmark got its start in 2020, when Gov. Brian Kemp signed House Bill 105 to provide state funding to help fund brick-and-mortar costs of transit systems. The money is to be raised through a 50-cent tax on ground transportation including Lyft and limousines. Upwards of $50 million a year could be raised, according to one fiscal note that traveled with the legislation.

This year, Kemp and the Legislature followed through with two separate measures. First, the state established a trust fund, via House Bill 511, to hold the revenue collected for transit. Second, the state allocated $6 million to MARTA to help pay for expansion of the Bankhead Station.

MARTA has balanced its budget for the past nine years and, on June 10, the MARTA board is slated to adopt the 10th balanced budget. The spending plan is for the fiscal year that begins July 1. The system has conducted a series of public hearings online to display the spending plan and collect public comment.

The proposed budget includes $559.1 million projected revenues. Federal Covid relief funds account for 20% of the sum: 10% ($55 million) from the American Rescue Plan, signed this year by President Biden; and 10% ($58.4 million) in CARES Act funding, signed by then President Trump.

MARTA has reserved $29 million of its ARP funding for the fiscal year that begins in July 2023. The allocation of remaining funds is to determined, according to a budget synopsis.

Ridership is expected to rebound in the coming fiscal year and continue to recover, according to the budget proposal. MARTA is anticipating a return to normal as more riders return to normal commute habits in the late summer and autumn. Here’s the snapshot of forecasts:

Previous Article
The perseverance of Morris Brown College: The beginning of the end… or is it?
Next Article
Tax Day, stretched across the calendar, is still a time for tribulation