MARTA’s $225 million rail improvement program to improve speed and safety is another marker of certainty among transit leaders that ridership on the region’s core transit system will rebound from a pandemic slump. 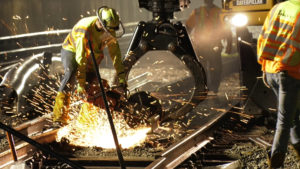 “It’s a nod to the fact that we’re not afraid to invest money in capital improvements and this is just one of them,” Collie Greenwood, MARTA’s deputy general manager of operations and urban planning, said in a video of MARTA leaders describing the project.

The upcoming project consists of removing and replacing track on the Red and Gold lines between Lindbergh Station and the Buckhead and Lenox stations. The job includes replacing devices that enable trains to switch from one track to another in an area north of Lindbergh Station named Canterbury Junction.

Passengers will be required to travel on buses between the stations during the construction period, from Feb. 16 through Feb. 22. Full details are available on this page of MARTA’s website.

“This investment that we’re doing, a multimillion-dollar investment, is really aimed at keeping our system safe, reliable,” Jeffrey Parker, MARTA’s general manager/CEO, said in the video. “We do have a speed restriction in that area right now. The work, once completed, will allow us to remove that speed restriction and operate at a higher speed, safely.” 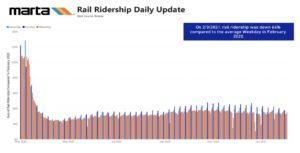 Ridership on MARTA’s rail system is expected to recover from the pandemic-related slump as the economy reopens, which some economists expect to be in full swing by late summer. Credit: MARTA

The investment comes as MARTA ridership figures have yet to recover from their pandemic-related plummet.

MARTA has said it is tracking ridership figures in order to respond as commuters return to patterns that show some semblance of their pre-pandemic patterns.

A significant proportion of the drop is related to riders who work in office buildings and other commercial structures in Buckhead, Midtown and Downtown Atlanta. As buildings shuttered during the pandemic, some employees were able to work remotely and others lost their jobs.

A number of economists predict that the economy will rebound by the third quarter as the pandemic fades. Mark Zandi, chief economist for Moody’s Analytics, said in a webinar hosted in January by the Volcker Institute that he thinks enough of a herd immunity to COVID-19 will have been reached by mid Summer as the vaccinations program rolls out. 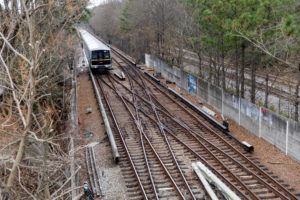 Rail and switching devices that comprise the lace-like configuration of tracks at the Canterbury Junction, north of the Lindbergh Station, are to be replaced in February. Credit: MARTA

Likewise, sentiment for a return to office is increasing among corporate leaders, according to the latest The Future of Office client survey conducted by CBRE, a real estate management firm. The report compares results of surveys conducted in June 2020 and September 2020. Half respondents are Fortune 500 firms and half are trending firms.

One headline observes: “The physical office is still a requirement in the future.” A few of the report’s bullet points observe: