An apparent lifetime ago, in 2014, MARTA gingerly entered the world of allowing ads for alcohol on its vehicles and premises. The advertising contract is again out for bid, with provisions for alcohol, and no significant protests have emerged. 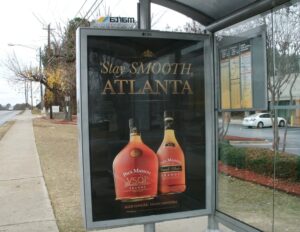 This is one of MARTA’s early alcohol ads, in 2014, and the community has continued to accept MARTA’s judgment in the ads that are allowed on vehicles and property. (File)

This situation is another indication that sentiments about alcohol are changing fairly quickly in Georgia.

The state remains a buckle of the Bible Belt in many ways, such as its current involvement in a case that explicitly requests the U.S. Supreme Court to overturn the Roe v. Wade abortion ruling.

Restrictions related to alcohol are waning.

Just this year, the Georgia Legislature and Gov. Brian Kemp approved a bill to allow cocktails to be packaged and sent home with a meal. The maximum is two cocktails per entree, according to Senate Bill 236.

These to-go cocktails are a milepost in the trajectory of change in attitudes about alcohol.

In 2018, a third of the House and Senate voted against allowing voters to decide if they want to allow cocktails to be sold before 12:30 p.m. on Sundays. The measure was dubbed the “Mimosa Mandate” and “Sunday Brunch Bill.” It did not open the floodgates of Sunday sales, but Senate Bill 17 did authorize local governments, those that already allowed Sunday sales to begin at 12:30 p.m., to put a question to voters about allowing sales to start at 11 a.m. on Sundays. 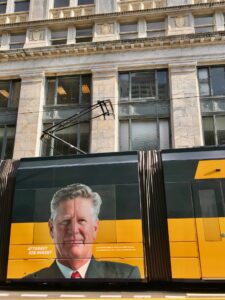 MARTA’s alcohol advertising does not aim to test the limit of local temperance concerns. The purpose of the advertising is to raise money to help cover operating costs, as it was when MARTA first authorized alcohol advertising. MARTA will be able to pull any ads it deems inappropriate, according to the request for proposal:

This provision comports with MARTA’s overall control of advertising content:

MARTA intends to continue the current regulations of the density of alcohol messaging and related content, according to the RFP: 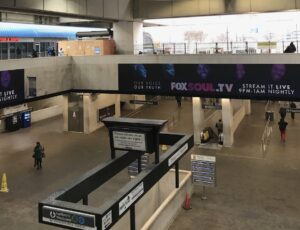 MARTA is seeking an advertising company to help sell and manage content on transit stations, including the revised Five Points Station. (Photo by Kelly Jordan)

The selection process is moving forward. Aug. 10 was the deadline for proposals and 10 proponents had attended a pre-bid conference. Ads can be sold for the following areas, according to the RFP:

The criteria also include: