What if every election day folks voted more than once — legally — ranking candidates from first to last? Or what if folks who weren’t registered at all showed up on Election Day and got a ballot? Some states are going down those roads, but Georgia candidates for the top election post aren’t sure they’d follow.

Start with what’s called “ranked-choice voting.” Australia has used it for decades in federal elections and Maine is trying it with state ones.

Rules vary from place to place, but broadly, you indicate who’s your favorite candidate, second-favorite and so on. Then, on election night, if no one candidate wins on first-choice votes, the last-place candidate is eliminated. Everybody whose first choice was that last person, their second-ranked choice gets counted instead. It goes on like that until there’s a winner. 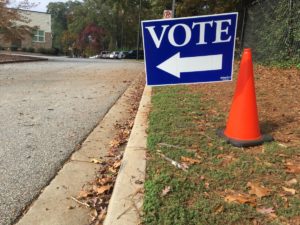 One of the arguments for it is that there are no runoffs. Voters don’t have to go back to the polls to choose between two finalists.

A dozen U.S. jurisdictions — various cities plus the state of Maine —  use RCV, according to the Ranked Choice Voting Resource Center. Some states count military ballots by RCV as well.

Supporters say that RCV might encourage more centrist politics, by making it worthwhile for candidates to try to appeal to a lot of people, searching for those second- and third-choice votes. And maybe even the electoral slate itself becomes more competitive, as more people think they’ll have a chance to influence things, even if they’re not a traditional candidate from one of the big parties.

John Barrow, the Democrat running for secretary of state said he thinks it’s a good idea. Yes for tax savings and for increased competition. And for another reason, he said.

“The runoff rules in this state are particularly complicated. Rank-choice voting would help us with that,” he said last week, speaking after an Atlanta Press Club debate.

Georgia’s almost unique in having two different runoff times, Barrow said, depending whether it’s a federal or state election.

“One, I’m afraid that it would actually hurt minority voters and also [candidates who are] newcomers, upstarts” who don’t have name recognition, said Raffensperger. He pointed to an article in the William and Mary Law Review that lists many arguments for caution around RCV. It argues that low voter turnout is in part due to weak parties; and that RCV may weaken parties further.

Raffensperger is also concerned about constitutionality. Making such a change would require digging into the state Constitution.

Maine’s state Supreme Court found that state’s RCV unconstitutional, though the ruling was based on how that kind of voting was enacted. Any such process in Georgia might be different.

Now, if there’s any party that gets picked least in Georgia, it’s the Libertarian Party. One thing Libertarians often argue is they’d get more votes, but voting “L” makes voters feel they’re throwing their vote away.  Libertarian secretary of state candidate Smythe DuVal is very much in favor of ranked-choice voting.

“That’s going save Georgia counties millions of dollars. But it’s also going to allow voters — which they love — to be able to choose their most favorite candidate without any having any kind of strategy of who might win, who might not win. They can vote their conscience,” DuVal said.

Duval is also a fan of same-day voter registration; it’s one of the main planks in his platform, which calls the current voter registration deadline — 28 days before the vote — “arbitrary.”  He’s campaigning on a position that any voter who has a valid photo ID ought to be allowed to vote provisionally with the ballot being counted as soon as the voter is verified.

A total 15 states plus the District of Columbia offer same-day registration on Election Day, according to NCSL.

Barrow said he’s very interested in same-day registration, but not until “we have enough confidence that the technology we’re using at the place of voting is secure enough that it can’t be interfered with and messed around with some place else. And if we can do that, I think that would be a great convenience for the voters.”

Raffensperger said that people came across from Massachusetts voted in New Hampshire, saying they had just moved there.

However, while there have been claims of buses taking people from Massachusetts to New Hampshire to vote in 2016, and President Donald Trump has reportedly said such fraud cost him New Hampshire, there has been no documented widespread fraud. Complicating things, New Hampshire has both Election Day voter registration and a confusing legal status of “domicile” there.

Anyway, any big changes in Georgia, like RCV or same-day registration would need to begin in the state Legislature and would need to have the support of the Governor. Secretaries of state can endorse such changes, lobby for them or rally for them, but it’s not a decision that rests with one person.

Election Day in this state is Nov. 6. Early voting starts on Oct. 15. Info on county time and locations is here.