Norfolk Southern received financial incentives valued at up to $607 million from Invest Atlanta. The city's development arm provided up to $600 million in lease purchase bonds and will administer a $7 million grant provided by the state of Georgia. (Photo taken December 2020). Credit: Kelly Jordan

Norfolk Southern could sell its new headquarters in Midtown five years after the lease begins in 2021, the company said in a recent financial disclosure. Atlanta’s development arm expects the company to stay in place 10 years as part of the $600 million package it provided the company. 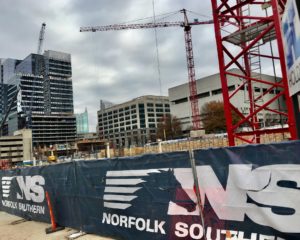 Norfolk Southern received financial incentives valued at up to $607 million from Invest Atlanta for the railway’s new headquarters. The city’s development arm provided up to $600 million in lease purchase bonds and will administer a $7 million grant provided by the state of Georgia. (Photo taken December 2020). Credit: Kelly Jordan

These two dates may not contradict one another. In addition, Norfolk Southern’s sale of any interests in the building would not preclude the company from continuing to occupy space in the building.

The situation suggests that the incentive package may be more nuanced than generally understood during the frenzied announcement of a new job creator coming to town.

The notion that Norfolk Southern has a five-year window on the deal appears in a report filed with the federal Securities and Exchange Commission.

On Feb. 6, the company submitted its annual, comprehensive financial disclosure and the report, the 10-K, contains this language:

For its part, Invest Atlanta – the city’s development arm – expects to hold title to the property for 10 years. That’s in the terms of bonds that helped pay for construction. 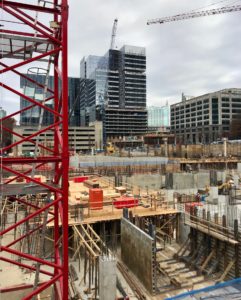 Norfolk Southern said it may sell, buy or renew its lease at its new headquarters in Midtown five years after construction of the new headquarters is complete, according to the company’s recent federal financial disclosure. Photo taken December 2020. Credit: Kelly Jordan

These are the terms outlined in Invest Atlanta’s description of lease purchase bonds:

Terms do not provide provisions to claw back any incentives if Norfolk Southern fails to execute certain terms, an Invest Atlanta spokesman wrote in an email.

The salaries, high by metro Atlanta standards, that are to be paid in the building represent one criteria cited in Invest Atlanta’s documents as a justification for the use of lease purchase bond financing to aid in construction.

The company’s payroll at the new office tower is to exceed $300 million a year. This figure is based on figures in a report Invest Atlanta provided for a $7 million grant the state provided – wages of $105,331 for each of 2,875 jobs, to include a net of 850 new full-time jobs and the retention of 2,025 existing full-time jobs.

City taxpayers are not responsible for paying off the loan in the event of default. Although the city issued the bonds, the city is not backing the debt. This means lenders have no recourse to recover investments if the loan defaults, other than the value of the building, according to terms of the deal.

This deal resulted from a comprehensive press by city, regional and state leaders to bring to Atlanta the headquarters of one of the world’s larger railway companies. The payroll alone added to the frenzy to draw Norfolk Southern from the 20-story tower in built in 1989 in Downtown Norfolk, Va.

A report by Invest Atlanta noted the depth of the effort to outbid other locales to provide incentives sufficient to attract Norfolk Southern to Atlanta:

Previous Article
Modular construction could provide affordable housing, lower costs across the board
Next Article
‘Emma’ – a ‘delightful’ adaptation of Jane Austen’s classic