With the deadline Monday for bids to complete a road project on Peachtree Road in Buckhead, the stage is set for the fulfillment of more than a decade of expectations when construction is to be complete, in mid 2021. 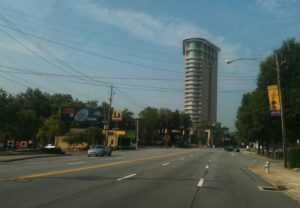 The Peachtree Road corridor is to be turned into a Complete Street, with sidewalks and a sizable median, a few blocks north of this similar segment of the corridor, which is located near The Peach shopping center. Credit: David Pendered (2012)

The project is expected to make this stretch of Peachtree more pleasant for pedestrians and bicyclists, while helping to ease traffic congestion along one of the region’s major corridors, one that’s home to hospitals, office and apartment towers, and retail destinations.

The transit improvements are to include better connectivity for MARTA bus stops and to the Buckhead Station, according project documents.

The final phase of the Peachtree Complete Street project is to stretch a fairly short distance, from Maple Drive to Shadowlawn Avenue. But the distance is significant in that it marks the third and final phase of a project that was started in the early 2000s. This is the project description contained in the invitation to bid that was issued by the City of Atlanta:

“The project consists of constructing a typical section with three lanes in each direction consisting of:

Atlanta’s Procurement Department is soliciting the bid on behalf of Atlanta’s Department of Public Works and the Buckhead Community Improvement District. The CID is helping to pay for the retrofit with proceeds of the property tax assessed on commercial properties in the district.

Jim Durrett, executive director of the Buckhead CID, has been offering insights on the corridor for years, drawing upon a career spent in devising smart growth strategies for the region. Durrett assumed his current position in 2009.

In a letter published in SaportaReport.com on Nov. 5, 2015, Durrett offered an analysis of the state Department of Transportation’s proposal to restripe Peachtree Road in an attempt to improve safety and reduce congestion. The piece elicitedf 31 comments from readers.

Along the way, the Buckhead CID has nurtured the appearance of the corridor with an intense greenscape program. For example, one year the program was so detailed that it specified the number of specific flowers to be planted: Angelonia Carita – purple, 4 inch, 569; Caladium – Aaron 4 inch, 765; Duranta – Gold Edge, 4 inch, 656. Attention was paid to covering of the flower beds – 133 bales of pine needles to be spread, twice a year; and 272 cubic yards of mulch to be spread one a year, in January.