Peachtree Street as a ‘shared space’? Comments accepted through Nov. 29

Atlanta is advancing plans to restrict vehicles on Peachtree Street in Downtown Atlanta. The deadline for submitting comments in this phase of the planning process is Sunday, Nov. 29. 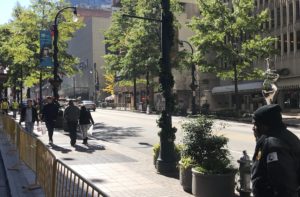 The project identifies two examples of the concept of a “shared space road” – in London and Seattle.

London’s Exhibition Road, in South Kensington, serves a museum district that attracts 11 million pedestrians a year, according to a 2012 report in theguardian.com. Seattle’s Bell Street is a one-way road with two lanes that connects the city’s most densely populated neighborhood with downtown Seattle, according to a 2014 report by the National Association of City Transportation Officials.

In Atlanta, it appears the comparable concept exists at Centennial Olympic Park, where a road through the park serves a mix of pedestrians, cyclists, scooters and slow-moving vehicles.

This concept of shared space road is the latest version of a 2019 plan to revise traffic patterns in Downtown Atlanta. Atlanta Mayor Keisha Lance Bottoms halted that plan in July 2019 and sent it back for review by the city’s planning and transportation departments.

In the 2019 version, the city had not accommodated the convention industry – there was no plan for the buses that shuttle conventioneers between the hotel district on Peachtree Street and the Georgia World Congress Center. Bottoms halted it by vetoing $1.3 million in city funding for the planned $2.7 cost of converting Baker Street – which serves convention buses – from one-way to two-way. 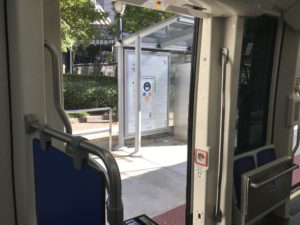 The Atlanta Streetcar stops at Peachtree Center, which in a city-sponsored survey received high marks for its recent renewal and low marks for not providing the amenities and access of a public park. Credit: David Pendered

The current plan is to reconfigure travel patterns along a segment of Peachtree Street, a sector that stretches about 1.5 miles between North Avenue and Five Points. The major landmarks are, on the north, the Bank of America tower and Emory University Midtown Hospital, and, on the south, Woodruff Park.

The intent is to discourage vehicular traffic in order to enhance the safety and comfort of other forms of mobility in this section of the Peachtree corridor. Public amenities such as greenspace and street furniture could be installed.

This is how the city describes the project:

As of Thursday, a significant proportion of the crowdsourced comments on the new proposal appear to represent persons whose interests don’t involve a vehicle. Charging stations for electronic bikes, skateboarding, and amenities for pedestrians are topics added to the wish list in the survey platform. Five comments observe: 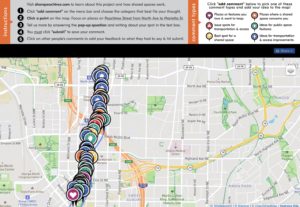 Atlanta is accepting comments through Sunday, Nov. 29 on its Community WikiMap on the Peachtree Shared Road project. Credit: wikimapping.com 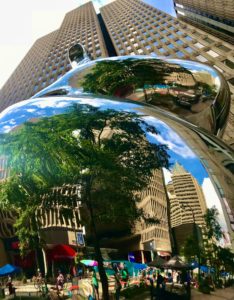 The Streets Alive festival attracted crowds to a segment of Peachtree Street that was free of cars and trucks. Credit: Kelly Jordan (Sept. 30, 2018) 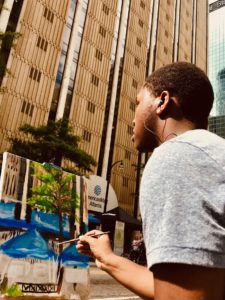