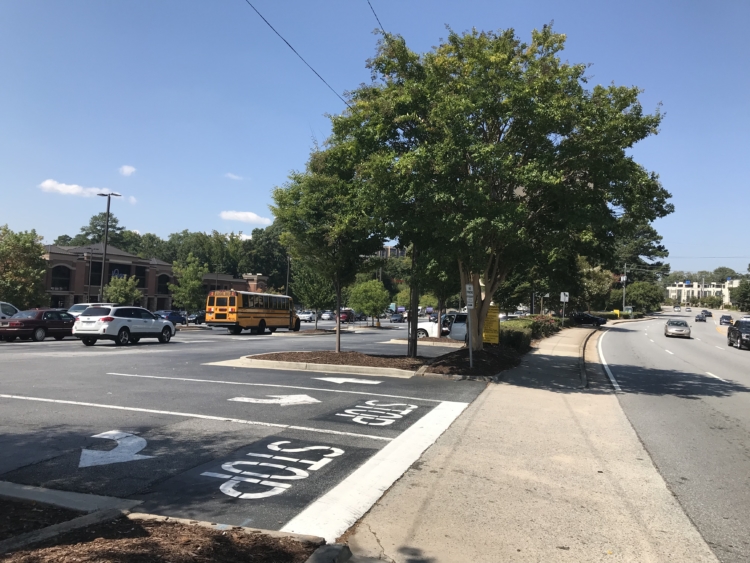 At Cherokee Plaza, located near MARTA's Brookhaven Station, Brookhaven is considering a request to close some access points, add a traffic signal at a new access point, and expand the sidewalk and landscape zone along Peachtree Road. Credit: David Pendered

A proposal to save five specimen oak trees in exchange for tweaking the sidewalk requirements at a busy shopping center along Peachtree Road in Brookhaven, near MARTA’s Brookhaven Station, has received preliminary approval from city planners. 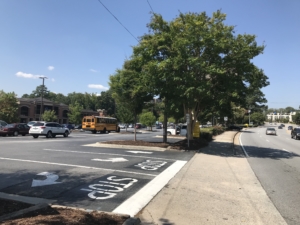 At Cherokee Plaza, located near MARTA’s Brookhaven Station, Brookhaven is considering a request to close some access points, add a traffic signal at a new access point, and expand the sidewalk and landscape zone along Peachtree Road. Credit: David Pendered

The situation at Cherokee Plaza is one of many being encountered around the region as the population increases. Landowners seek to alter their property to meet changing consumer demands and preferences. Sometimes changes proposed at legacy developments run counter to growth requirements implemented long after the developments were built.

The decades-old Cherokee Plaza is located at the intersection of Peachtree Road and Colonial Drive, a block from Peachtree Road’s intersection with North Druid Hills Road. Surrounding land is being developed into shops and offices and other commercial uses.

As the owner seeks to improve the comings and goings from the parking lot, planners face topographical challenges including the railroad and MARTA tracks that abut the rear of Cherokee Plaza. Colonial Drive has a steep hill to crest the bridge that crosses the tracks. The building and parking lot at Cherokee Plaza are immediately adjacent to the hill on Colonial Drive.

As Brookhaven’s planners observed in a pending variance request, unique challenges at this location include:

This situation has existed for more than 30 years, long before Brookhaven was established and when the area was in unincorporated DeKalb County. The topography has become an issue because the owner wants to change the way drivers enter and exit the shopping center.

A traffic light to control a new entrance/exit that would be created across from the existing Brookhaven Drive. Two existing full service access points would be closed – one into Cherokee Plaza and one into Starbucks. An existing full service access point would be limited to a one-way entrance for deliveries. Access to the Starbucks would be eased by removing a barrier between the restaurant and the shopping center parking lot, according to the proposal.

The five trees mentioned in the variance application are located along Colonial Drive.

To comply with district regulations on sidewalk requirements, the five trees would have to be removed. They include two 20-inch oak trees and three 14-inch oak trees, according to the variance applications submitted by the property owner, New Market, LLC. 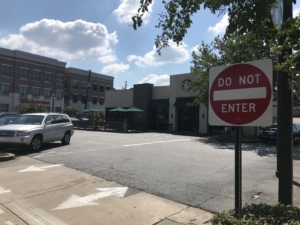 This exit at the Starbucks at Cherokee Plaza would be closed as part of a broader effort to improve access within the shopping center’s parking lot. Credit: David Pendered

Also, the company would have to provide recompense for the five trees on a site that already is difficult because of its location along Peachtree Road, Colonial Drive, rail tracks and a high-rise apartment building, according to the application.

Brookhaven city planners offered a set of conditions regarding these for the Board of Appeals to consider adding, if the board approves the variance request. The conditions enable the district’s sidewalk regulations to be amended as follows:

In addition, a condition for the sidewalk area along Peachtree Road states:

Brookhaven’s Board of Appeals is slated to consider the variance request at its Sept. 18 meeting.