Atlanta’s traffic congestion often isn’t mentioned in the reports of epic growth involving the state-owned Port of Savannah. This remains the case with the recently announced purchase of about 2,284 acres for a planned industrial center along I-16, 28 miles west of the port. 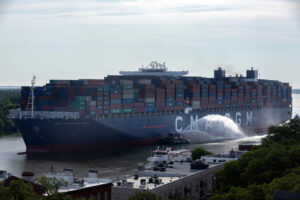 On May 26, the Port of Savannah served the CMA CGM Marco Polo, the largest vessel to ever call the U.S. East Coast, with its carrying capacity of more than 16,000 20-foot equivalent container units. Credit: Georgia Ports Authority / Stephen B. Morton

The situation illustrates the ongoing balancing act of propelling the state’s economy without crushing the existing and planned highway and rail systems. A significant portion of the 4.7 million containers that transited through the port in 2020 also passed through the Atlanta region, whether the contents were produced or consumed in the region, or were just passing through.

The latest example is a land acquisition in Bryan County announced May 25. The deal is said to be the largest in state history and the buyers include Georgia and a development authority comprised of four coastal counties. The Savannah Harbor-Interstate 16 Corridor Joint Development Authority has been working on the site acquisition since the authority was formed, in 2015.

Access to Atlanta is the No. 1 selling point in a sales pitch to potential tenants: 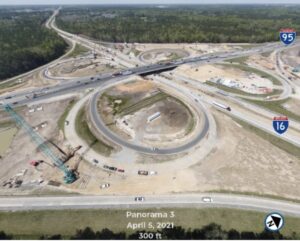 The interchange at I-16 and I-95, near Savannah, is being expanded in part to handle growing traffic from the Port of Savannah. Credit: /us20.campaign-archive.com

Three of these five cities either are Atlanta or are accessed through Atlanta, with both Birmingham and Memphis reached via I-20. Charlotte can be reached via Columbia, S.C. and Orlando is south along the I-95 corridor.

The sales pitch for the Bryan County property doesn’t mention the potential delays in delivering goods that have to transit through Atlanta to reach markets north and west of the region. Nor does it mention congestion at the intersection of I-16 and I-95.

In metro Atlanta, the cargo will travel along one of the region’s busiest roads, I-285, from I-75 to I-20 westbound. This stretch of road is not on the project list of the state Department of Transportation’s Major Mobility Investment Program. 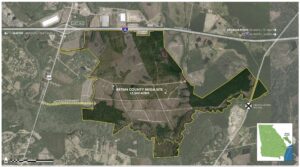 A 2,284-acre site for a potential industrial park to leverage the Port of Savannah is being purchased by the state and the Savannah Harbor-Interstate 16 Corridor Joint Development Authority. Credit: georgia.org

In addition, traffic congestion along I-75 in Henry County is likely to increase in coming years. The Atlanta Regional Commission estimates the county’s population is forecast to increase by 70% by 2050. The additional 125,000 or so residents likely will use I-75 for some of their commutes to various destinations.

In regards to congestion at I-95 and I-16, the state is in the process of restructuring the interchange and widening I-16 from the intersection to Chatham Parkway, which is located on the western edge of downtown Savannah. To widen the road, the emergency lanes along the grassy median will be paved, and a guard wall or cable is to be installed to separate the lanes that provide travel in opposite directions.

Meantime, rail transport is part of the state’s scenario for preventing the port’s truck traffic from overwhelming both metro Atlanta and the state’s highway system.

The Bryan County site is served by the Georgia Central Railway, which the state’s announcement notes provides direct service to a CSX line in Savannah and Norfolk Southern in Macon.

Train cars now can travel at speeds up to 25 mph along the Georgia Central Railway, according to a report on recent upgrades by freightwaves.com. Georgia Central is a subsidiary of Genesee & Wyoming, and now transports products including chemicals, farm and food products, fertilizers, forest products, metals, minerals and stone, plastics and pulp and paper, according to the report.

In addition, to promote the transport of freight by rail instead of by roadway, the state is developing inland ports, two in the north and one in southwest Georgia. The idea is that goods can be trucked to and from the inland ports, with rail transporting the goods between the inland port and the seaport.

Georgia is in the process of updating the 2017 Freight and Logistics Plan, with proposals from consultants due to the Georgia Department of Transportation on June 7. Approval by the Federal Highway Administration is expected in January 2023.