The warm weather has officially arrived in Atlanta! If you’re searching for fun, COVID-safe ways to get outside, look no further.

Residents looking to soak up some sunshine should consider visiting Oakland Cemetery for one of their Daffodil Days. Thousands of daffodils pop up each spring in the cemetery, and there’s even a guide to find the best blooms.

Those who aren’t fans of cemeteries can visit Piedmont Park for a free history tour. A tour is scheduled for this weekend, and visitors can learn how Atlanta’s popular park came to be.

On to more metro Atlanta news:

APS will host mass vaccination events for its teachers on March 24, 26 and 27 at Mercedes-Benz Stadium, reserving 8,000 doses of the vaccine for employees.

One month ago, the APS Board of Education urged Kemp to prioritize teachers in the next wave of vaccination distribution.

Now that COVID-19 shots are available for educators and the district’s vaccine drive is still a few weeks away, Kemp said at a press conference that the district is unorganized and doing a “disservice” to their teachers.

Esteves explained that the district had to wait several weeks to accommodate the thousands of teachers scheduled to show up, adding that the event could happen this weekend if the governor supplied the vaccines.

Esteves added that Kemp “is playing politics to cover the fact that Georgia is near the bottom in getting people vaccinated and waited months to allow teachers to be vaccinated.”

Our teachers can get vaccinated in Fulton today, but they need an appointment. As an option, @apsupdate worked with @FultonCoSchools @FultonHealth on mass events this month.

We’d love to have an event this weekend, we just need the governor to send us supply. https://t.co/P3dIRlb0Zh 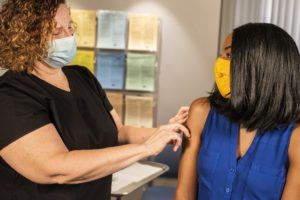 Late last week, the Biden administration announced that the Mercedes-Benz Stadium will serve as one of FEMA’s mass COVID-19

Fulton County has used the stadium as a vaccination site since January, but the federal initiative will increase capacity.

6,000 shots can be administered per day, roughly 42,000 a week, and the site will be open seven days a week for eight weeks.

The stadium will help an underserved population, according to officials, and the location was identified using the CDC’s Social Vulnerability Index, an assessment of which communities likely need more support through hazardous events.

The site is attractive because of its central location, proximity to transit and huge capacity.

Mayor Keisha Lance Bottoms said in a statement, “Today’s announcement further solidifies that the needs of the people of Atlanta remain a priority for the Biden Administration.”

Team LeBron and Team Durant battled it out on the court during the National Basketball Association’s All-Star Game last weekend at State Farm Arena.

This year looked pretty different with only 1,500 people in the stands, virtual fans and one day of festivities instead of a full weekend.

The NBA announced on Monday that no player, coaches or game officials tested positive while in Atlanta.

This quells some fears after Philadelphia 76ers players Joel Embiid and Ben Simmons had to drop out of the game last minute due to potential COVID-19 exposure.

Many questioned whether the gathering was appropriate during the pandemic, including LeBron James, who told USA Today, “Obviously, I love our league. I just think under these circumstances with what we’re going through still with the pandemic and everything with the season, I just thought we could’ve looked at it a little bit differently.”

Thanks to a $190,000 grant from Robert Wood Johnson Foundation, Georgia Watch will address issues surrounding medical billing and debt in Southwest Georgia by working with local healthcare providers and community groups.

The organization will use the grant to “find solutions to restore healthcare dignity” for Georgia residents.

Medical debt is a significant problem for Americans, with 37% of people reporting medical debt using all of their savings to pay their bills, 40% had a lower credit due to their medical debt and 26% were unable to pay for necessities, like food and heat, because of their debt.

Georgia is also doing worse than other states, and as of 2019, Georgia had the third-highest percentage of uninsured people.

Georgia Watch is a nonprofit that educates and advocates for Georgia consumers on healthcare, energy, civil justice and financial issues. 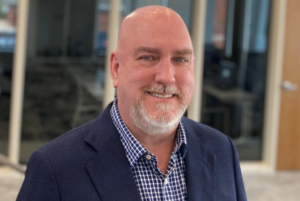 Craft is currently serving as dean for the School of Business at the University of Montevallo, and he will step into his new role in July.

“I have long admired Oglethorpe as a community of scholars with a steadfast commitment to the liberal arts. I look forward to working with the Hammack School of Business faculty, as well as our colleagues across all disciplines to build a diverse and inclusive 21st century business school,” Craft said in a press release.

The Hammack School of Business hosts roughly 25% of the university’s students. It provides a business degree through a liberal arts lens, ensuring students are adept with unique skills and job readiness. 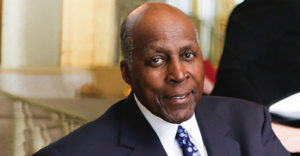 Jordan passed away at the beginning of the month at 85 years old.

President Wayne A. I. Frederick proposed the new name, saying, “Vernon Jordan’s life embodied Howard’s motto of truth and service from his early beginnings as a lawyer to his work in the civil rights movement and later as an advisor to Presidents Reagan, Bush, Carter and most prominently as a friend and advisor to President Bill Clinton.”

“Mr. Jordan is the kind of person who never met a stranger and who enjoyed mentoring students to help them succeed,” he added.

Jordan graduated from Howard University School of Law and DePauw University, and he held over 60 honorary degrees.

This week, Georgia’s top judge gave courts the green light to start in-person jury trials after about a year of pandemic suspension. Nobody knows how long it will take to get through the backlog of unindicted and untried cases.

Courts should still use videoconferencing when they can, says a March 9 order from Georgia Supreme Court Chief Justice Harold Melton.

It’ll probably be a month or so until any juries actually start meeting though, because of the time it takes to summon them, Melton noted.

And while social distancing is still part of life, cases won’t move at the scale or speed that they did before.

There’s a chance Georgia won’t be able to enact its own state tax relief due to 11 lines in Congress’ American Rescue Plan Act of 2021, according to Georgia House Speaker David Ralston, R-Blue Ridge.

And that could threaten the Georgia Tax Relief Act of 2021, he says. That bill raises the state’s standard income tax deduction, and would save mainly low- and middle-income Georgians something like $40 or so per year, depending on marital and filing status.

In a March 10 letter to Joe Biden, Ralston urged the president to have Congress to “have this flaw in the legislation corrected before signing it into law.”

That’s relatively mild as far as Republican criticism of the federal bill goes.  Georgia Gov. Brian Kemp has called the bill “unacceptable” for how it divvies money among states, giving more weight to places with higher unemployment, compared to the Trump-era formula.

The White House has already announced that Biden will sign the bill Friday.