Saving the Atlanta BeltLine: A shift from transit to micromobility 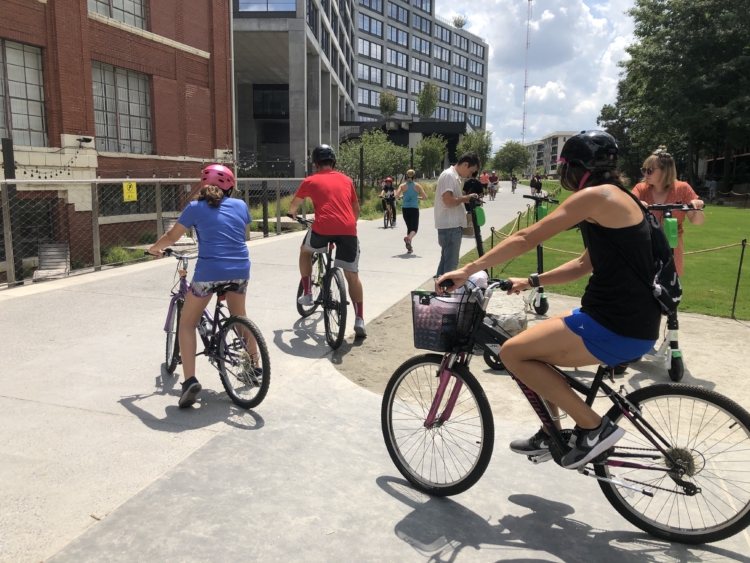 Cyclists prepare to merge onto the Atlanta BeltLine, where they are to share space with e-scooters, joggers, pedestrians, and other cyclists - all modes traveling at varying rates of speed. Credit: Kevin H. Posey

By Guest Columnist KEVIN H. POSEY, who writes about transportation and has served on related boards in the Washington region. He moved to Atlanta in 2017.

Atlanta’s BeltLine is perhaps the city’s best-known landmark. As with New York’s High Line, travel writers point it out as a key stop for those visiting Atlanta. However, that popularity poses a threat to its viability as a usable transportation corridor. 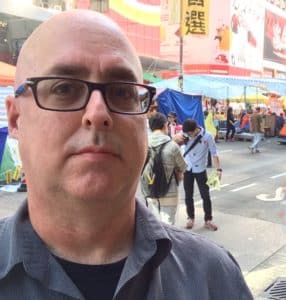 The BeltLine is over capacity and in need of expansion. To alleviate this congestion, the long-dormant streetcar plan for the corridor should yield its unused right of way for a second, parallel path for users on wheels, such as those on bikes and scooters.

Such an addition would allow pedestrians to enjoy the path without risk of collisions, while those on wheels would be free to reach their destinations quickly and without impediment. The Atlanta BeltLine would, therefore, fulfill its promise as a significant transportation corridor, but without the high costs associated with a rail transit option or the decimation of the trees along the route.

The corridor on which the Atlanta BeltLine runs today was originally a series of railroads built in the late 19th and early 20th centuries as bypasses of downtown Atlanta. The city’s central railyards suffered from frequent congestion as freight trains mixed with passenger trains on their way through downtown. As passenger rail traffic declined and interstate trucking took off, the need for these bypasses wound down.

In 1999, Georgia Tech graduate student Ryan Gravel came up with a conversion plan for his master’s thesis, which focused on replacing the now-abandoned BeltLine tracks with a two-track streetcar line. The concrete path was later developed in conjunction with the PATH Foundation.

The BeltLine’s rail component is now a planned feature of Atlanta’s streetcar plan. The city currently has only a short line connecting the area near the Georgia World Congress Center with the Sweet Auburn neighborhood. This line, along with the entire plan, was recently put under the responsibility of the city’s heavy rail and bus system operator, MARTA. 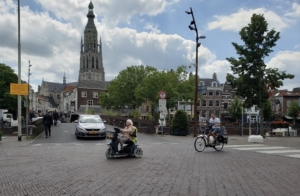 Transit systems such as streetcars don’t exist in the Dutch city of Breda, because they are made redundant by mobility devices including bicycles and electric scooters, as well as walking. Credit: Lourdes López-Castro

Roughly half of the planned loop now has a concrete trail, with the busiest section being the Eastside Trail. According to information provided by Atlanta BeltLine, Inc., approximately 70 percent to 80 percent of users are pedestrians, while 20 percent to 30 percent are cyclists. Approximately 6,000 cyclists per day passed the Ponce City Market counter in the summer. Scooters only began to appear in the spring of 2018, so that mode has yet to be fully measured.

However, a stroll along the path near Ponce City Market shows that scooters are now one of the dominant modes on the BeltLine. That’s astonishing, as the use of scooters and e-bikes was technically illegal on the path until 2019. However, this rule was ignored by nearly everyone, including the police.

Complaints by pedestrians and cyclists about scooter user behavior led the City of Atlanta to ban them from sidewalks, but did legalize their use on the BeltLine. In June of 2019, the city began the process of requiring scooter-share companies like Bird, Jump, Bolt, Lyft and Lime to enact a geofence on the BeltLine that would limit speeds to 8 MPH. 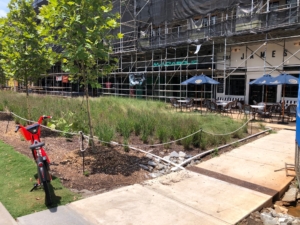 Seemingly every new building along the Atlanta BeltLine has its own access point to the trail, where users will try to merge on or off a path where others are traveling by foot or wheel at a variety of speeds. Credit: Kevin H. Posey

Unfortunately, limiting rentable scooter speeds won’t fix the speed differential problem. Privately owned scooters won’t be geofenced. Conventional and privately-owned e-bikes won’t be affected either. No posted speed limit exists on the path, so it’s hard to see what legal framework exists to eliminate the yawning speed differential between those on foot and those on wheels.

That’s a real problem, because usage will only rise. Nearly every new residential and commercial complex along the BeltLine features direct access. That means more people will be stepping or scooting out onto a single path filled with people traveling at varying speeds. Walking out of a restaurant onto the path on busy Saturday will be akin to pulling onto a 12-lane freeway from a stop sign.

Detouring wheeled users from the BeltLine to resolve the speed differential crisis would require the creation of a bypass route with safe, separate lanes along streets. Yet such a scheme would pose significant problems for user safety and comfort. The parallel routes are:

Both involve busy, multilane road crossings at-grade. The rolling terrain would also be a challenge to user comfort, particularly for those who aren’t in peak condition.

Putting the BeltLine’s streetcar reservation into service as a paved path for wheeled users would make the entire corridor safer and more comfortable. This eliminates the speed differential between those on wheels and those on foot, while retaining the most direct connection between popular destinations along the BeltLine like Piedmont Park, Ponce City Market, and Krog Street Market. 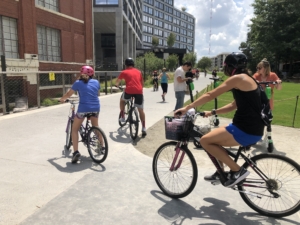 Cyclists prepare to merge onto the Atlanta BeltLine, where they are to share space with e-scooters, joggers, pedestrians, and other cyclists – all modes traveling at varying rates of speed. Credit: Kevin H. Posey

Significantly, easing congestion will ease use of the BeltLine for those with mobility impairments. Providing space for users in motorized wheelchairs means that they need not deal with cumbersome transit vehicles like a streetcar. Even with level boarding, space within transit vehicles for the physical dimensions of a wheelchair can sometimes be unavailable due to crowding.

Yet with a parallel, wheels-only path, accessing their destination would be as simple as pulling out on the BeltLine and setting off. That’s likely why such users are a common sight in Dutch cities like Breda, which is laced with separated bike paths. Neither a streetcar nor local service bus is to be found, as they are redundant.

In the end, it’s unlikely that many BeltLine users, regardless of ability, will wait on a streetcar to go 2.5 miles, the initial phase along Eastside Trail, instead of using more readily available micromobility options like scooters and e-bikes. As Deloitte Insights recently pointed out:

Given that a survey by Atlanta BeltLine, inc., shows that building the streetcar is not even in the top three of the public’s priorities, it’s probably time to focus a bit more on a inexpensive fix for today’s BeltLine congestion problems than a costly, long-delayed streetcar line.

Note to readers: This article originated as a project for a bike infrastructure certification course offered via the Dutch Cycling Embassy and DTV Consultants in Breda. 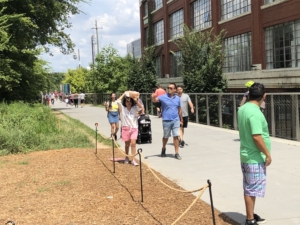 Space gets tight along the Atlanta BeltLine, even in this lightly populated moment where users include pedestrians, cyclists and couple with a baby stroller. Credit: Kevin H. Posey 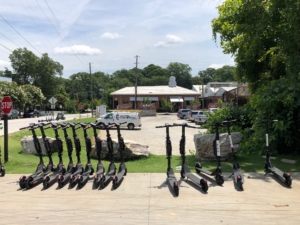 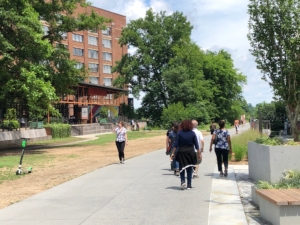 Pedestrians fall into a pattern of walking on their right side of the Atlanta BeltLine. An e-scooter is available for a rider to join the mix at any moment. Credit: Kevin H. Posey