The region’s transit agency sends an important message in its first major report related to the crisis that is the coronavirus pandemic. The ATL remains bullish on transit and its future. 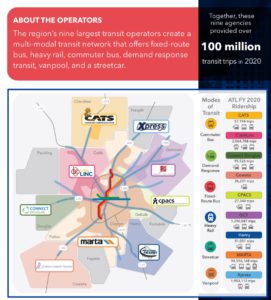 The report contains no indication of wavering commitment to transit within the state agency. The Georgia Legislature established the ATL in 2018 to provide a more unified transit system in the 13-county metro area by knitting together the region’s various transit providers.

The ATL’s 2020 Annual Report and Audit provides a 150-page snapshot of the region’s transit programs, to include some of the agencies’ challenges and successes.

The report acknowledges the setback presented by the pandemic and repeatedly cites projects that can move forward, such as electric transit vehicles. 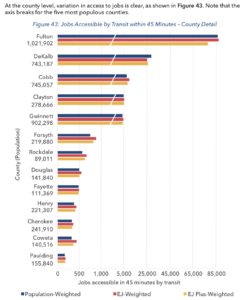 Fulton County has the greatest number of jobs in metro Atlanta that can be reached by transit within a 45-minute commute. A dramatic drop in access via transit is noted in surrounding counties. Credit: ATL

Examples of hope expressed by local transit leaders include: 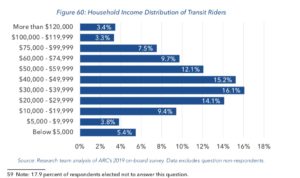 45% of transit riders in metro Atlanta report annual households incomes in the range of $20,000 to $49,999, according to ATL’s annual report. Credit: ATL

The report’s conclusion cites some of the great unknowables about the exact composition of transit. The presumption is that mobility needs will not return to their pre-pandemic shape even if COVID-19 fades as a threat to public health.

The question of where folks will work and reside is among the unknowables. Telecommuting may continue, reducing travel demand to job centers in submarkets in Perimeter, Buckhead, Midtown and Downtown Atlnanta. The ATLs report observes:

This is one of the sections where the glass-half-full aspects of the report appear, in statements including the following. The boldface text is in the ATL’s report:

The ATL and MARTA are collaborating on initiatives including the BRT route to MARTA’s Five Points Station. Credit: Kelly Jordan 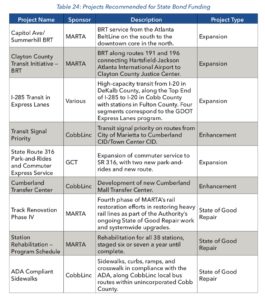 Despite uncertainty related to the pandemic, the ATL board voted in September to send a list of nine projects with a total cost of about $2 billion for consideration of state bond funding. The list went to the Legislature and Governor’s Office of Planning and Budget. Credit: ATL